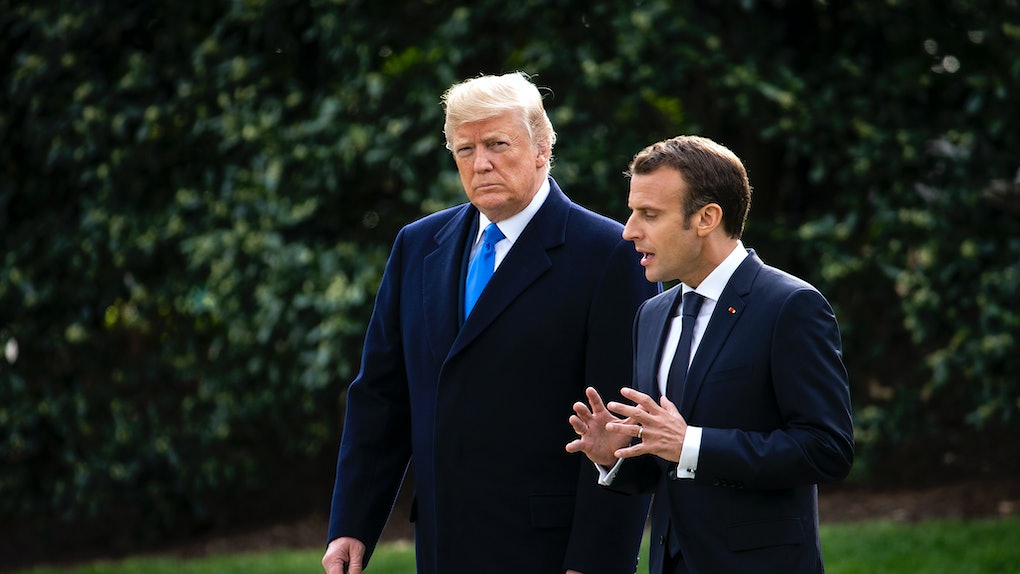 Here's some serious irony to start your week off strong. Back in April 2018, President Donald Trump met with French President Emmanuel Macron in Washington, D.C and did some gardening to solidify their "bromance." However, it looks like Donald Trump and Emmanuel Macron's friendship tree has died, according to reports. Cue eyes emoji here.

On Monday, June 10, French news outlet France24 reported that Trump and Macron's "friendship" tree did not survive after the two world leader's planted the oak in the White House front lawn. During a visit to the United States in April 2018, Macron gifted Trump with a baby oak tree as a symbolic gesture to represent the two men's "bond." However, the tree was apparently nowhere to be seen a few days following the planting, after it was apparently moved to quarantine. Former French Ambassador Gérard Araud addressed the missing oak via Twitter on April 28, 2018. He wrote,

It is in quarantine which is mandatory for any living organism imported to the US. It will be replanted afterwards.

While Araud claimed the tree would be replanted, it hasn't happened as of yet — and per France24, it never will, as the tree reportedly died in quarantine. The White House did not immediately respond to Elite Daily's request for comment on the tree's fate. The fact that the presidents' friendship tree has apparently met its end could symbolize the two men's tumultuous relationship over the past year. While many believed Trump and Macron had solidified a "bromance" during the April 2018 visit, recent events might show that the relationship has turned sour.

Macron's initial meeting with Trump was full of hugs, handshakes, and even shoulder brushing, but the two world leaders have disagreed on a matter of issues, such as climate change, trade negotiations, and more. While speaking to Congress on April 25, 2018, Macron delivered a speech that pointedly pushed against Trump's controversial views on immigration. He said,

We have two possible ways ahead. We can choose isolationism, withdrawal, and nationalism. This is an option. It can be tempting to us as a temporary remedy to all fears. But closing the door to the world will not stop the evolution of the world. We have to keep our eyes wide open to the new risks right in front of us.

Macron didn't confirm whether his reference towards "closing the door" was a jab at Trump's border wall or pulling out of the Paris Climate Agreement, but it's definitely up for speculation.

In November 2018, Trump fired back at Macron by claiming the French president holds an approval rating of 26% at the time and criticized the country's unemployment rate of reportedly 10%. In December 2018, the French president had an approval rating of 23% in the midst of the "yellow vest" protests in France, per Reuters, while the country's unemployment rate sat at about 9.1% in October 2018, per CEIC Data. Trump wrote,

The problem is that Emmanuel suffers from a very low Approval Rating in France, 26%, and an unemployment rate of almost 10%. He was just trying to get onto another subject. By the way, there is no country more Nationalist than France, very proud people-and rightfully so!........

While Trump isn't a stranger to airing criticism on Twitter, it really couldn't have come at a worse time. Trump's tweet towards Macron fell on the three-year anniversary of the November 2015 Paris terrorist attacks, in which attackers in Paris, France killed 130 people and injured nearly 500.

Clearly Macron and Trump's "bromance" was short lived, and now it looks like even Mother Nature isn't on their side. Oh, the irony.