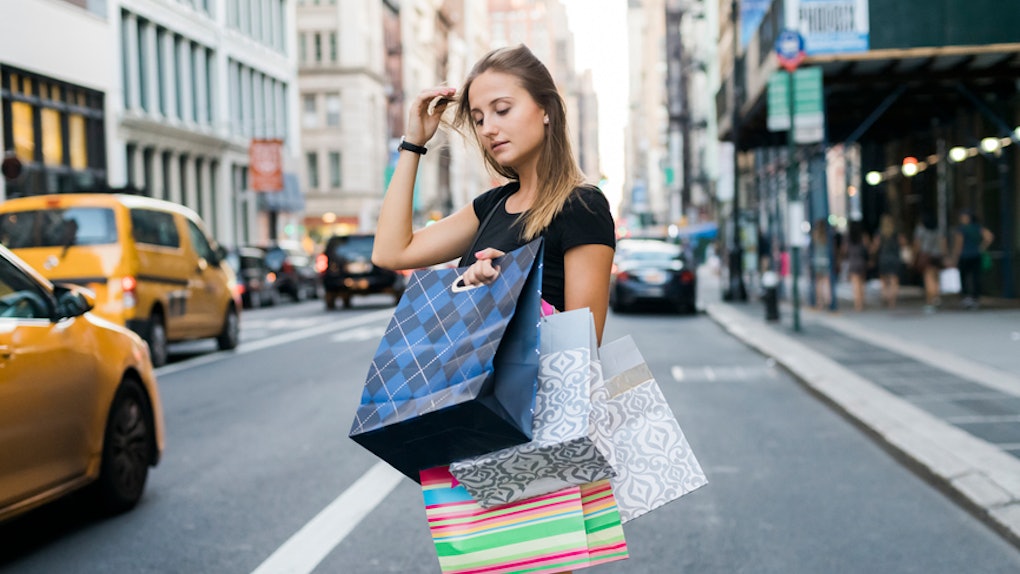 Does Retail Therapy Work? Here's How To Treat Yourself When You're Feeling Down

Chances are, if you’re reading this article, the headline resonated with you in one way or another. Maybe you’re a closeted shopaholic, and the musical “ding” of a register cementing your shiny new purchase ignites all the warm, fuzzy feels when, really, seconds ago, smoke was rolling off your eardrum as a result of you and bae getting into it, again. Believe me, I’m not going to dispute the fact that ducking into Barnes & Noble doesn’t make me feel exponentially better when I’m upset about virtually anything, but does retail therapy really work? According to Clarissa Silva, a behavioral scientist and creator of Your Happiness Hypothesis Method, shopping in moderation does have “positive impacts on mood,” but in the long run, you really can’t shop your emotions away.

If you’ve never heard of, let alone engaged in, retail therapy, the concept is in the name: using retail for therapy. Let’s say you didn’t do so hot on a school project worth 40 percent of your grade. Rather than venting your frustrations to a friend, or sitting down with the professor to go over material you didn’t fully grasp, you end up in the checkout line at Forever 21 with an assortment of yoga pants and five oversized sweaters that were on clearance.

Envisioning yourself working on your fitness in neon spandex or getting cozy in a new blue knit makes you feel good, sure, but what does it do for your academics? Not much, right? That's because retail therapy is usually more of a band-aid for your woes than a long-term solution, and even though you might be consciously aware of this, there's no denying the fact that spending money makes you feel good.

Refinery29 reports that retail therapy gives you a false, but nonetheless satisfying, sense of control when life isn’t exactly going your way.

Dr. Danielle Forshee, a doctor of psychology and licensed clinical social worker, tells Elite Daily the root cause of retail therapy is distress.

“When an individual experiences sadness,” she explains, “their sadness triggers a positive value on new products.” This is probably why, when you’re at your lowest, you just might find yourself window-shopping through the mall.

Sure, there’s value in material things (my collection of Jane Austen novels, for instance, is sacred, and autumn just wouldn’t be the same without my pair of distressed combat boots), but in the context of retail therapy, it’s usually not the physical objects that make you feel better; it’s what they represent. In a recent interview with Refinery29, Amy Morin, LCSW, psychotherapist and author of 13 Things Mentally Strong People Don’t Do, explained,

When life is chaotic, we might go, "what's something I can do?" [Shopping] gives you sort of a false sense of control in the moment. A lot of the time, people are disappointed that the item they bought doesn’t bring them the happiness that they predicted.

It’s true what they say, you know, that money really can’t buy you happiness, and neither can material goods, because at the end of the day, it’s just a lot of stuff taking up a lot of room in your living space. What will make you happy, however, is pinpointing what’s actually making you upset, and taking the necessary steps to work through it.

If shopping makes you feel even the tiniest bit better, that’s great, but there are ways to ensure your bank account doesn't take a beating in the process.

You can be fully aware of your emotional-shopper status and still be taken aback by the stressful consequences of your actions. Suddenly, you’re being sent obscenely large bills from credit card companies that you weren’t ready for, and TBH, that big, fat dollar sign on a “what you owe” slip is enough to make anyone stress out. Because retail therapy is usually something you do on a whim when you feel upset, it might not be the first thing you think about when budgeting for the month, but this is one of the few times you actually can plan for spontaneity.

ABC News reports the results of a 2014 study performed by Harvard, Carnegie Mellon, Stanford, and Pittsburgh University researchers, which showed just how much your emotions can affect your spending. In the study, a group of 33 people were each paid $10 to participate in the research, and were then split into two groups: One group watched a sad video about the death of a boy’s mentor, while the other watched a more emotionally neutral film about the Great Barrier Reef in Australia. After watching their respective videos, the participants were offered a deal to use some of their research compensation to buy a water bottle. According to the study's results, those who watched the sad video were more willing to spend money and make the trade. Since the study “used real commodities and real money,” the researchers wrote, the “results hold implications for everyday decisions." In other words, retail therapy is real AF, and your feelings in the present moment can have a huge impact on how you spend your money.

Now, in order to make sure you don’t go too overboard on spending when it comes to engaging in some healthy retail therapy every now and then, Dr. Forshee suggests setting aside a certain amount of money to dip into when you’re feeling vulnerable. The trick, she tells Elite Daily, is to set a hard limit and stick to it.

“You shouldn’t carry credit cards or debit cards,” Forshee warns, “and only carry that certain amount of cash put aside for these moments.”

There’s nothing wrong with treating yourself on a bad day, but the best thing you can do is ensure your purchase is something that can actually help you cope with your emotions in the long run.

Here’s where retail therapy can backfire: TIME reports the results of a 2015 study published in the Journal of Consumer Research, which found that the things you buy in a fit of rage or sadness might feel satisfying in the moment, but in the long-term, they often serve as a kind of trigger that can actually make you feel worse, by reminding you of whatever made you so upset in the first place. Ah, the joys of symbolism.

Plus, a new blouse or pair of shoes might make you feel nice when you wear them, but this kind of shopping isn’t going to change the fact that you and your partner aren’t seeing eye to eye on something, nor will it help you understand and ace that calc final. Bottom line: When something’s festering deep down inside you, clothes and gadgets probably aren’t the best buys.

The next time you're feeling weak in the knees and desperate for a shoe-shopping spree, back away from the mall and take a second to reevaluate what your needs actually are. Instead of cashing in on a fresh pair of Nikes, browse through the journal selection at Target, instead. Writing can be extremely therapeutic, and if the limitation of lines makes you antsy, bullet journals are great because there are no restrictions — just blank pages to fill with your thoughts and feelings.

If writing isn't your thing, there are a ton of self-help books that aren't super cheesy (You Are A Bad*ss by Jen Sincero, for example, is a gem), and might shed some wisdom that'll actually help you grow as a person.

All in all, material goodies are nice, but they really are just stuff. If retail is your therapy, that's fine — just make a game plan for yourself, stick to it, and invest in things that will help you feel better in the long run.

More like this
12 Unique Maid Of Honor Gifts On Etsy Worthy Of Laughs & Happy Tears
By Marisa Casciano
Lauren Conrad's Amazon Handmade Mother's Day Gift Ideas Under $40
By Rachel Chapman
When Will Cricut's Mug Press Restock? You Don't Have To Wait Any Longer
By Rachel Chapman
Stay up to date