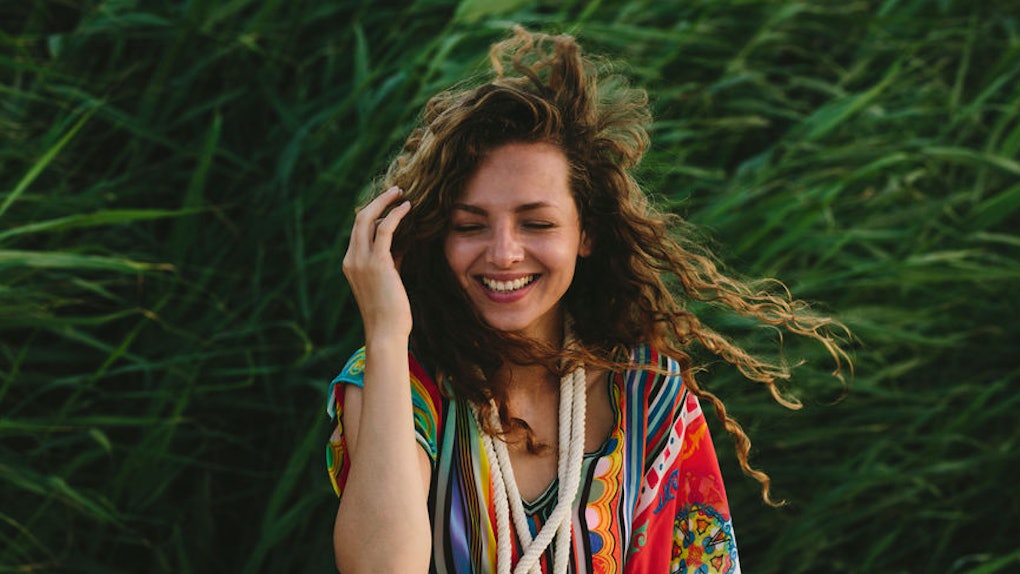 Does Positive Thinking Really Work? Science Says It Busts Stress Better Than Anything Else

Once upon a time, I was a sucker for pseudo health trends. Granted, this was before researching buzz-worthy products and programs in the space to determine whether or not they were actually legit was my job. Still, you can’t deny truth, and the truth is, there are a lot of pseudo health and holistic trends out there that you really shouldn’t buy into, like drinking raw milk straight from a cow’s udder, or gulping down bottles on bottles of unfiltered water. However, there are some "it" trends that are actually the real deal. For example, positive thinking really does work, and science has the statistics to back that up. In other words, you know all those times your mom and dad told you “life is all about attitude”? Well, it wasn’t just their clever way to get you to stop whining; it was actually some pretty solid life advice.

Why yes, I do know how cheesy this all sounds, but seriously, can you really hate on an honest attempt to try and spread a little positivity in the world? If so, sorry not sorry, but I’m judging you. In all seriousness, though, actively putting in the work to change a negative thought into something positive is the real deal. No, happy thoughts won’t exactly make you fly like folktales of Peter Pan might’ve led you to believe once upon a time, but it can definitely uplift your mood a little bit and possibly shed light on an otherwise dark and gloomy situation. My advice? Don’t knock it ‘til you’ve tried it.

Got stress? Science says focusing on the positives in life can outweigh any negative mojo you might be harboring.

I’m sure you’ve had moments when you’ve gabbed to a girlfriend or trusted co-worker about something that was eating away at you — like a blowout with your SO, or feeling under-appreciated at the office — just to get it off your chest. But what if you were to take those frustrations out on paper? Or better yet, what if you could find way to let it all out in ink and identify the positives in the situation to help you flip your perspective on the whole thing?

To find out if positive thinking really works, researchers recruited 71 participants between the ages of 19 and 77 years old and split them into two groups. In the study, which has been published in the British Journal of Health Psychology, one group was instructed to log “the most wonderful experiences of their life” for 20 minutes per day for three consecutive days, while the second was told to spend the same amount of time writing about more neutral subjects, like what they planned on doing later that day. After comparing the participants' anxiety levels before and after the experiment, the research showed that those who wrote about positive experiences had less stress, anxiety, and physical complaints than those scribbling on about their daily to-dos.

Now, is this a coincidence? The researchers think not. Michael Smith, an author on the study and an associate professor of psychology at Northumbria University in Newcastle, explained in an article for The Conversation that the participants who wrote down positive thoughts reported four weeks out from the experiment that they were still feeling significantly less stressed and anxious, “regardless of the levels of distress” they were battling at the start of the study.

So what exactly is it about the act of shifting your thoughts from negative to positive that lifts some of the weight that stress can push down on you?

Well, in order to understand the benefits of positive thinking, you have to know what it means to put positive thinking into practice in the first place. Per doctor of psychology and licensed clinical social worker, Dr. Danielle Forshee's breakdown, thinking positively really is as simple of a concept as it sounds, in which the content of your internal self-talk is positive, not negative.

"The content of what you say to yourself is usually automatic, and most of us do not pay close enough attention to if we’re having these thoughts in the first place," Forshee tells Elite Daily. "If you notice the content of your automatic thoughts, you have the choice to change that content from negative to positive."

You know that old saying, "you are what you eat"? Basically, what Forshee's getting at here is this: you are what you think. And, believe it or not, there's science to prove that, too: "Research suggests that when you’re thinking negative thoughts or remembering sad events, the brain decreases the amount of serotonin production," she says, adding that the more serotonin your body produces, the more positive you'll feel. So it's pretty self-explanatory, right? The more you redirect your thought process to positive ideas, the more positive your outlook will be overall.

Now that I have you sold on the concept, let's explore how you can start putting positive thinking into practice ASAP.

This is definitely one of those "easier said than done" situations, but I promise you, there's power in positive thinking. The trickiest part of it all is to put it into practice. So on that note, where do you start?

In an interview with Elite Daily, Clarissa Silva, a behavioral scientist, relationship coach, and creator of the Your Happiness Hypothesis Method, says your first order of business should be to re-evaluate your own logic and self-talk. From there, you can identify negative thoughts and eliminate them one by one. "By making it a daily practice to use positive thinking, it rewrites our chemistry and our ability to create happiness as your emotional default mode," Silva says. "The best ways to enhance these levels are by making it a practice to consciously focus on positive outcomes."

Once you can get into a routine of putting negative thoughts into perspective and identifying what's true from what's false, as well as what can be turned into a positive, a great next step is to write down what your'e thankful for. In fact, Chris Devecchio, a health and wellness expert and founder of Premier Mind & Body, encourages his own clients to regularly draft gratitude lists. In doing this, he tells Elite Daily, you're able to "start connecting with all the amazing things in life that have been clouded with the negative storytelling."

If writing isn't really your thing, though, Robert Glatter, M.D., an assistant professor of emergency medicine at Lenox Hill Hospital, Northwell Health, suggests acknowledging all the things you're grateful for by "thought blocking," in which you "actively replace negative thoughts with positive images of serenity, peace, and cooperation." Hey, it's worth a shot, right?