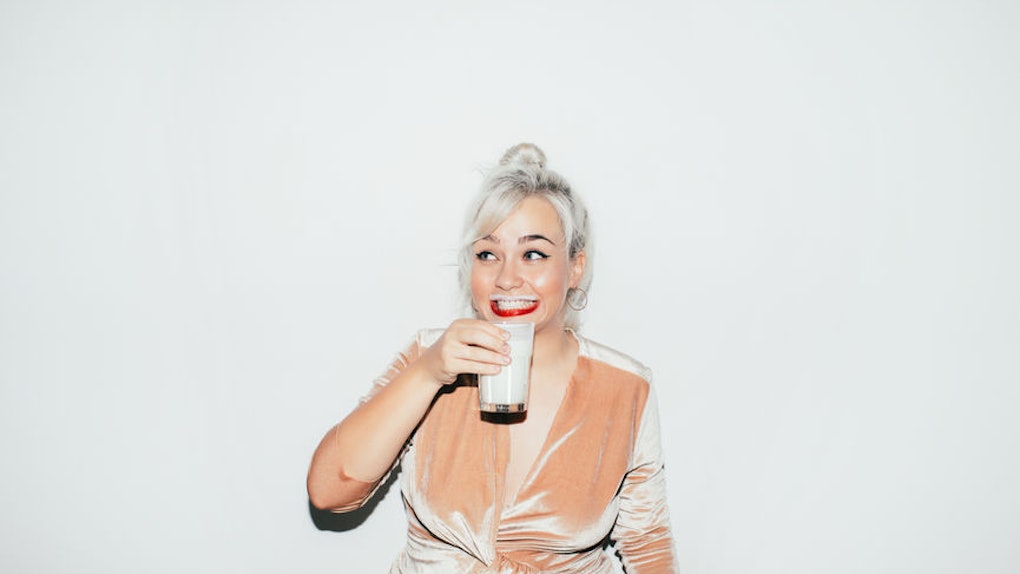 Does Milk Give You Phlegm? You Don't Have To Avoid Dairy During Flu Season, Science Says

I know it’s hard to believe, but autumn isn’t all pumpkin spice and everything nice; it has its fair share of flaws, too. One major downer that comes to mind (though, IMO, there aren’t many) is that cold-and-flu season is just a few weeks away. The worst part is that symptoms of the common cold can be hard to shake, but if you’re trying to figure out what foods to avoid when you’re sick to ensure whatever bug you might catch doesn’t stick around, science is issuing out an FYI that milk doesn’t cause phlegm, despite what your grandma may tried to tell you all these years. So now that that horrible myth is being debunked, you can continue adding a dash of dairy to your morning cup of tea or coffee, even when your throat is sore and your nose is stuffy.

After all, cold-and-flu season is nothing to joke about, people. Last year, my husband and I bounced a nasty bout of germs back and forth, to the point where both of us were interchangeably ill for almost an entire month straight. It was absolutely miserable, and you better believe I’m not trying to repeat that mess in the months to come. To ensure both of us stay healthy through our favorite season, I’ve been doing lots of research on the best ways to avoid catching even a hint of a cold, and even what lengths to go to if either one of us wakes up feeling congested one day. Milk has definitely been flagged as something to avoid until you don’t have to clear your throat every five seconds, but according to new research, it’s all a bunch of BS: Dairy, especially milk, isn’t going to make your body produce more phlegm, so if you just bought a gallon when the sniffles start, you don’t have to toss the jug.

In his research paper, published in the medical journal Archives of Disease in Childhood, respiratory consultant Dr. Ian Balfour-Lynn of London’s Royal Brompton Hospital backtracked through history to figure out where the rumor that milk causes phlegm originated from. Basically, according to a media release of Balfour-Lynn’s findings, way back when in the year 1204, a Jewish spiritual leader and court physician by the name of Moses Maimonides concluded that milk causes the body to produce more mucus, "while chicken soup might get rid of it." Fast-forward to 1946, when leading pediatrician Dr. Benjamin Spock published his book, The Common Sense Book Of Baby and Childcare, on the subject, and pretty soon, this theory that milk causes phlegm was taken for fact by parents everywhere.

So, after reviewing countless studies in which parents had avoided giving their children dairy, Balfour-Lynn concluded that there’s really no scientific evidence to support the idea that milk causes phlegm to form in the body, but rather, as outlined in his paper, that drinking milk when you’re already phlegm-y can cause the mucus to feel thicker. See, because milk is an emulsion — aka a combination of droplets of one liquid mixed into another — of fat and water, when milk meets saliva, the result is a stickier substance that’s harder to swallow. “This may explain why so many people think there is more mucus produced, when, in fact, it is the aggregates of milk emulsion that they are aware of lingering in the mouth after swallowing,” Balfour-Lynn wrote.

And, BTW, Balfour-Lynn definitely isn't the first person to debunk this myth. Dr. James Steckelberg, a consultant in the Division of Infectious Diseases and a professor of medicine at the Mayo Clinic School of Medicine, agrees with Balfour-Lynn’s philosophy: When asked if people should avoid drinking milk or consuming any dairy when battling a cold, Steckelberg told Mayo Clinic that while dairy definitely has an effect on mucus, in that it “makes phlegm thicker and more irritating to your throat,” milk doesn’t make your body produce more phlegm. In fact, Steckelberg said, you might actually want to add a select few dairy items to your grocery list when you feel under the weather because of the health benefits they provide. “Frozen dairy products can soothe a sore throat and provide calories when you otherwise may not eat,” Steckelberg told the health organization. I don’t know about you, but I’m definitely going to interpret that as a doctor’s approval to eat mint chocolate chip ice cream when I have a cold.

Think about it this way: Unless you have a milk allergy, the probiotics in dairy products like yogurt are necessary for your body, especially when you’re taking antibiotics for a cold or flu, consultant nutritionist Dr. Rupali Datta, told NDTV Food. As for hoarding pints of Ben & Jerry’s to soothe a sore throat, Datta suggests going easy on the stuff (ugh, bummer): “Ice cream and other cold dairy products should be avoided as they irritate the stomach and throat,” Datta told the outlet. “Eat and drink what you are comfortable with, there are no hard and fast rules regarding dairy products.”

So, if you're still iffy on dairy despite this recent debunking, don't drink milk or eat ice cream until you feel comfortable doing so — after all, who really wants to make phlegm feel worse than it already is? Stick to sipping on things like hot water with lemon, or tea with honey, to soothe a sore throat and warm your chill. You can also sleep with a humidifier in the room to loosen congestion in your nose and throat overnight, and pretty soon, you'll be feeling as good as new.