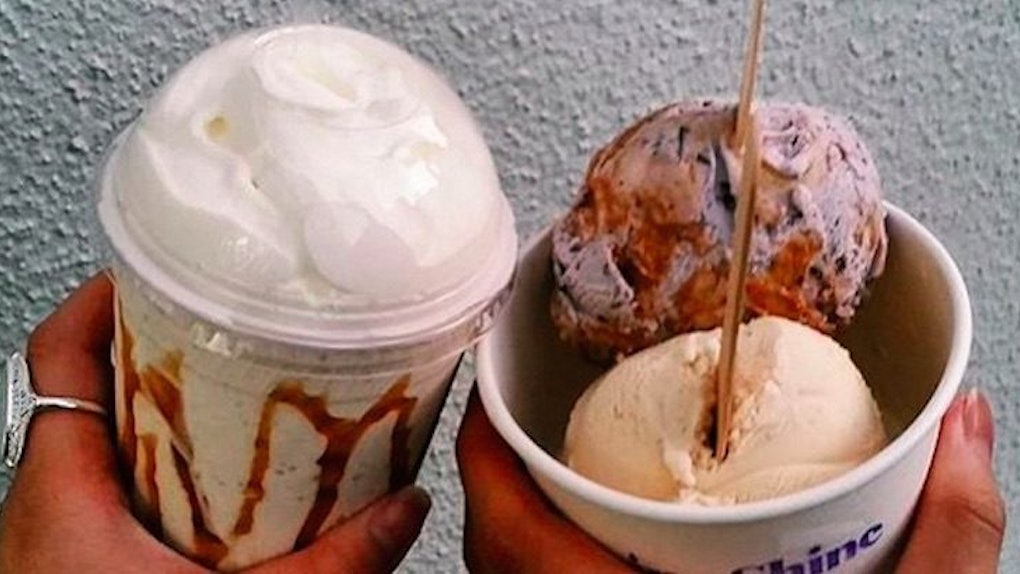 Not only are they proven to be dangerous for your system, but they are also difficult to maintain. Think about the last time you did a juice cleanse: How soon after did you run to your nearest McDonalds and order the largest fries you can get your grubby hands on?

But lately, with my fluctuating weight and permanently unhappy stomach, going on a dairy-free diet for two weeks didn’t seem so bad. There’s even an entire support site devoted to the cause!

If you have a dairy allergy or are lactose-intolerant, you already adhere to the dairy-free life, and for that, you deserve medals and monuments erected in your honor. Seeing as my stomach is somewhat questionable around milk -- especially when it’s not cooked through in a meal or processed in some way -- I decided to add another challenge to myself: no soy, almond, coconut, or lactose-free milk. Basically, there was no cheating here.

Besides, if ditching milk is what supposedly gave Megan Fox her body and Victoria Beckham her skin, who am I to complain?

Day One: There is milk in everything.

Doing this diet the day after National Ice Cream Day might’ve not been a good idea. My Instagram is still littered with soft-serve and Klondike bars (which still exist and are still good as f*ck).

Naturally, our office got a greek yogurt delivery from Chobani today in my name — it’s like they knew and I couldn’t have any. I spent today crying at my desk and looking up #fitspiration quotes on Pinterest.

I also realized I just bought an entire box of Eskimo Pies and they’re just chilling in my freezer, so I'll have to give them to my roommate to avoid temptation.

This was a terrible idea.

It's three thousand degrees outside and I need an iced coffee. Literally staring down this b*tch with a venti caramel thing from Starbucks and this close to throwing her on the train tracks and stealing her drink. This is a judgement-free zone, okay?

Anyway, I am sad that my skin isn’t a glowing beacon of sunshine yet. Twenty-four hours sans dairy seems long enough to notice a major difference in my complexion, right?

I’m not sure whether it’s the lack of dairy or if my hormones are out of whack, but the past few days I’ve wanted nothing more than some good ‘ol fashioned raw fish slathered in spicy mayo and soy sauce.

Ladies that have gone milk-free: Do you have any weird cravings? Is this what pregnancy is like?

Seeing as my substitutes are also on my personal blacklist, finding ways of keeping cool in 90-degree weather without iced coffee is hard.

Starbucks recently launched their Mango Black Tea Lemonade, which is basically liquid crack for those that can’t fathom the thought of chugging an iced coffee, ever.

Day Five: Wait, this is supposed to be good for me?

TMI warning: The past few days, my stomach has been angry as f*ck. Like, literally going to the bathroom every hour, on the hour angry.

Studies show that the lack of dairy in China is a contributing factor to the low rates of breast cancer in the country. Basically, ditching milk is supposed to cure all your problems and yet, all it’s done for me is make me irritable and go to the bathroom 19 times a day.

I’m not sure what’s causing the irritability. My guess is the major change in dietary patterns has somehow messed up my digestive system, and now my stomach is rebelling. Hey, if it happens to my pets every time I switch up their food, should I be surprised that it also happens to humans?

Day Six: It’s not that bad.

Megan Fox said the secret to her insane body has been going dairy-free. So far, I’m not seeing any weight loss, but that might be because I haven’t stepped foot into a real gym in a month.

To be fair, studies don’t link cutting out dairy with weight loss. Don’t do this if you want to lose a couple pounds quick — you’re better off ditching sugar or alcohol for that.

Even though my weight hasn’t changed at all, I’ve noticed my pores seem somewhat smoother. I even briefly considered not wearing makeup today and then decided that that’s a stupid idea and who do I think I am, Kate Upton?

Victoria Beckham might’ve been on to something here.

If you spent all morning looking up doughnuts on Pinterest, chances are, you’re going to want them for lunch.

After stuffing my dairy-starved face with cocoa nibs and dough, I was oh-so-quickly informed that some doughnuts are, in fact, made with milk.

Wait — did I really want my first foray back into milk-hood to be in the form of a doughnut? After a near-perfect week, I wasn’t sure I wanted to give up everything I worked so hard for, for a doughnut.

Day Nine: Wait, my skin is like, really good now.

No, but really. It’s not perfect — I have way too much acne scarring for that — but the random oil patches and dry bits seem to have gone on vacation on someone else’s unlucky face.

Went makeup-free after work today and didn’t hate it. That’s a start.

Starting to forget what happiness tastes like. Sure, I have the complexion of a f*cking fairy princess now, but I think I’m getting angry because it’s doing virtually nothing to my weight.

I really want a cookie. Or pizza. Or cake. Or all three at once, so then I can sh*t myself into oblivion later.

Day Twelve: I didn’t make it.

Today was Pizza Friday at work. While I avoided the catered lunch siren call last week, this week it just wasn’t gonna happen and goddamnit, pizza smells, tastes and pretty much exudes deliciousness.

I had two slices. No regrets.

Final words? Don’t do this if you’re trying to get ready for bikini season or something equally stupid. Do it to get good skin in a week. Do it because you will chug iced tea by the gallon and not feel bad.