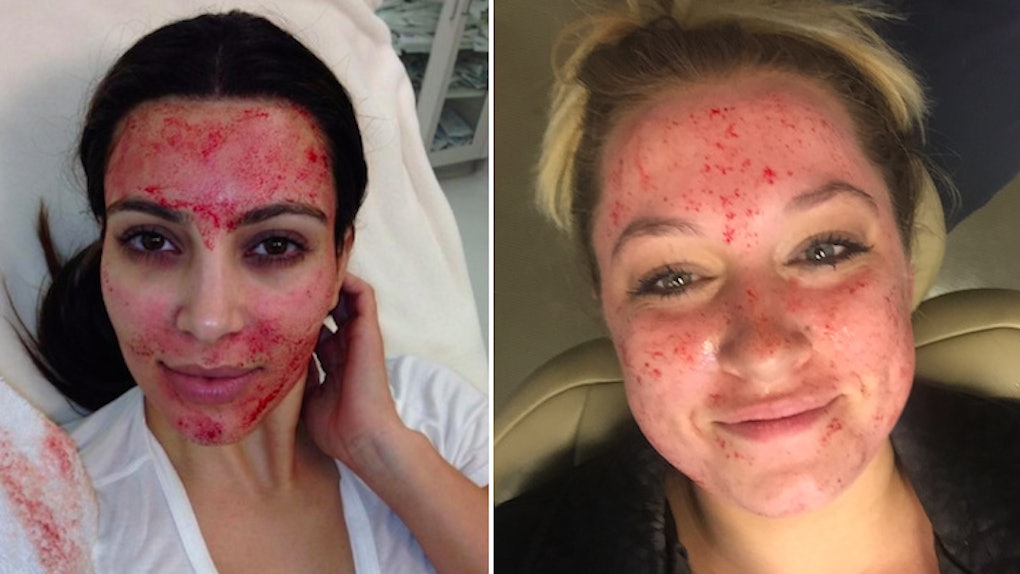 I've had sh*t skin since I was 12 years old. I started getting the typical puberty acne in seventh grade, but as years went by, I realized I was dealing with full-on acne, not just puberty pimples. At 23 and lots of topical creams later, it was getting worse. So one day, I basically said "enough of this bullsh*t." I got a new doctor, went on the most intense antibiotic you can go on before taking Accutane, and miraculously, that treatment worked. Now the problem was my acne scars. Enter microneedling. My first question was, does microneedling work? I had heard about the Kardashians utilizing the procedure as a way to keep up their skin flawless, and I was intrigued.

The RealSelf team was the miracle workers who helped me really tackle my acne scars for the first time. Some of my scars are over 10 years old, so I had serious doubts that anything could make something that had been so permanent on my face for so long go away. But the Kardashians swear by it, and it's honestly the most shocking development of my life that I now take their word on skincare hacks as law. (Being a celebrity writer changes you, fam.) But even the Kardashians weren't born with flawless skin. It actually takes a lot of work to keep your face looking that way, and no, I'm not talking about botox.

According to RealSelf, microneedling has increased in popularity by 84 percent since last year, and I'm willing to bet it's at least partially because of Kim and Kourtney Kardashian. Over the years, they've posted pictures and videos on their various social media accounts showing them getting microneedling done. You might've heard about them getting something called a "vampire facial." That's basically the same thing RealSelf did on my face, but with some alterations. Where a vampire facial uses your own blood in the microneedling process as a way to reinvigorate your skin, the microneedling I had done utilized an organic cream intended to have a similar effect.

So what is microneedling?

Microneedling (also known as collagen induction therapy) is a minimally invasive treatment to rejuvenate the skin. A device with fine needles creates tiny punctures in the top layer of the skin, which triggers the body to create new collagen and elastin. Results can include improved texture and firmness, as well as a reduction in scars, pore size, and stretch marks. Microneedling may also be combined with a topical treatment, like PRP (platelet rich plasma) or another vitamin-rich serum.

Basically, microneedling uses a bunch of tiny needles (that kind of look like they're in a tattoo gun) to wake your skin up and make it think, "Oh, crap! We have things we need to fix!" With the help of the various serums/blood you choose (I just couldn't get down with the whole blood thing, personally), your skin ends up looking refreshed and it even helps get rid of the bags under your eyes!

The first thing my aesthetician, celebrity aesthetician Graceanne Svendsen, did when I got to the Shafer Plastic Surgery & Laser Center in Manhattan (run by Dr. David Shafer, a RealSelf contributor) was wipe my face completely clean of makeup and dirt. Next, she applied a numbing cream to my face and let that sit for about 20 minutes. Fun fact: My face started getting really red and inflamed when this numbing cream started to kick in. I couldn't feel the redness myself because, well, my face was numb. But Svendsen noticed the redness and immediately asked me if I have rosacea (a skin condition that basically makes your face look permanently sunburned). I said, "My dad does, and I didn't think I did. But I have a feeling you're about to diagnose me with it." She responded saying that most people don't react at all to the numbing cream and that she's only seen people with rosacea react the way I was. Awesome, great, cool, genetics! So I learned a lot more about my skin than I expected that day. This is all to say that there's no need to worry about this numbing cream causing any damage if you do have rosacea — my face didn't hurt, it was just a little inflammation that went away after the procedure was done. If you don't have rosacea, you're good.

So when my face is numbed, that means I'm ready for the microneedling. Svendsen picks up her electric microneedling gun thingy (#sciencewords) and starts to rub our selected serum on one small area of my face. Then she starts to needle the serum into my skin. I can't remember which part of my face it was, so let's say the first spot was the side of my cheek where my scarring is the worst.

Once she starts the actual microneedling, I feel nothing but slight vibration on my face. The numbing cream really works, fam. She kind of rubs the needles over the selected area, and all the while I'm aware that it's probably making my face bleed. This is typical in microneedling, so there's no alarm there. If I were to have gotten that vampire facial, however, this blood would've been put into a machine that gets the plasma out of the blood and we would've injected that into my face (that's the platelet rich plasma part). Side note: Did anyone else donate their plasma at BioLife during college when they were broke and needed $50 to go out? Hahahaha, me neither!

This is what my face looked like once she had finished all of the microneedling, but before she wiped off all the blood. I sent these photos to my mother sans context and she screamed:

Sorry, Mom! I'd be lying if I said there weren't parts of this procedure that didn't hurt. The places where your skin is the most taut are the only places where the microneedling kind of hurts. But it hurts like a small tattoo does: It's not comfortable, but you're not actually in pain. After I took all of the needed selfies and sent all of the needed Snapchats (it was almost Halloween, I had people to scare!), Svendsen wiped my face clean and applied their special makeup that allowed me to go outside without people noticing that my face was bright red. After getting microneedling done, your skin will be red and very sensitive. I was instructed not to touch my face with anything for the following 48 hours and to avoid sunlight.

But once those two days had passed, guys... my skin literally looked reborn.

Not only did my acne scars look a lot less noticeable, but also the dark circles under my eyes were basically gone. WHAT?! I was not aware that would happen, but I freaking welcomed that sh*t with open arms.

This is what my acne scars looked like before microneedling (literally minutes before the procedure started):

Note that my face is completely acne-free (a miracle for my skin, TBH). That's one of the requirements of microneedling: You can't have any active breakouts by the time of the procedure. So all of the spots you see are years-worth of acne scarring. You can tell they're a mix of purple and red scars.

And this is what they looked like just 48 hours later:

This is just after one procedure! Svendsen says six treatments total would make the scarring nearly disappear completely. I haven't gotten another microneedling session done yet, but given the results, I most definitely would. Now a little over a month later, my skin is still perfectly clear (other than the small breakouts I get when I'm on my period), and the circles under my eyes are making their way back. Hey, what can ya do? Trump is president, I lose sleep *insert upside-down smiling emoji here to show that I am still kind of dead inside*.

TL;DR: Microneedling helped reduce the appearance of the acne scars I've been accumulating since I was 12 years old and got rid of my dark under eye circles as an added bonus. 10/10.

More like this
I Tried Singing While Running Like Miley Cyrus & OMG, My Lungs
By Rachel Varina
Kim Kardashian Asked Addison Rae If She's Hooking Up With Kourtney Kardashian
By Joyann Jeffrey
A Kim Kardashian Skin Care Line May Be Coming Soon
By Margaret Blatz
Stay up to date