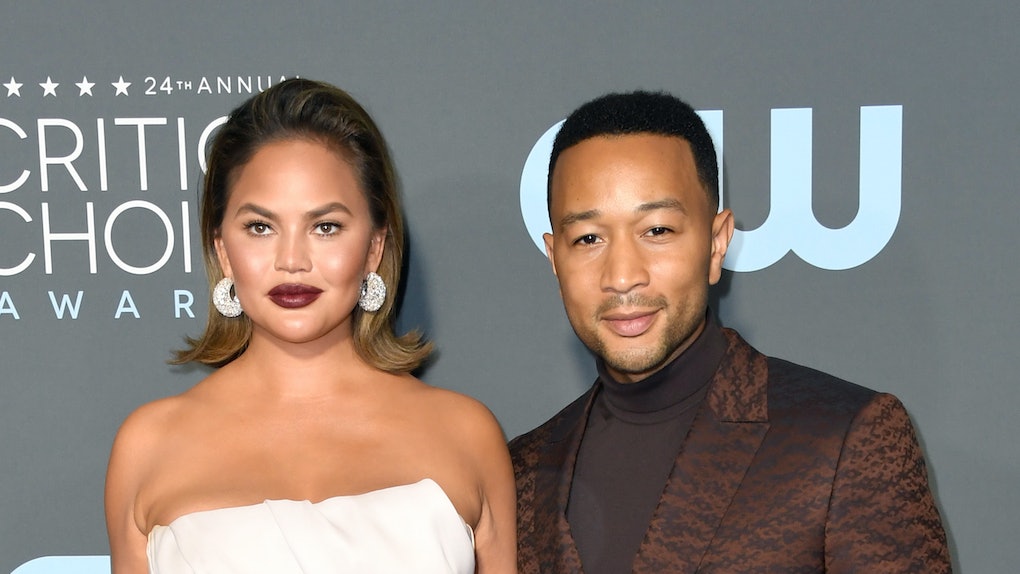 Does John Legend Like Chrissy Teigen's Tweets About Him? He Just Revealed All

We all know, love, and appreciate the Queen of Twitter, Lip Sync Battle host and cookbook author Chrissy Teigen. She's quick-witted and delivers burns left and right before anyone can even think of dishing anything back. Naturally, this is my kind of idol, but I've always been curious to know what her EGOT-winning husband thinks of Teigen's epic roasts about him. So, does John Legend approve Chrissy Teigen's tweets about him? He just revealed that when it comes to Twitter, Chrissy trolls him without much input from him because this is Chrissy Teigen we're talking about, people!

On Tuesday, Feb. 19, Legend appeared on The Ellen DeGeneres Show when the topic of whether or not his wife comes to him for pre-approval of any tweets that have to do with him. The answer, of course, is a big, fat NOPE — though he does admit that she sometimes asks for his opinions on her other, non-John related tweets.

"She runs some tweets by me, but she never runs the ones when she's talking about me by me," Legend said. "We're, like, next to each other on the couch and she'll have this devilish look on her face like she's, you know, conniving some kind of devious plan."

I'm hoping that Teigen's "devilish look" resembles something like this:

Hey, at least John Legend agrees that Teigen's tweets about him are always spot-on and hilarious, and even he can't deny that fact. Legend did also admit that he thinks his wife is "funnier and cooler" than he is (sorry John, but you're right) and gave her props for being able to multitask tweeting and taking care of their two children, 2-year-old Luna and 9-month-old Miles.

And in case you want to hear something less hilarious and more heartwarming: Legend also went on to speak about how their son resembles him in so many ways, and how their daughter takes after Teigen.

"It's funny because he looks more like me as an adult than he looks like me as a baby," Legend said of little Miles. "Like, he's me."

"When Luna gets jealous, she doesn't take it out on Miles, she just wants our attention more," Legend said of their daughter. "So she'll just, like, make more noise and when I'm holding Miles she'll say, 'Daddy, hold me. Hold me too! Hold me too!'" Legend continued. "And then she laughs because she thinks it's so funny. She's like, 'You're holding two babies! Haha!'"

"She's a little Chrissy," DeGeneres said, which Legend confirmed, saying, "She is, though. She is."

Once again, can confirm.

You can watch the whole interview with Legend below — and you're going to want to, because it's equal parts funny and precious:

And just so we end things on the right note, I'm just going to leave a few Chrissy Teigen tweets that troll John Legend here for you to peruse:

I know, I know. You're welcome, guys. All hail Chrissy Teigen.