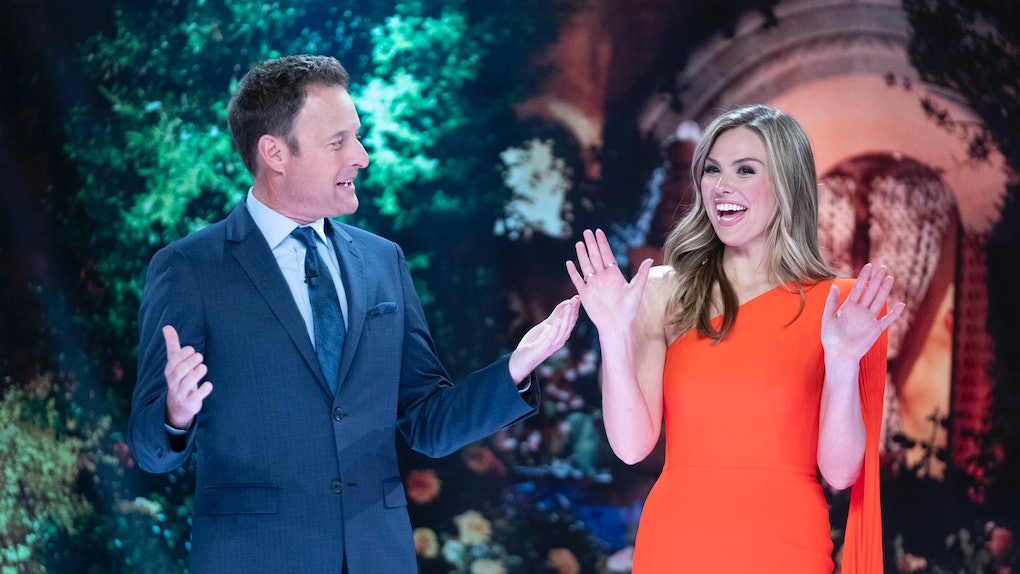 Does Hannah Get Engaged At The End Of The 'Bachelorette'? Chris Harrison Teased Her Ending

By now, Bachelor Nation has recovered from Colton Underwood's fence jump and his subsequent decision to date Final Rose pick Cassie Randolph rather than become engaged. It's too early to say whether the couple's choice has removed some of the franchise's pressure to propose, but Hannah Brown's upcoming Bachelorette season will be the first test of this theory. Does Hannah get engaged at the end of The Bachelorette? Chris Harrison has teased that her finale might hit a bumpy patch.

ICYMI, footage of Hannah's season ahead of its premiere definitely hasn't been lacking. In addition to plenty of quick previews on ABC and a lengthy season teaser during the Bachelorette reunion special, host Harrison confirmed the names of Hannah's 30 contestants in a Facebook Live video on May 7. Thanks to these clips, eagle-eyed fans already have a sense of Night One's most memorable entrances, a contestant who misbehaves from the start, and potential villains. But despite the amount of footage that's already public, one crucial part of the season is being filmed at the last minute, meaning Harrison has recently spoken to press without knowing who receives Hannah's Final Rose.

The Bachelorette typically films from mid-March to early May, and Season 15 followed that schedule, but it's premiering on ABC about two weeks earlier than usual. Speaking to The Hollywood Reporter in a interview published May 7, Harrison said, "[Filming is] still going. The Bachelorette is always a really quick turnaround. With The Bachelor, we wrap early for the holidays, but with The Bachelorette, we’re so pressed for time that we’re shooting right up until the day we premiere."

So, as the fairy godfather of Bachelor Nation, did Harrison have an idea of whether an engagement was in store for Hannah? He got brutally honest with Entertainment Tonight, saying:

I wish I could guarantee [a proposal], but I cannot deliver… It might be a bumpy finish. Sitting here now, I really don't know how it's going to end. I am hopeful and she is hopeful, but the way she wants to find love and the way she is going about this is really true and sincere. She is not just going to do it to do it, and as rough as it has been and as wild as it has been, I am not sure she is going to be able to get there. And that is because she doesn't know if she will be able to get there.

Ouch. We've all been in a position of something not going the way we hoped, but the rest of us probably haven't done this on national TV with thousands of viewers critiquing our every word. It'll be tough to watch Hannah if heartbreak is in store, and Harrison even implied to ET that this season's men acted so ridiculously that they distracted Hannah from forming deeper connections.

"It's just stuff she has to deal with constantly, and every time we think we're over it, it rears its ugly head and she has to get back in," he said. "It really got to the point where honestly, it started taking away from her being the Bachelorette. It took away from the entire season and the chance for her to find love, and it may cause her not to find love at the end of this."

This doesn't sound great, but I have my fingers crossed that Hannah manages to walk away from her Bachelorette experience with a smile on her face. We're rooting for you, girl!

More like this
What Would An LGBTQ+ 'Bachelor' Season Look Like?
By Abby Monteil
Zac Clark's Quote About His Relationship With Tayshia Adams Post-'Bachelorette' Is Honest
By Corinne Sullivan
JoJo Fletcher & Jordan Rodgers’ Relationship Timeline Proves ‘The Bachelorette’ Can Work
By Lydia Wang
Stay up to date