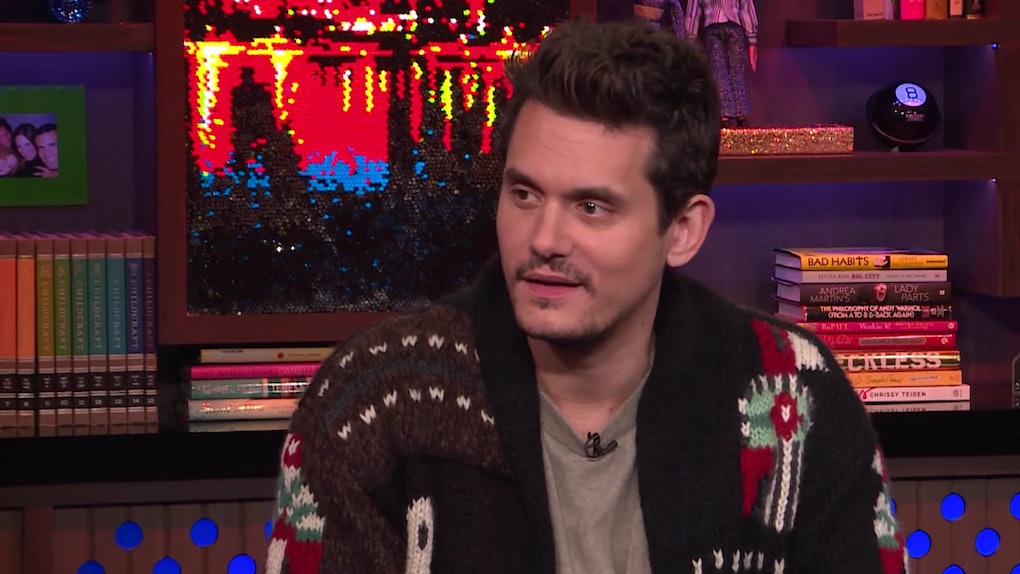 Do John Mayer & Katy Perry Still Talk? Musician Admits He Once Texted Her At 4 AM

Look, we've all been there. You're a music legend... your ex-girlfriend is a pop icon... it's 4 a.m. and you're thinking, "Hm, I wonder what she's up to." You might be wondering, do John Mayer and Katy Perry still talk? Of course they do. And by "of course they do," I mean Mayer admitted he texted her on her birthday in the middle of the night, which is kind of the same thing as still talking.

YOU GUYS KNOW WHAT I MEAN. LIFE AND LOVE IS HARD BUT BEAUTIFUL.

Mayer joined the clubhouse on the show Watch What Happens Live With Andy Cohen and got really candid about where he stands with his ex Perry. (Also, Bob Saget was there. I don't know why. That part was weird.) Cohen is known for making his guests feel incredibly comfortable, and they sometimes forget they're on TV entirely. This seemed to be the case with Mayer.

Mayer seemed to settle into his lounge chair pretty quickly and didn't hesitate when it came to answering questions about Perry. Cohen asked him if he tuned into Katy Perry's massive four-day live-stream event she threw as part of promotion for her Witness album, and the answer was a solid yes.

(You guys know the live-steam event I'm talking about... that thing when she set up cameras in house Big Brother-style and we all spied on her for four days?)

Mayer very nonchalantly was like, "Yeah. I did [watch it]."

I think you'd have to watch all 96 hours to get the final verdict. That's her thing, man — to go big and bold. Yeah, I checked in with it. It's definitely odd to watch your ex-girlfriend asleep.

You make a strong point, Mayer.

However, the "Body Is A Wonderland" singer continued to describe a feeling we've all had time to time, explaining why he sometimes checks in with his ex.

... By the way, it would have been almost weirder if you didn't check in. You were together for years... If someone's living their life... ?"

That's right. The way I see things now, I call it 'stand in the middle of the boat.' If someone says, 'I don't watch that,' it's like, 'Yes, you do.' You know? It's like, if you want to text someone... I texted Katy happy birthday. It was four in the morning. It was like a post-midnight, haven't-gone-to-sleep-yet, it's-technically-your-birthday send. Because how weird is it to be like, 'I want to say happy birthday now, but I'm going to wait until tomorrow afternoon?'

Sometimes playing games is worse than just being honest about wanting to reach out at an inappropriate hour to say something small, and overthinking it only makes things more dramatic.

John, you're speaking to my heart. You should make a career out of it or something.

Plus, we all remember what Perry said about Mayer during that live stream. (Hint: That he's the best lover she's ever had. *GASP*)

Perry sheepishly ranked her ex-boyfriends in bed during a game of "Spill Your Guts Or Fill Your Guts" with James Corden, and Mayer came out on top... or bottom... depending on what you're into. (Thank you! I'll be here all night!)

The point is: Don't feel embarrassed, John. We get you. Deep down, we're all hoping you and Katy get back together and deliver us the weirdest, most beautiful, musically inclined babies the world has ever seen.

Text me anytime. Seriously. I'm up.