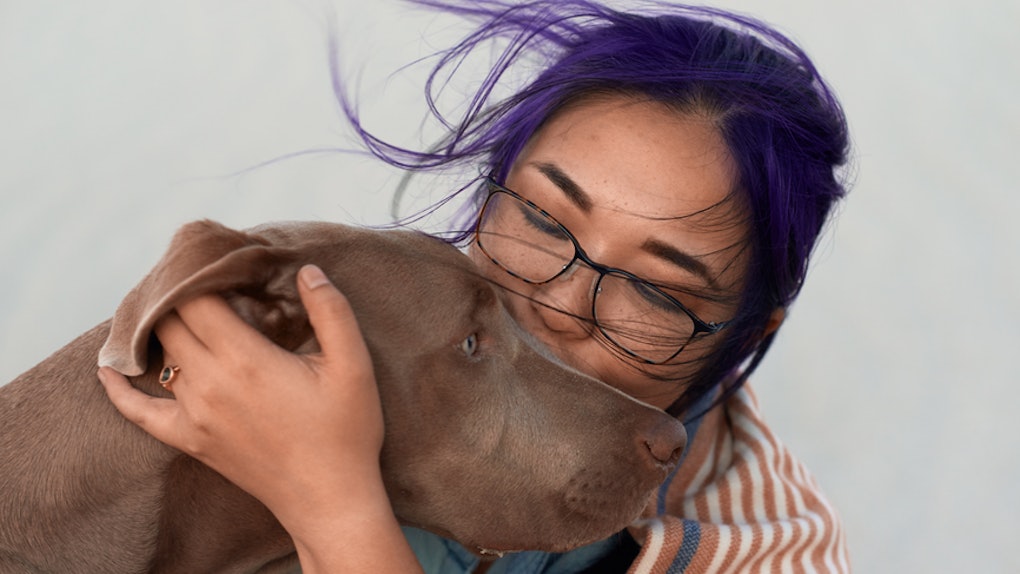 If you have a dog, there's a pretty good chance they're one of your best friends. They're good listeners, they're always down to snuggle, and they prove to you that it's possible to be in a good mood every single day. Unfortunately, you can't always spend every second of every day beside your pup, so when you do have to leave them home alone, it probably makes you a bit anxious. If you've ever wondered whether dogs like music, and if putting on some jams might make them feel a little less lonely while you're away from them, then you'd be barking up the right tree, so to speak. As it turns out, your pooch might just love all your playlists as much as you do — or, they might not.

The research on animals' responsiveness to human music is all over the charts, as you might imagine, but there are some central truths that seem to correlate across the board: Pets (like your pup) might not have much of an opinion either way when it comes to human music, but some tunes might serve to relax them when they're in a kennel, or in an otherwise isolated setting for long periods of time.

The connection between dogs and music is best explained by first diving into why anyone — human or animal — likes the music that they do.

According to Live Science, both animals and humans tend to prefer music that reflects their own vocal ranges.

This phenomenon is called "species-specific music," and Live Science reports that the theory essentially argues that both humans and animals enjoy pitches, tones, and tempos that are familiar to them. In fact, scientists like Charles Snowdon, an animal psychologist at the University of Wisconsin-Madison, have been working to create species-specific music that proves this theory, using fast-paced tempos for monkeys and cats, for instance.

This doesn't necessarily mean that dogs don't love your music. In fact, larger dogs have very similar vocal chords to that of adult males, Dr. Snowdon explained in an interview with Live Science, so that may be why your golden retriever loves listening to Justin Timberlake as much as you do.

Some research suggests your dog, like you, can differentiate between music genres. Spoiler alert: Reggae might just be their favorite jam.

Although dogs tend to show pretty neutral responses to most kinds of music, there's some evidence that shows they have a preference for some jams over others.

In a 2017 study done by the Scottish SPCA and the University of Glasgow, researchers played different types of music through the speakers of an animal shelter to see how the dogs would respond. The Washington Post reports that, generally speaking, the dogs in the study were all "less stressed" when listening to any of the music genres, though study co-author Neil Evans, a professor of integrative physiology, said in an interview with the publication that the responses were mostly "mixed" across the board — with the exception of two genres: Upon closer analysis, the researchers found that the dogs had a "slight preference" for both reggae and soft rock.

So, if you feel the need to make a "doggy and me" playlist on Spotify, go heavy on the Bob Marley.

If your dog doesn't seem to respond at all when you put music on for them, don't worry, because that's totally normal, too. Most of the research that looks at how dogs respond to music is pretty mixed overall, and every dog seems to react differently to various kinds of music.

But if you do want to play music around your dog, opt for more relaxing tunes, and see how your dog responds to them. The studies on the relationship between dogs and music preferences may be able to send you in the right direction (toward reggae or soft rock, it seems), but there's no conclusive evidence that dogs actually prefer listening to music over no noise at all.

Above all, keep in mind that music doesn't have to be the shared connection between you and your pooch. You have plenty of other ways to connect with one another, and you shouldn't have to give up Selena Gomez for anyone or anything.