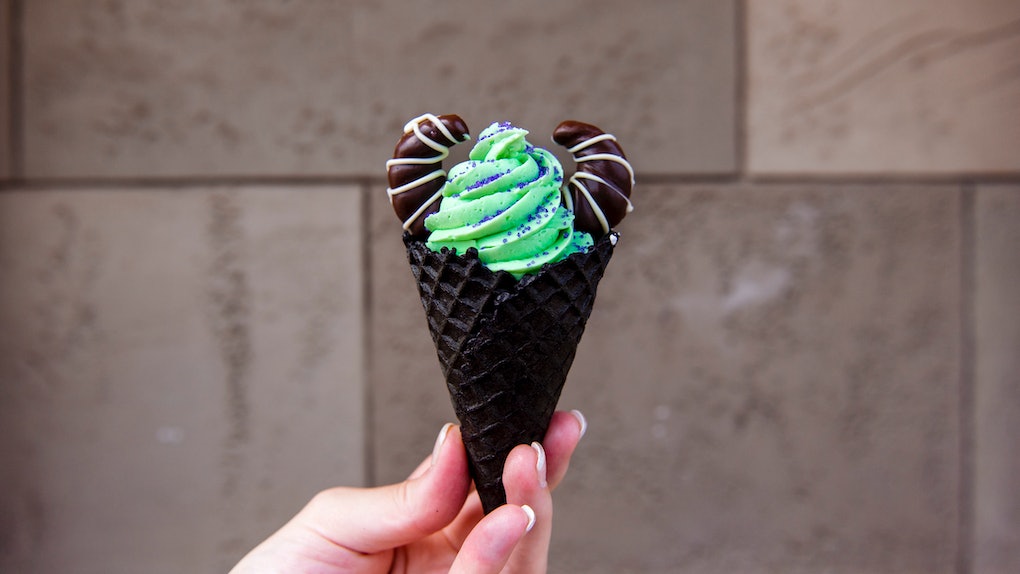 Disney has been slaying the theme park food game this summer, delighting park-goers with 'grammable confections like Mickey Mouse Beignets, Mermaid Donuts, and Pineapple Cotton Candy. Now things are taking a spooktacular, albeit even more delicious turn with the changing of the seasons, and my taste buds have never been so ready. Get ready to jump on the Halloween train early, because Disney's Maleficent Soft-Serve Cone is serving all the fall magic right now.

Like it or not, summer is coming to a close, and Disney is helping visitors bid adieu to sunkissed skin and patio weather with a lineup of tantalizing treats that'll have you saying summer, who? Disney World totally jumped the gun on commencing the spooky festivities on Aug. 17 with the first night of Mickey's Not-So-Scary Halloween Party, and I'm already salivating over the theme park goodies that are on offer. While the Magic Kingdom's Candy Corn Milkshake and the Hitchhiking Ghosts Cream Puff stood out as potential fan favorites, none caught my eye quite like Maleficent's Soft Serve Cone. It's a (sleeping) beauty, and it's the perfect in-between treat that'll make you reconcile the fact that you're breaking out the Halloween garb when it's still 80 degrees outside.

According to Instagram users, the concoction is basically lime Dole whip soft serve encased in a dark chocolate cone that's then topped with chocolate horns and purple sugar. Honestly, it's almost too photogenic to eat, and it'll have you cackling and channeling your inner Disney villain in no time.

Per blogger The Most Magical Foodie, the citrus-infused treat is being sold for just $5.29 at Fantasyland's Storybook Treats in the Magic Kingdom, and it's completely delicious. "I can't get enough of the Lime Soft Serve!!" she wrote. "This cute and yummy dessert was a must!!"

Based on commenters' reviews, the soft serve will be a favorite for anyone who likes a strong lime flavor, which means that you might want to try another one of the park's Halloween treats if you're not the biggest fan of sour soft serve. According to WDW News Today, the Maleficent's base is the same as that of the Peter Pan Float (also served at Storybook Treats), so expect something similar but with a sweeter finish due to the sugar sprinkles. Several bloggers commented that they wished that Disney had replaced the lime soft serve with a mint chocolate chip variety, although I personally think that would have been a much less creative option.

A word of caution: Aspiring Disney Princess noted that while she loved the creation, the black waffle cone turned her tongue black, so take a moment to check before you take any Instagram photo-ops. Although that might just add to the scary theatrics. Just saying.

Unfortunately, like all of Disney's limited-edition Halloween treats, Maleficent's Soft Serve Cone will be gone when the clock strikes midnight on Oct. 31. To be honest, it's probably a good thing that the Magic Kingdom decided to cut into summer to give us a little extra time to sample their range of decadent evil treats. Break out the cobwebs and a horned headdress, because channeling a Disney villain has never been so delicious.