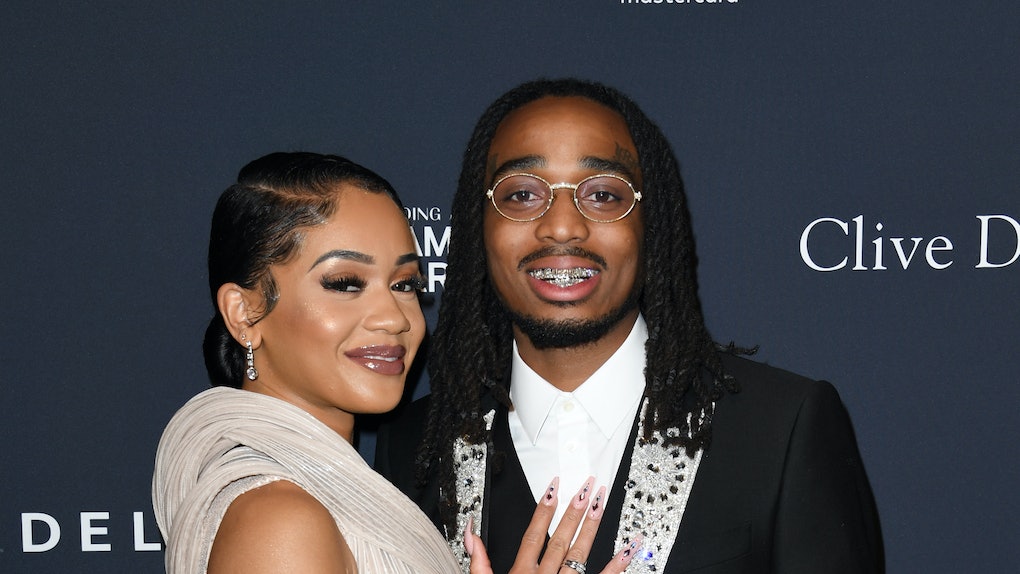 Did Quavo Have Saweetie's Bentley Repossessed? Here's The Reported Scoop

I'm sorry to any of you who were loving the drama of it all, but Quavo reportedly did not have Saweetie's Bentley repossessed. Not sure what I'm referring to? Let me backtrack for a second. Shortly after Saweetie publicly announced she's "single," the internet became abuzz with rumors Quavo retaliated by repossessing the Bentley he'd gotten the "ICY GRL" rapper for Christmas 2020. It's a juicy story, but, according to TMZ, the rumors were reportedly not true.

"Rumors were swirling this weekend that the Migos rapper had his now ex's luxury ride repossessed as payback for breaking up with him so publicly this past week — but we're here to tell you definitively... there's simply no truth to it," the publication wrote on March 21. "Sources directly connected to Quavo tell TMZ... he didn't repo the Bentley, and anything suggesting otherwise is flat-out false."

Rumors Saweetie and Quavo had split first started swirling on March 15, when fans noticed she had unfollowed him on Instagram. Shortly after, he unfollowed her as well. On March 19, she seemed to confirm the news on Twitter. "I’m single. I’ve endured too much betrayal and hurt behind the scenes for a false narrative to be circulating that degrades my character," she wrote. "Presents don’t band aid scars and the love isn’t real when the intimacy is given to other women." (Elite Daily previously reached out to Quavo's rep for comment on the breakup but did not hear back in time for publication.)

A few hours after Saweetie's tweet, Quavo seemingly responded with a tweet of his own. "I had love for you and disappointed you did all that. You are not the woman I thought you were. I wish you nothing but the best," he wrote alongside the praying hands emoji. Saweetie simply responded, "take care."

Quavo and Saweetie started dating in 2018 after he slid into her DMs on her Instagram. In November 2020, some rumors emerged that Quavo might have been unfaithful. But those were swiftly shut down by Quavo, Saweetie, and the woman he was accused of having allegedly cheated with. The Bentley came as a gift to Saweetie less than a month after those cheating rumors first emerged.

More like this
When Are Ariana Grande & Dalton Gomez Getting Married? Here's The Reported Tea
By Corinne Sullivan
Matt James & Rachael Kirkconnell Are Reportedly Not Speaking For A Sad Reason
By Candice Jalili
Did Pete Davidson Confirm He's Dating Phoebe Dynevor? Here's Why Fans Think So
By Corinne Sullivan
Stay up to date