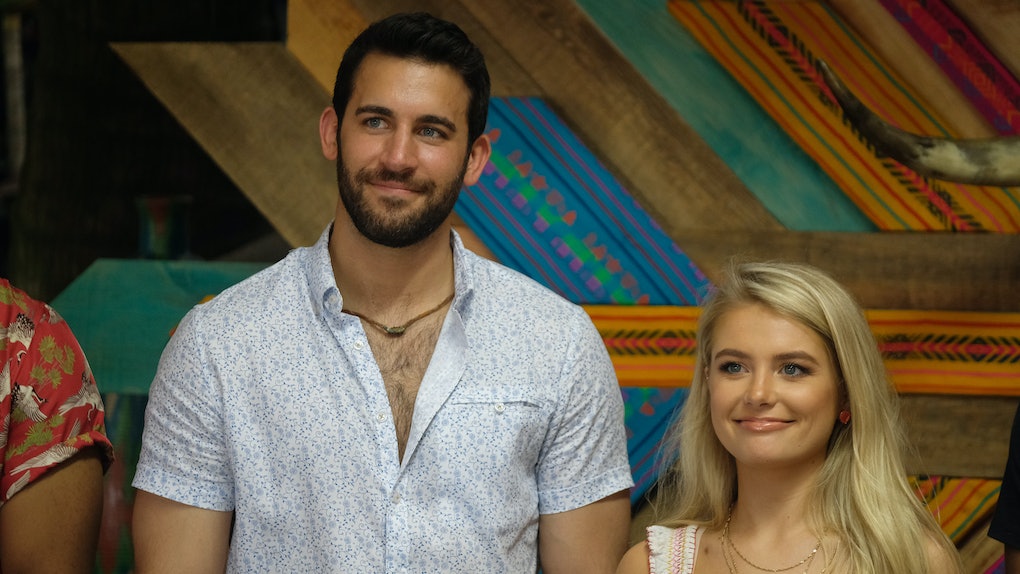 Friendships aren't often celebrated on the Bachelor franchise as much as romances are, but the budding respect between Bachelor in Paradise contestants Derek Peth and Demi Burnett is definitely becoming an iconic bond on Season 6. Torn between Derek and a woman she was dating at home before the show, Demi confided in Derek about her confused feelings, and both on and off camera, Derek has been super supportive of her, regardless of his own romantic feelings. Derek's tweets about Demi's Bachelor in Paradise drama prove that even today, he's still got her back regardless of what happened on the beach.

Despite clicking with Derek from the start of Paradise, Demi was balancing her feelings for him alongside her attachment to Kristian Haggerty, a woman she was dating back in Los Angeles. She told Bachelor BFF Hannah Brown pre-Paradise she was reluctant to label the relationship, but a few weeks into filming, Demi couldn't stop thinking about Kristian even after telling Derek about the relationship.

"I don't have Kristian around me," Demi said in an interview. "It's easy for people exploring options here because all of their options are here, and one of my options is not here. That's where it gets a little difficult for me."

Following a surprise cameo and advice from Hannah in Aug. 19's episode, Demi told Derek about her struggles. He continued to be a solid advocate. "I really care about you," he told her. "It's OK to not know how you feel, but I just want to keep showing you who I am. I'm not giving up now. I don't know that 'fight for you' is the right word, but ... I want you in my life."

After the episode, Derek stood up for Demi and her conflicted feelings on Twitter. No surprise, but his response is well-crafted and mature.

"As you all watch this, I want to ask that you have as much empathy as you can for Demi," the former Bachelorette contestant tweeted. "I've seen some really hurtful things being said that don't reflect how I feel and I lived this ... I think it's unfair to assume we should all be clean slates bent on getting engaged because we're on a show. This is our lives and we're all just people seeking meaningful connections."

In addition to missing Kristian on Paradise, Demi was still coping with the aftermath of telling people about her sexuality. Having to work through those feelings on your own is one thing, but to do it while filming a reality TV series is a whole other obstacle. It's good to know Derek has lived up to Paradise's mature portrayal of him during Demi's conflict, and Demi definitely appreciates the words of support. She retweeted his messages and replied to him, "You’re a hero. Thank you for being you."

At the end of the Aug. 19 episode, Demi requested to speak with host Chris Harrison, but fans will have to wait until her reason for doing so is revealed. However, it seems that no matter what happens between them, they will still have a solid bond.