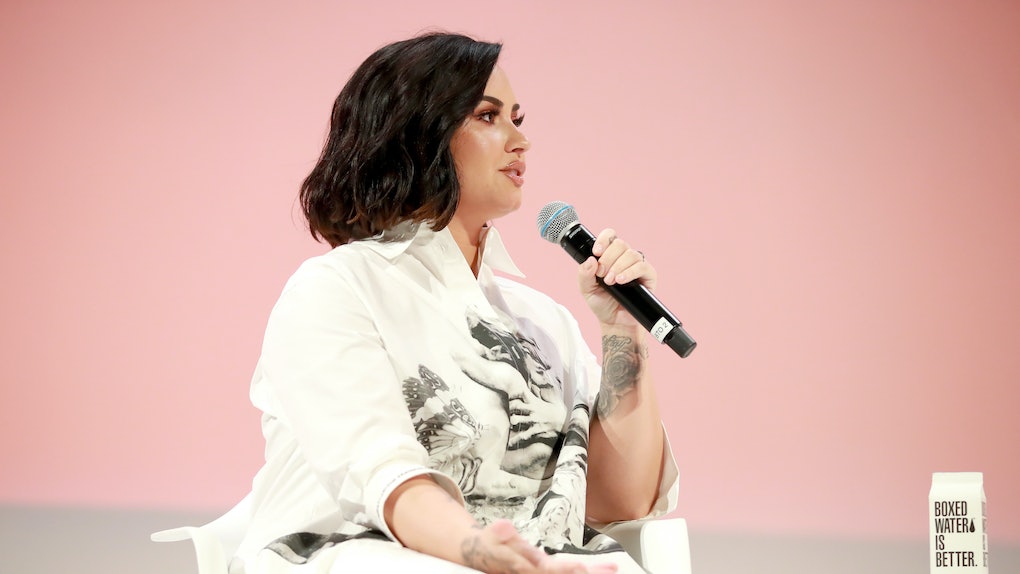 Demi Lovato has always been open with the world about her struggles with addiction, but in her new docuseries Dancing With The Devil, she's letting fans in even more. The series (available to fans starting March 23 on Youtube) largely addresses her 2018 overdose and how she's been doing since, but it also touches on her relationship with ex Max Ehrich. Demi Lovato's quotes about Max Ehrich in Dancing With The Devil shine a light on what was going through her head during the whirlwind romance, and how she felt when it came to an end.

Even though the series has not yet been made public, attendees of the SXSW festival got an early peak on March 15. In the series, viewers watch Lovato run through the gamut of emotions following her split from Ehrich. The two got engaged on July 23, 2020 — four months after PEOPLE confirmed their relationship, and later split up in September 2020.

"I'm really sad that things ended the way that they did," Lovato said in Dancing With The Devil. "The good news is, I haven't picked up any hard drugs or anything like that. I'm hanging in there. It's just sh*tty." Later on, the pop star breaks down and confesses, "I thought this whole time that I didn't miss him. I just miss the person that I started quarantining with. And I don't know how to give my heart to someone after this."

In the docuseries, Lovato goes on to admit she feels like she rushed into a relationship because of internal pressure. "Honestly, what happened? I think I rushed into something that I thought was what I was supposed to do," she said. "I realized as time went on that I didn't actually know the person that I was engaged to."

Quarantining together during the start of the pandemic also did not help. "Of course, that accelerated [the situation]. I didn't even have my best friends to hang out with in quarantine. The hardest part of the breakup was mourning the person I thought he was," Lovato says.

Lovatics may remember how back in September 2020, Ehrich claimed on social media that he found out about his breakup with Lovato "through a tabloid." In October, he was also photographed crying and sulking on the same Malibu beach he proposed on. To that, Lovato said, "I mean, I was just as shocked as the rest of the world at some of the things that were said and done." You can say that again.

As for how she's feeling now? "I feel like I'm actually too queer to marry a man in my life right now," she said. "I'm not willing to put a label on it right this second, and I think I will get there, but there's a lot of things that I have to do for myself first. I want to allow myself the ability to live my life in the most authentic form possible."

Partner or no partner, here's hoping Lovato finds the love she deserves.