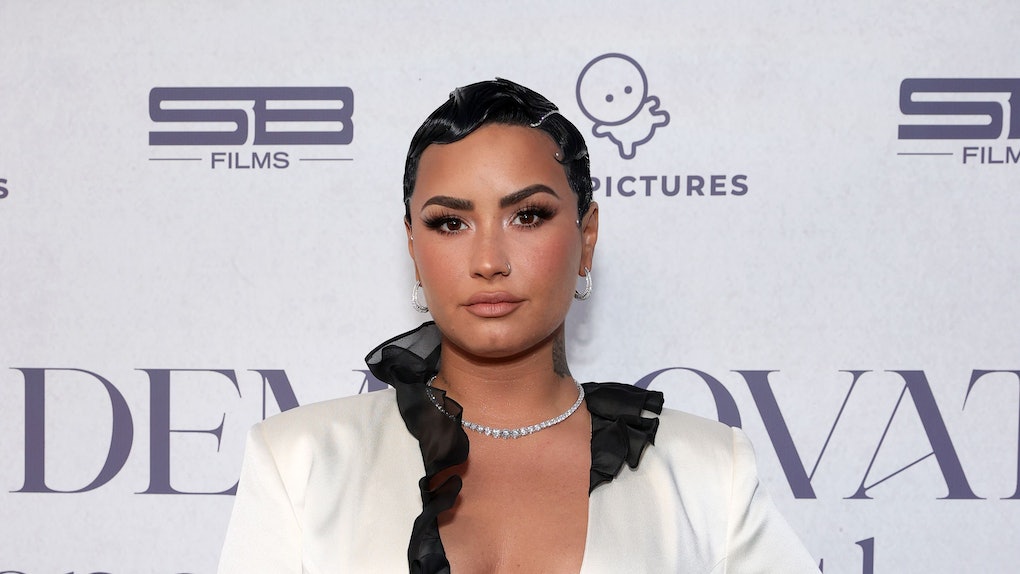 Sorry, don't mind me aggressively smiling. I just adore what Demi Lovato said about falling in love with herself. During a conversation she had with fans at iHeartRadio's Album Release Party for her new LP Dancing with the Devil, per People, Lovato opened up about how writing the new album helped improve her relationship with herself. "What I learned about myself while writing this album is that I'm a catch," she revealed, per People. "I deserve the best kind of love. I hope that everyone that listens to this album can say the same thing for themselves."

She continued, "I realize that I never want to settle for anything less than what makes me feel absolutely amazing. This album helped me fall in love with myself because I've never been able to really feel super confident and stable on my own."

The lesson is a big one for Lovato. She said she's had a hard time enjoying single life in the past. "This is the first time in my life where I am single and alone and I feel happier than ever before, even happier than some relationships I've been in. It's been a really cool process getting to know myself," she shared. "I learned that I'm a catch and I deserve someone great and I'm gonna wait until I find them."

Lovato's period of embracing single life comes after her split from actor Max Ehrich. The two quickly got engaged in July of 2020 after just a few months of dating. They reportedly broke up by that September.

Lovato is pansexual, so she's open to dating people of any gender and sex. In the outro for her new song, "The Kind of Lover I Am," she sings:

That right person is out there — but in the meantime, Lovato has all the love she needs.

More like this
Cardi B's Quote About Recording "Um Yea" With Offset Is Majorly Sexy
By Candice Jalili
Are Demi Lovato & Noah Cyrus Dating? They're Reportedly "Hanging Out"
By Joyann Jeffrey
JoJo Siwa's Quote About Coming Out As Pansexual Is Full Of Joy
By Corinne Sullivan
Stay up to date