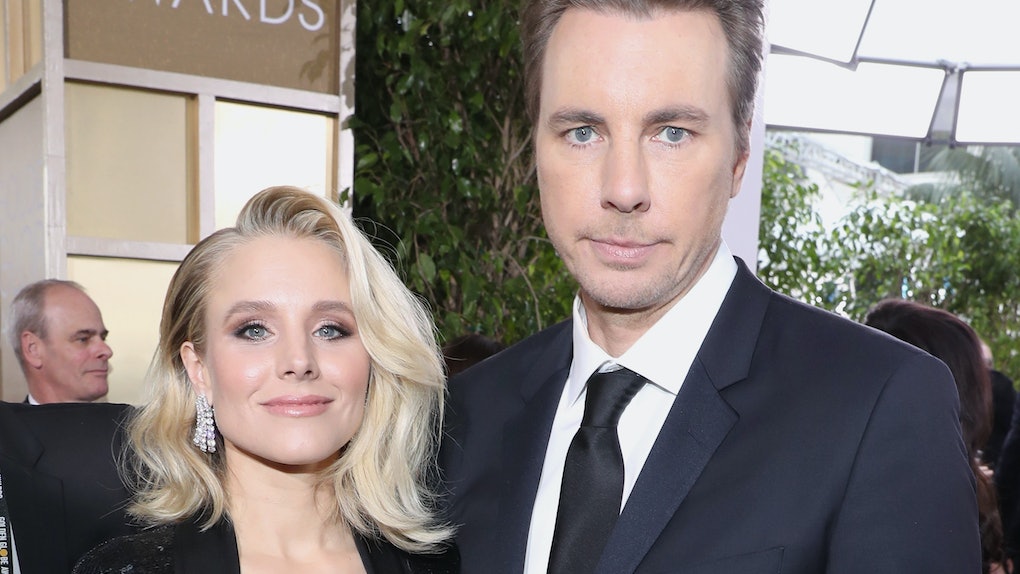 Actor Dax Shepard makes up one half of America's favorite couple (the other half, as you probably know, is actress Kristen Bell). Fans love them because they seem so down-to-earth, so hilarious, and, most importantly, so very, very human. The couple, who has been married for 5 years, can seemingly do no wrong in the public's eyes. And, with the holidays approaching, you might think that their Christmas celebrations are on an enviable level — but Dax Shepard and Kristen Bell's family holiday traditions are (perhaps unsurprisingly) relatable, which is basically just another reason to adore these two A-listers.

With the holidays quickly approaching, I ask Shepard how his family gets in the holiday spirit. "I'm full Clark Griswold," he tells me. "I put up lights on every inch of the house about three weeks ago. I was probably first in the neighborhood to be fully decorated," he says with pride. Considering Christmas Vacation is my all-time favorite holiday movie (because of just how relatable it was in regards to my own family), Shepard's response is yet another display of how "normal" he truly is.

Another holiday tradition Shepard tells me about is reminiscent of the Griswold family, too: yearly Christmas family road trips. "Every other year, we go to Oregon to be at my mom’s house," Dax begins. "Every year we road trip — we don’t fly. And we stop at different places along the route as part of our tradition."

I'm not going to lie. I've had a handful of family road trips, and nearly every one has ended in tears or frustration. Whether it's because we got lost, got on each other's nerves, or were just totally over being in such close quarters for too long, the idea of a holiday road trip is laughable — until I think about what it would be like to adventure in Shepard's car. Suddenly, it doesn't seem too bad at all.

"Last year, we were in Redwood City on the coast in California, and we used it as an excuse to see all the different spots between here and Hood River, Oregon," Dax tells me, and I jokingly mention that driving during the holidays surely beats out flying. "Oh yeah, not our favorite activity with a 5 and 3-year-old," Shepard says.

I don’t think we’re different from anyone else’s families.

I ask him how he and Kristen manage to ensure ample family time during the holiday season, despite the fact that they both juggle an endless amount of projects.

"Luckily, for both of us, the shows we’re both on have nice, long Christmas hiatuses, so it’s not too hard for the holidays," Shepard answers. He reveals that both of their jobs allow them to have flexible schedules, and that they shuffle things around when they need to.

I'd like to say that I beg to differ, but it's very apparent that, despite the fact that this family has two A-list celebrities as parents, they are seemingly as involved in their family as any other average parent is.

One thing that is entirely different, though, is the fact that Shepard has a fairly large platform to help educate his fans. With that kind of spotlight shining on him, he used it to open up about his partnership with Amazon to promote a unique way to donate a toy to Toys for Tots using Alexa.

On Dec. 3, Shepard took to the streets of L.A. to deliver smiles on behalf of Amazon to challenge fans to a series of charitable games, where every point earned meant that Amazon would make a donation to Toys for Tots. It was an untraditional way to make donating around the holidays much simpler (and way more fun).

"The thing that I think is coolest with this partnership is that I really do believe that most people would love to donate something for the holidays to a kid in need," Shepard says, adding that, fortunately, Amazon has found a seamless way to donate a present to a kid in need.

I also learn that charity takes priority in the Shepard-Bell household, and that their two children, 5-year-old Lincoln and 3-year-old Delta, are very familiar with it. But when it comes to being charitable, his wife takes the cake. "I think she gives away at least half of what we make every year to other people," he tells me, which only makes me love Bell even more than I already did (which is a lot).

"We really try to get the kids in the habit of donating our own stuff," he says, then tells me a few of the other charities he and his family have worked with in the past.

"We work with Baby to Baby, which is a great charity — they give baby supplies to children in need — and we also work with PATH, which finds housing for homeless families."

Our kids come with us and help with the moving and, you know, we assemble all the different things people would need for a new apartment. So our kids have been a part of that, and I think we’re not necessarily preaching to them, but just making it part of our everyday life is the approach we’re taking.

A damn good approach, if I do say so myself.

On the topic of his personal life, I tell Shepard that his fans always appreciate his openness about his marriage with Bell. I wondered: Is there anything that their fans might be surprised to learn about the couple? Apparently not.

"I can't imagine at this point that there [isn't] anything a fan wouldn’t know about me after 70 episodes of Armchair Expert at two hours a piece," he tells me with a laugh. "I imagine our fans should have a pretty comprehensive idea of what’s happening at our house," he adds.

I press further. Is there really nothing left to learn? "Honestly, I can’t think of something that would be revealing at this point, especially when Kristen's been on the podcast, and kind of almost every topic ends up coming up," he says. And it's true. (If you've yet to listen to Armchair Expert, this is the time to start.)

So whether you choose to believe him or not, you have to hand it to Dax Shepard and Kristen Bell. Somehow, they've managed to capture our hearts by simply showing the world how surprisingly normal they are.

Now if you'll excuse me, the holidays are coming, and much like Dax, I've got to go get my Griswold on.