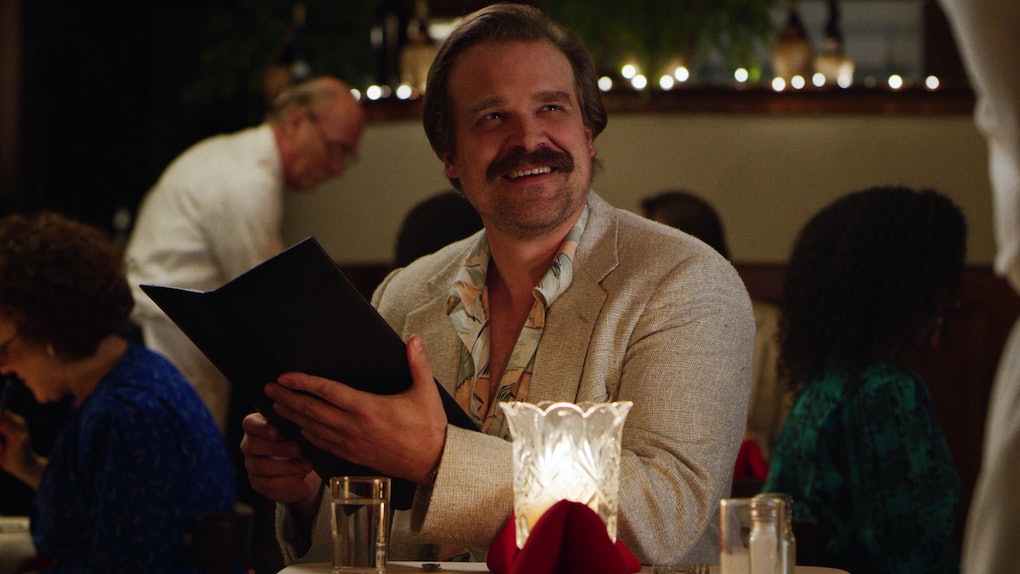 The third season of Stranger Things only came out a few days ago, but of course, many fans have already binged the entire season and have been hit with the emotional wallop of that season finale. Spoiler alert: This post contains spoilers from the finale of Stranger Things 3. After finishing the new season, every fan is asking the same question: is Hopper really dead or not? Well, the man who played Hawkins' police chief is now weighing in on Hopper's fate, and David Harbour's quotes about Stranger Things 3 seem to confirm a popular fan theory that Hopper secretly survived that explosion.

In the final moments of Season 3, Joyce Byers is forced to detonate the Russian laser keeping the inter-dimensional gate open while Hopper is stuck standing right next to it. The act wound up destroying the Mind Flayer and saving Hawkins, but also presumably killing Hopper, as Joyce, Eleven, and everyone else have to move on without him in the following months.

But a number of fans have pointed out there is a definite possibility Hopper is still alive. After all, we never saw his body in the lab after the explosion, plus the gate to the Upside Down was still open before Joyce detonated the laser. And most telling of all is the mid-credits scene in the season finale, in which a Russian guard confirms that they are holding "an American" in one of their cells.

All of these details have come together to form a fan theory that Hopper is alive in that Russian prison cell, having escaped the explosion by jumping into the Upside Down and finding an exit from the other dimension that led to the Russian lab.

In a new interview with /Film, David Harbour basically confirmed this theory, telling the interviewer that Hopper being the American locked up in Russia is the most likely scenario, and also pointing out how the Russian mercenary hunting Hopper down all season referred to him as "the American," just like these guards. Harbour went on to talk about what he thinks lies ahead for Hopper, which seems to be even more confirmation that the police chief is alive.

I think the tapestry of Hopper is so large and interesting, and I also think that Hopper has karmic debts to pay for how dead he’s been for a long time. We have to decide who this man is…Is he a man of justice? Is he a father? Which one is he? And I think those two things are not always compatible. I don’t know that you can stand for values or stand for relationships at the same time. At some point, you’re going to have to choose. So I’m interested in that — in him as a human being, if he’s faced with that choice, what he would choose?

While all of this definitely makes it sounds like Hopper must be the American in the cell, Stranger Things fans know that we can never fully count out a shocking twist. Some fans think the mid-credits scene was actually about Dr. Brenner, or maybe the Duffer Brothers have an even more unexpected twist in store. We will have to wait to see to know for sure.