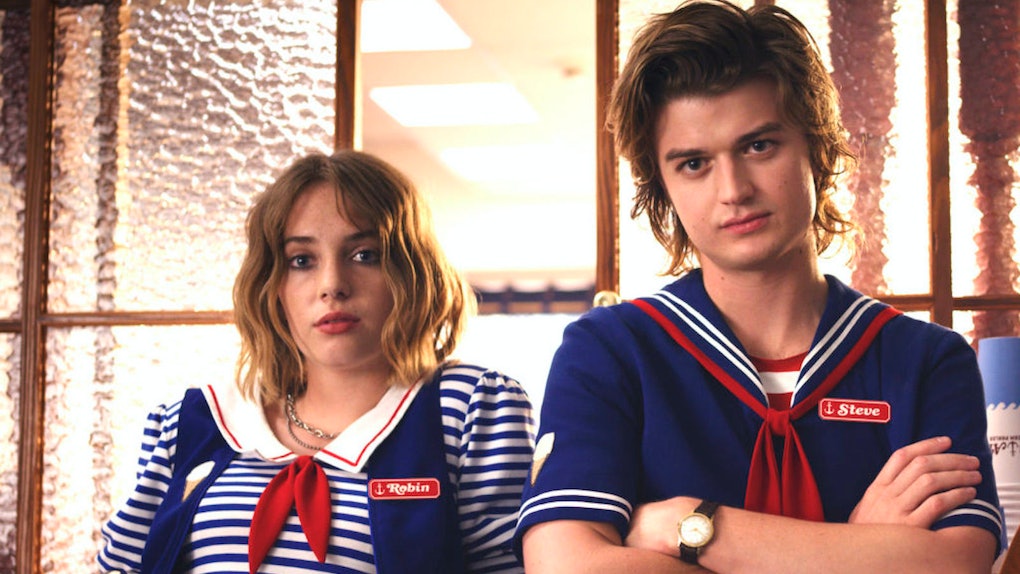 The third season of Stranger Things was teased as a summer of love before it was released, and although some inter-dimensional monsters and covert Russian spies tried to interrupt things, it definitely delivered on that romantic promise. Mike and Eleven can't stay away from each other, Lucas and Max are the groups designated relationship experts, and Dustin found love after meeting Suzie at camp. But one of the most important love stories of the season was between Steve and his co-worker Robin. Although Steve and Robin's relationship in Stranger Things swerved away from a romantic connection in the end, it did something even rarer for a television series by underlining the importance of platonic love.

Spoiler alert: This post contains spoilers from throughout the third season of Stranger Things. Steve Harrington may have started out the series as the douchey school bully, but he turned over a whole new leaf in Season 2 after developing a caring connection with Dustin and his friends. So in Season 3, Steve has firmly cemented himself as one of the most fan beloved characters on Stranger Things. It makes sense that fans would want Steve to be happy, and early on in the new season, it feels pretty clear that the show is building to a romantic connection between Steve and his Scoops Ahoy co-worker Robin.

But at the end of the season, when Steve finally confesses his romantic feelings for Robin, she comes out to him as gay. Steve takes a minute for the revelation to sink in, but then he keeps the conversation going, joking around with Robin as has been doing all summer. It was a response that let Robin know Steve would not view her any differently after her coming out.

However, some fans who were invested in Steve and Robin's possible romance were upset by the scene. Some fans tweeted their hopes that Robin is bisexual rather than a lesbian so there could still be hope for a romantic relationship with Steve, and a viral Reddit post listed Robin coming out to Steve as one of the heartbreaking, bad things that has happened to Steve throughout the show's run.

The problem with these interpretations of Robin's coming out scene is that they place an all-consuming importance on romantic love. At the core of these lamentations over Steve "not getting the girl" is the toxic belief that romantic relationships are the only ones that are of any value. In truth, Steve actually does end up with Robin, forming a lifelong friendship that is deeper than any of the relationships Steve has had with anyone. Just because Steve and Robin are not hooking up does not detract from the love they have for one another, and just because their love ended up being platonic does not mean that their story is not a love story.

At the end of the season, Robin helps Steve get a job with her at the video store, and it becomes clear that the two will be sticking together for the long haul. And that is the true love story of Stranger Things Season 3.