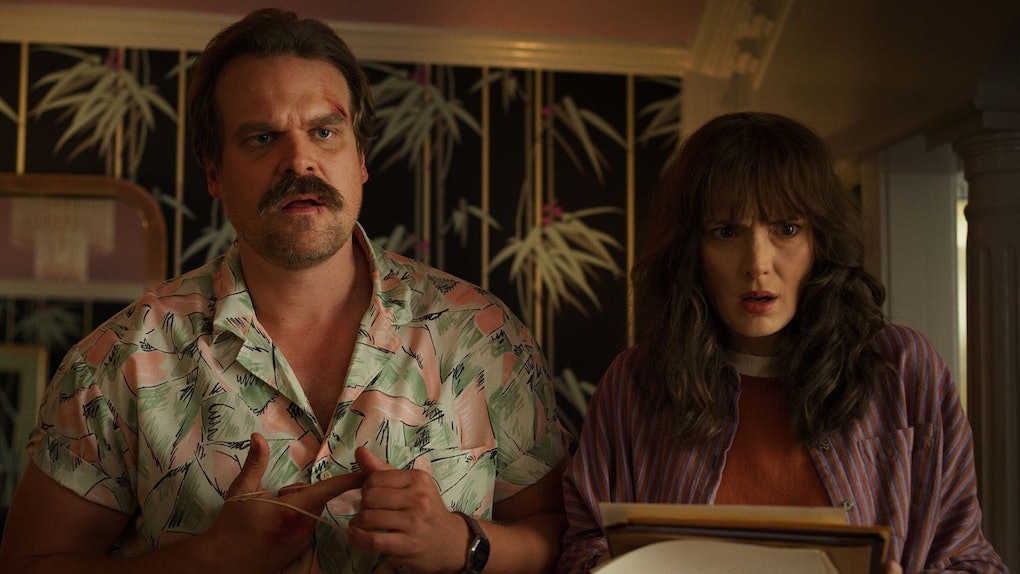 The latest season of Stranger Things introduced a ton of new twists, characters, and threats into the show's sci-fi universe, but the final moment left every viewer asking the same question. Spoiler alert: This post contains spoilers from the Stranger Things Season 3 finale. In the climactic moment of the new season, Joyce Byers believes that she has killed Jim Hopper by detonating the Russian gate-opening machine right next to him, but fans picked up on some clues that suggest that Hopper may actually have survived the explosion. So, is Hopper alive in Stranger Things or not? Let's get into all the theories about what may have happened to Hawkins' heroic police chief.

The big sign to fans that Jim Hopper is secretly alive after that Season 3 finale is that we never actually saw his body after the explosion. Joyce looks back into the lab room after detonating the machine but there is no sign of Hopper at all. Then, in the mid-credits scene of the season finale, we see a pair of Russian guards feed a prisoner to a captive Demogorgon. But the line that stood out most of all from that scene is one guard telling the other not to sacrifice "the American" in one of their cells.

Of course, this quick line immediately gave fans hope that Jim Hopper was actually alive somehow and had been captured by the Russian operatives. But how could he have possibly survived the explosion and gotten all the way to Russia? Well, fans have a pretty good theory about that, too.

The gate to the Upside Down was still slightly open right before Joyce blew up the machine, and we even see Hopper glance at the gate quickly before giving Joyce the grim go-ahead to detonate. It definitely looks like Hopper jumped into the Upside Down at the very last minute to save his life, and that he may have found an exit inside the Russian base months later, where he was promptly arrested. This theory also gives new meaning and importance to Hopper's emotional final words to Eleven, pleading for her to keep the door open three inches. If Hopper managed to escape through the narrow opening into the Upside Down, the line also carries an unintended second message to partially reopen the gate to let Hopper back out again.

While most fans seem to be in agreement over Hopper escaping into the Upside Down, there is another popular theory that Hopper is actually not the American trapped in the Russian cell. A viral Reddit post reasons that the person being held in Russia is actually Dr. Brenner. Season 2 confirmed that Brenner was still alive, but Eleven never searched for his location, so we have no idea where he could be. Plus, Brenner being held captive in Russia would explain how the Russians were able to build their gate-opening machine in the first place, and his expertise on the Upside Down would explain why the guards refuse to kill him like the other prisoners.

The upsetting part about this theory is that it means Hopper is left wandering the Upside Down for months on end, it seems. We will have to wait to see if a potential fourth season of Stranger Things finally reveals what actually happened to Hopper.