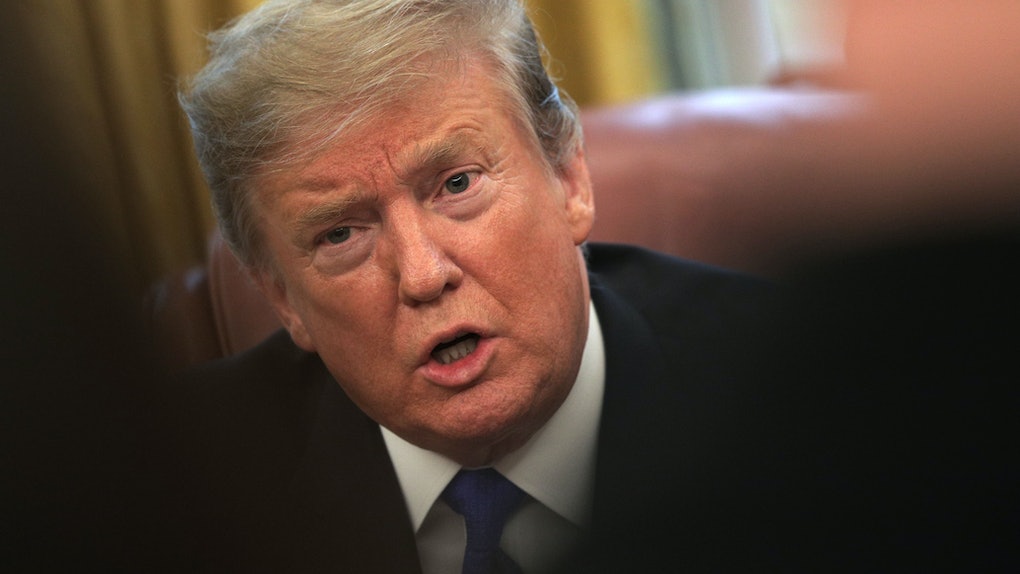 Could Donald Trump Be Impeached For Sexual Misconduct Allegations? It's Tricky

News broke on Monday, Feb. 25 that President Donald Trump has been accused of kissing yet another woman without her consent. Elite Daily reached out to the White House for comment at the time but did not hear back. The accusation adds to a growing list of names that have made similar claims against the former reality TV star and real estate mogul, all of which he has denied. Though the previous accusations concerned incidents that mostly took place several years ago, Monday's news concerned a more recent incident that happened while Trump was actually campaigning for president. With this latest allegation, people may again be wondering whether Trump can be impeached for sexual misconduct.

The latest allegation came in the form of a lawsuit filed by a woman named Alva Johnson, a black woman from Alabama who worked on Trump's 2016 campaign. She alleged, via a story in The Washington Post as well as the lawsuit filed on Feb. 25, that Trump grabbed her arm and forcibly kissed her without her consent while in Florida for a small rally. In a statement, the White House called Johnson's allegation "absurd on its face." The White House did not respond to Elite Daily's request for further comment. It's not the first time that Trump has been accused of sexual misconduct, either — more than a dozen other women have accused the now-president of sexual misbehavior over the years, with allegations ranging from harassment to assault. The official White House position is that all the president's accusers are lying, and the White House did not respond to Elite Daily's request for additional comment.

While the allegations are undoubtedly disturbing, it's unclear whether Trump would be impeachable for this alleged behavior in part because there are no cut-and-dry criteria for impeaching someone. A president or other official can be impeached for treason, bribery, or other "high crimes or misdemeanors," but the real grounds are that he or she is causing harm to society. The House of Representatives has the discretion to decide if they believe an official's conduct raises serious enough concerns that they should be investigated and possibly removed from office. As of March 2019, Congress has not made any serious moves towards impeaching the president.

Impeachment expert and legal scholar Barbara Radnofsky, author of A Citizen's Guide To Impeachment, tells Elite Daily by email that it's unlikely that sexual misconduct allegations alone would do it. "While [alleged sexual misconduct is] technically impeachable and reprehensible, I think there are many additional different grounds and it won't happen with all resting in his [alleged] sexual misconduct," she says. (Radnofsky is not involved in any legal proceedings against the president.) "Congress would never limit the Trump impeachment articles to sexual misconduct, although his [alleged] serious assaults described by many women may make their way into a specifically larger Article or part of an all encompassing 'omnibus' article," she says.

What's more likely is that Trump would be impeached for alleged misconduct that helped him get to office. The president's former personal lawyer and fixer, Michael Cohen, was on Capitol Hill in late February 2019 for a three-day testimony marathon beginning Feb. 26, where he testified to Trump's alleged role in making campaign finance violations, particularly regarding a payoff to keep silent two women who'd alleged having affairs with Trump years earlier. Trump acknowledged reimbursing Cohen for the payments, but has repeatedly denied that the affairs ever took place.

As NBC News' Danny Cevallos wrote back in December 2017, it's unlikely that conduct that is merely deemed socially wrong but has nothing to do with political power would rise to the standard for impeachment, nor has any official ever been impeached on the grounds of such behavior before. (Though President Bill Clinton's impeachment trial did concern an alleged sexual relationship with an intern, the grounds of impeachment were for lying and obstructing justice. He was later acquitted.)

So whether we see misconduct come up in any potential future impeachment cases, it'll probably only be in the form of a mention without a larger case that gets more at the heart of a political wrongdoing by the president — if that's what ends up being proven. That alone is a big "if."