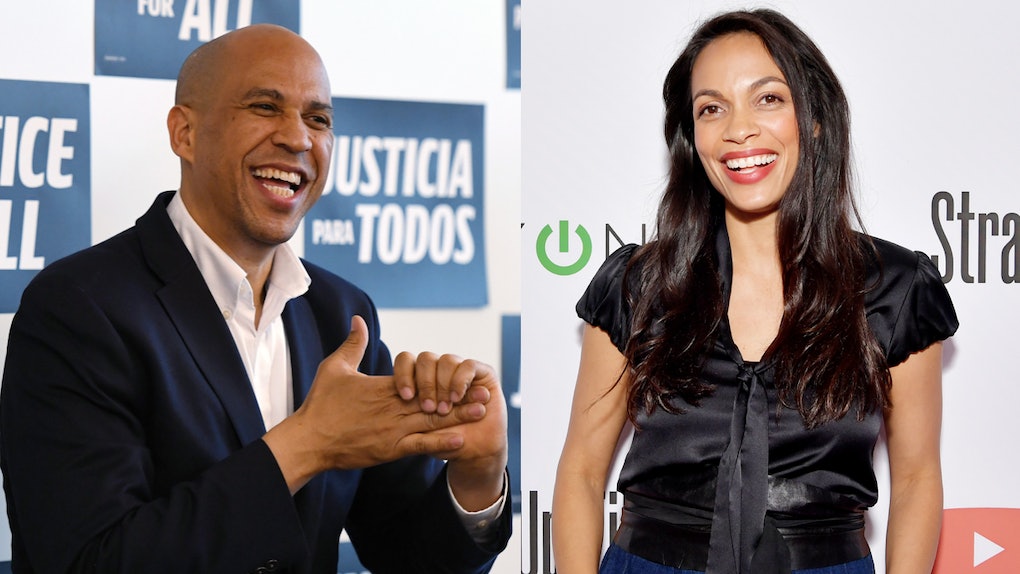 2020 presidential hopeful Sen. Cory Booker and actress and activist Rosario Dawson were first rumored to be romantically linked in January 2019, when they were spotted together at the Broadway show Dear Evan Hansen. Within a couple of months, both had verbally confirmed their relationship on separate occasions and said some pretty cute things about each other. Cory Booker's quote about marrying Rosario Dawson during an appearance on RuPaul's new self-titled talk show on June 12 may have hinted at just how serious these two are.

On the show, RuPaul pointed out that if Booker were to be elected President in 2020, he would be the first unmarried president in a "long, long time," and Booker had a quick (and possibly foreshadowing) response. "Well the swearing-in isn't until the 21st of January 2021," he said. "You never know what might happen between now and then." His response prompted RuPaul to quickly touch on Booker's relationship with "someone very famous," to which Booker added, "somebody very special," who just so happened to be in the audience. This marked the first time Booker and Dawson appeared in public together.

Booker also talked about the beginning of his relationship with Dawson. "We actually first met at [a party for] a friend of ours running for governor of Maryland, Ben Jealous is his name, former head of the NAACP," he said. "We met at that party, and she didn't give me the time of day. She did me serious shade! And then we met at another friend's party, both of us were single at the time. It was a roof party of a dear friend, and I had the courage to walk up to her and ask for her phone number." Booker even revealed to RuPaul that he occasionally writes poetry for his girlfriend, PEOPLE reported.

In March, Dawson confirmed her relationship with Booker after she was approached by TMZ while walking through Reagan National Airport in Washington D.C. "So far so wonderful," she told the publication. "He's a wonderful human being. It's good to spend some time together when we can… I am just grateful to be with someone that I respect and love and admire so much who is so brilliant, and kind, and caring, and loving."

Dawson may not have said anything about an impending engagement, but Booker joked about the possibility during an appearance on Ellen in March, when she prompted him to have a White House wedding. "So you're saying if Rosario and I get there, wait, don't do the marriage before?" he asked the talk show host. After Ellen said yes, he laughingly added, "Would you help preside over the wedding?"

During that same appearance on Ellen, Booker gushed about Dawson some more, and it was absolutely precious. "She's a deeply soulful person and has taught me a lot of lessons about love already," he started. "Sometimes you show the greatest strength when you make yourself vulnerable. She really has this nurturing spirit that has made me more courageous, not just in the love that I project and want to see in our country, but I think even in our personal relationships — to love more fearlessly," he continued. "I'm really really blessed to be with somebody who makes me a better person. She's just an incredible human being."

While there may not be wedding bells ringing for Dawson and Booker just yet, neither one of them is entirely shutting down the possibility of it some time in the near future. For now, only time will tell. Now, excuse me as I continue to obsess over these two.