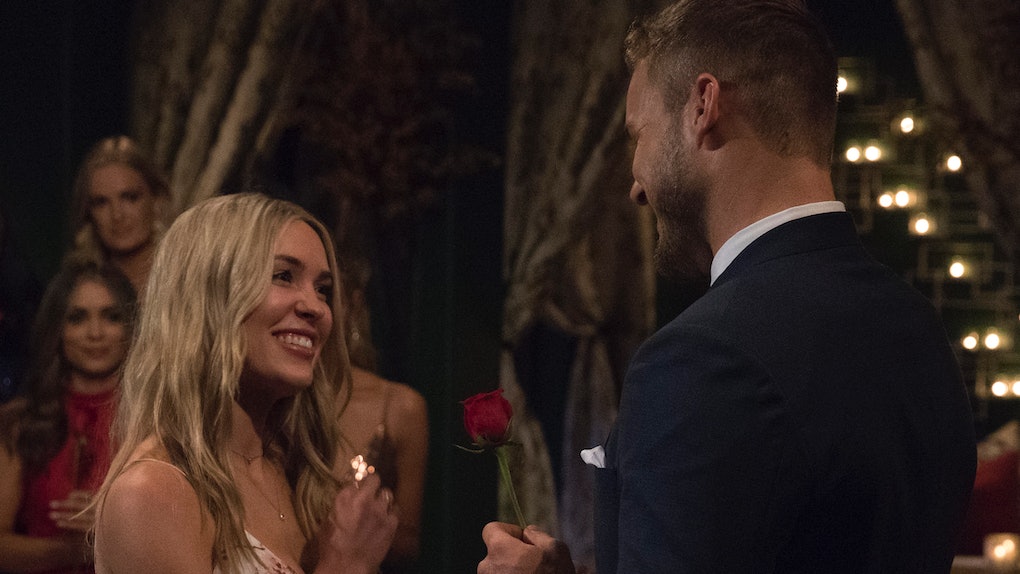 Colton & Cassie's Last Conversation On 'The Bachelor' Was An Emotional Rollercoaster

If there's one lesson that last year's Bachelor Arie Luyendyk Jr. has left with the franchise, it's that all final decisions aren't really final. The race car driver made headlines for breaking up with his Final Rose pick and pursuing the runner-up, and current lead Colton Underwood took a page out of Arie's book when he decided to arrive at contestant Cassie's home and profess his love for her. Apparently anything goes in Bachelor Nation nowadays, but Colton and Cassie's last conversation on The Bachelor was definitely different.

ICYMI (and where were you if you did?), Cassie's doubts about having a serious relationship with Colton escalated when she learned the day of their fantasy suite date that Colton never received a blessing from her father Matt during her hometown date. Despite preaching the importance of earning all of the dads' blessings, Colton wasn't discouraged by the lack of Matt's approval. On the other hand, Cassie was super bothered by how blasé Colton seemed, and her uncertainty about the entire scenario surged when her dad surprised her at her hotel room in Portugal.

Delivering the same real talk he won over Bachelor Nation with during hometowns, Matt reminded Cassie that she shouldn't feel so hesitant about the possibility of getting engaged. Not wanting to pressure her into any particular decision, Matt encouraged his daughter to just be honest about her feelings with Colton. This led to Cassie hemming and hawing about her truth with Colton before finally revealing that she was leaving the competition.

Colton told Cassie that she was the one and that they could continue their relationship through dating rather than an engagement. Cassie was unsure whether she'd ever reach the level of love and commitment Colton had seemingly already achieved. She stuck to her decision to leave, prompting Colton to ditch cameras and lunge himself over a fence.

Still emotionally reeling from the goodbye, Colton essentially called off the rest of the competition. Feeling like he wasn't enough after Cassie's goodbye, he told Chris Harrison and producers that he was done with the show. He parted ways with remaining contestants Tayshia and Hannah G., who were both falling in love with him, after telling them he loved Cassie. But after touching base with Harrison, Colton decided to channel his inner When Harry Met Sally... and tell the girl how he really felt. He still believed Cassie loved him, so he resolved to keep fighting for her regardless of Harrison's reminder that Cassie possibly wasn't into him.

Of course, this reconciliation didn't involve a 1980s perm, Billy Crystal, or the romance of New Year's Eve, but I guess the sentiment was still there.

Part 2 of the Bachelor finale picked up with Colton arriving at Cassie's hotel room to fully explain how he felt about her. He stunned her with the news that he broke up with the other women and, as he put it, asked for "a second chance, to take it day by day, and figure it out."

Meanwhile, Cassie opened up about believing that the other women were more ready for what Colton wanted. She was still struggling with knowing how she felt, but she wanted Colton to have that certainty and not resent her for being unsure. Colton insisted he was OK with it and that he wanted to "show" her he loved her rather than "tell" her.

He offered to take her to where his family was waiting for them in Spain (the final two contestants normally meet the lead's parents in other seasons) and take things from there. Cassie agreed, saying, "I guess I'll figure things out as I go."

So, is this a happily ever after for Cassie and Colton? Something doesn't bode well about being taken to see your pseudo boyfriend's family after you already rejected him once. But as the show soon displayed, the magic of Spain apparently helped move things along for them. They cozied up to each other on their last date and then an overnight date before debuting as a couple on "After the Final Rose." These lovebirds ended the Bachelor journey on a happy note — who knew?

Season 15 of The Bachelorette premieres in May on ABC.