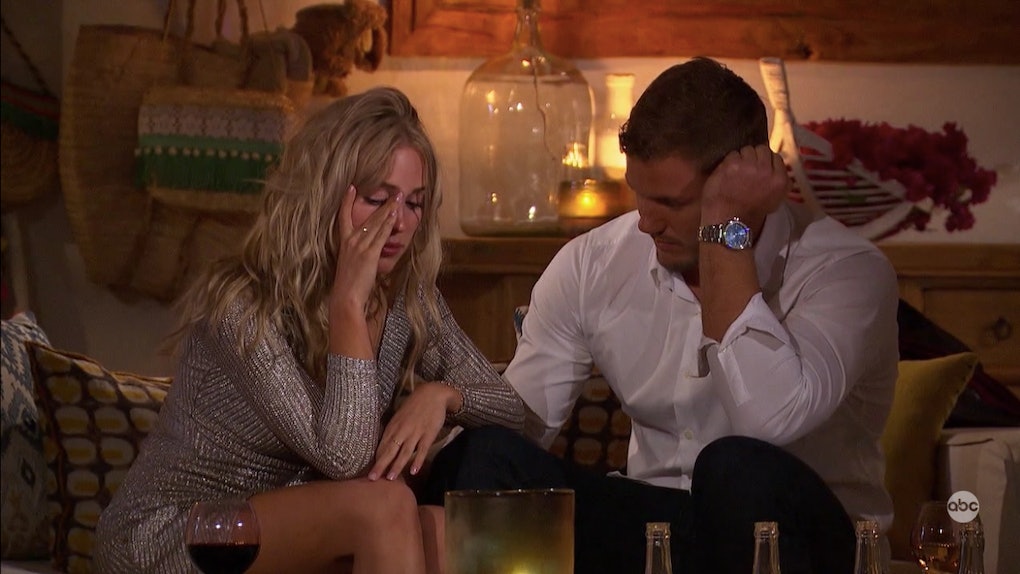 Colton & Cassie’s Body Language During Their Breakup Was Super Emotional

It's been a rough season of The Bachelor for Colton Underwood. From dealing with plenty of drama to saying goodbye to some really top contenders, Underwood has gone through a lot in a very short amount of time. All of that came to a head on Monday night's episode, when the highly-anticipated fence jump finally happened. Turns out, Underwood jumped the infamous fence after getting dumped by his front-runner, and the fence jump went from being funny to honestly kind of heartbreaking. Now, looking at Colton and Cassie’s body language during their breakup, it's clear that the emotions were real, and Underwood's reaction is totally understandable.

If you missed Monday's episode, then there's a lot to catch up on. As you'll recall, Cassie's dad did not give Underwood his blessing when he asked for it at her hometown. It was understandable, but then, Cassie's father literally came to Portugal on Monday night's fantasy suite episode, and told his daughter that he wasn't sure she should be with Underwood. After that, Cassie ended things with Underwood in a very emotional conversation, telling him that she loved him, but she wasn't in love with him — an important distinction. So, what do two body language experts say about the couples' body language as they ended things? Spoiler alert: It's sooooo much.

1. It was an intense situation.

While Underwood and Cassie discuss the possibility of a future together, it's clear that they're both reeling. "We see a defeated posture in both of them in this photo," body language expert Lisa Mitchell tells Elite Daily. "Folded in on themselves, slumped over, leaning on their arms... all of this is classic defeat body language. The space between them also indicates that their guards are up and that they are being intentional about not being too close during this conversation signaling discomfort."

Understandably, Underwood was definitely caught off-guard by what happened.

It was a difficult conversation, as both Cassie and Underwood had such strong feelings for one another. "During this especially intense emotional moment, Colton finally stops leaning on his hand and uses it to cover Cassie's, a show of support to her and she is clearly struggling to contain her emotions," Mitchell says. "She's using her hand to block her face from the camera and is folded in on herself which shows that she feels vulnerable in that moment."

Sometimes, strong feelings aren't enough, which is what Cassie was telling Underwood in this moment.

3. With so much hurt, they tried to create distance between themselves.

This is a super raw moment, and their body language makes that clear. "There is a lot of blocking behavior in this picture," Mitchell explains. "Cassie is holding her hand up and touching her face to cover the expression of sadness that she has on her face. She's still leaning on Colton, but she's facing more straight ahead than toward him to show she's distancing herself from the source of her discomfort. Colton puts his head down in defeat and uses his hand to support his head and try to soothe himself during this emotional exchange. He is also using his hand to shield himself from the full view of the intrusive camera during this moment."

Additionally, their body language shows that neither one of them is too happy about what's happening. "Here she doesn't want to see the situation, that's why she's covering her eyes and face but she's also touching her forehead which people do when they're thinking about something," body language expert Traci Brown tells Elite Daily. "And he's looking down. Nobody looks down when they feel great."

While Underwood was definitely hurting, he still tried to hold himself together. "Cassie is leaning into Colton as if looking for support," Mitchell says. "He's keeping his torso facing straight as opposed to turning toward her or offering her additional comfort, choosing to keep his hand up protectively and leaning his head on it instead of wrapping his arm around her. His guard is up and he's creating some space knowing that he's receiving bad news."

Additionally, it also can be seen that Cassie is retracting from the situation. "We have tears that speak for themselves," Brown notes. "But notice how he's reaching for her and she's not reaching into his space. She's more focused on herself here."

As they hugged, things were still tense. "Although they are embracing each other, their posture is pretty telling," Mitchell says. "Normally when Colton gives her a hug, he really leans in and closes the space between them, but in this case, he's staying pretty upright with his posture and barely bending his head down. The warmth is gone in this hug, it reads more obligatory than genuine."

Brown agrees. "This doesn't look like an intimate hug," she adds. "It looks more like trying to hold on to each other. And see how he's kissing the top of her head? That's more of a protective gesture than romance." At this point, it was over.

6. As she said goodbye, things were tense.

Finally, as Cassie said goodbye, Underwood was visibly tense. "Colton's mouth is showing anger in this picture," Mitchell says. "His lips are pursed tightly indicating that he's mad that she's leaving, or maybe more so that things aren't working out the way he hoped as this appears as she's telling him she's not in love with him like she wanted to be. He is staying pretty upright, not really bending to meet her upturned look or show her comfort during this difficult part of the conversation."

Obviously, what happened on Monday night's episode wasn't easy for anyone involved. When Underwood jumped the fence, it became obvious that this breakup really impacted him deeply. Hopefully, all will still end well for Underwood and he'll find happiness, whether it's with Cassie, Tayshia, or Hannah G.