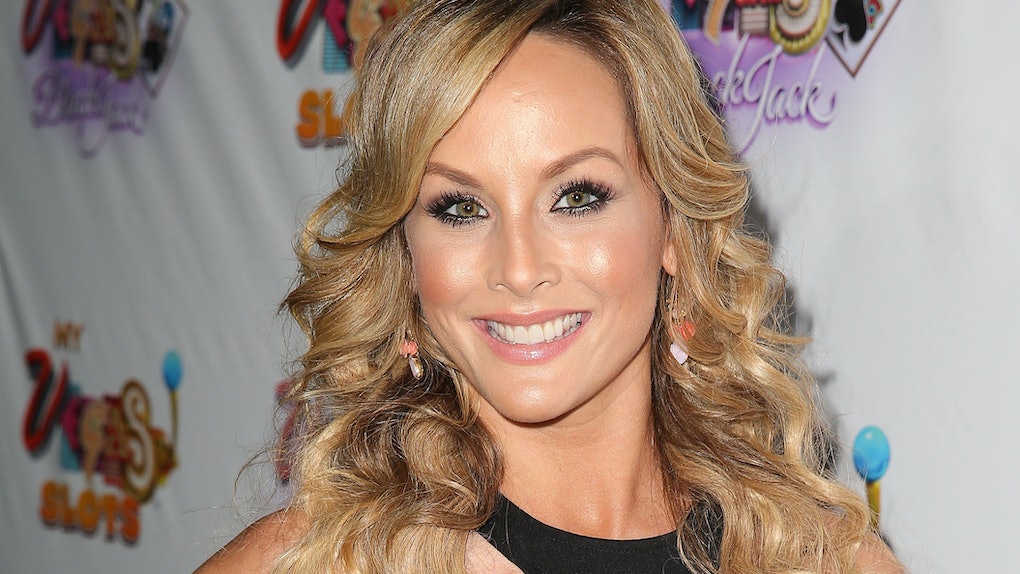 It took a week, but the Season 16 Bachelorette finally responded that bizarre group date from Oct. 20. Clare Crawley's tweet about the strip dodgeball Bachelorette date proved she's not here for double standards, and TBH, she made a good point. On Oct. 26, Crawley took to Twitter to respond to a tweet criticizing the date, which required the losing team to remove one item of clothing each round until one team ended up totally stripped. "It's awful you had the guys take off their clothes," one critic tweeted. "If The Bachelor asked the women do the same things all heck would break loose. You were wrong. Juan Pablo should have had you strip."

Crawley replied to the tweet with a pic of Season 18 Bachelor Juan Pablo Galavis in the buff — save for a strategically-placed sign — along with Crawley's former fellow contestants Andi Dorfman and Lucy Aragon, who are nearly naked themselves. The pic was snapped during a risqué dog adoption photoshoot group date, which (like the strip dodgeball date) took place during the season's second week. "You mean like this?" Crawley tweeted alongside the pic. If you're a Bachelor fan, then you know that wasn't the first time women were asked to take off their clothes during a date, either.

Though she seemingly stood by the controversial group date, Crawley also reportedly liked a tweet suggesting the date was production's idea, not hers, per Page Six. "Hmmmm it's almost like making contestants take their clothes off is a really tired production trick and wasn't your idea at all," the tweet read.

It's still unclear whether Crawley will depart her season early for frontrunner Dale Moss (as she's rumored to do), but it's pretty clear to me she's not going to stand for unfair criticism. As Crawley pointed out, her scintillating date wasn't the first time contestants stripped down, and (unfortunately) it probably won't be the last.

More like this
Zac Clark's Quote About His Relationship With Tayshia Adams Post-'Bachelorette' Is Honest
By Corinne Sullivan
Dale Moss' Instagram With Clare Crawley Suggests They're Back Together
By Corinne Sullivan
Did Bennett Jordan Send Kelley Flanagan Flowers? Here's Why Fans Think So
By Candice Jalili
Stay up to date