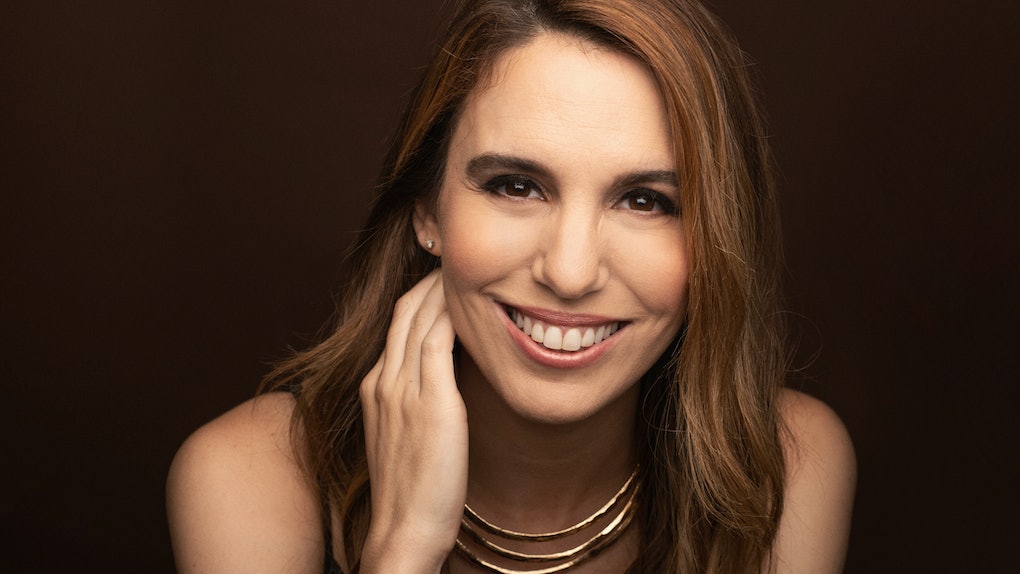 They say you shouldn't meet your heroes, but I don't believe that after ending my conversation with Christy Carlson Romano. If you're anything like me, the Disney Channel all star was a key fixture in your childhood, thanks to her roles as overachiever Ren Stevens on Even Stevens and the titular crime-fighting teen on the animated hit Kim Possible. I looked up to Romano because of her unapologetically bold characters, and speaking with her showed me just how right I was to look up to her all those years. Christy Carlson Romano's quotes about Kim Possible are sure to inspire you as much as they inspired me.

It's hard to separate Romano from the characters she played as a teen, mostly because all of them are so fearlessly confident in who they are. Kim is a super competent action heroine. Ren is an intelligent, confident, straight-A student. Romano's character Jennifer from the Disney Channel Original Movie Cadet Kelly is fiercely focused in defending her sense of justice.

I was very blessed to be the voice of a movement in Disney Channel's history.

Romano feels like there was a clear synergy between all her characters. "I think that because all those characters are all so strong and positive," she tells Elite Daily, "I think that’s why people kind of saw me as one big Kim-Ren-Romano hyphenate. And I think that had I played three very different characters, maybe people wouldn’t associate my voice as Kim Possible so much. But I think that I was very blessed to be the voice of a movement in Disney Channel’s history."

Romano's DNA is especially baked into everything about Kim Possible. Every KP detail has a little touch of Romano herself, from the way that Kim talks to her crush (which was based on Romano's own nerves around boys) to the store where Kim works (Kim's Club Banana is an amalgamation of Romano's favorite stores Club Monaco and Banana Republic). Even Kim's most famous catchphrase came straight from Romano herself. The writers asked her what would be a cool way for the character to ask what's up, and Romano replied with what would become one the most iconic questions ever asked: "What's the sitch?"

This February, KP is getting the live-action treatment for the first time in the Disney Channel Original Movie titled Kim Possible, which premieres Feb. 15 at 8 P.M. ET. After years and years of playing the character, Romano feels like she "merged with Kim Possible over time," and so it made perfect sense for her to join the the new movie in a special cameo that's much more than a simple quick appearance. Romano's character is the "larger than life" Poppy Blu, a pop star who swoops in with transportation to help Kim save the day in a moment of need.

It's been 11 years since Kim Possible was on TV, but Romano believes that she couldn't be more relevant or necessary than she is right now. "I think we need Kim Possible right now," she explains. "I think that there’s a lot of confusion about what women’s empowerment can be and I think that Kim Possible didn’t ever have to apologize."

Kim Possible is coming to a new generation with a new young actress named Sadie Stanley stepping into KP's shoes. Romano sees the new iteration of her iconic character as an important part of the KP tradition. "What would Kim Possible be if it wasn't about sisterhood?" she asks.

Romano tells me, "KP is bigger than who plays her. KP is about women's empowerment, girl power, and and it’s a really important conversation that KP initiates."

Beyond Kim Possible, Romano is keeping that message of girl power alive in many ways. In the last year, she filmed three movies, including two female-focused thrillers, back-to-back. That was all while traveling with her husband and baby daughter Izzy – and expecting her second baby, who's due at the end of February. Romano's also been spending a lot of time connecting with her fans on social media. In addition to her Facebook and Twitter pages, Romano regularly updates her lifestyle blog with tons of recipes, self-care tips, and more. Her Instagram is not only a great place to find Romano's latest videos and other posts, but it's also a treasure trove of throwback Disney pics.

Romano is also hopeful that Disney will bring back her new Kim Possible character Poppy Blu in some form. She says, "I think that she could be a really a really awesome villain." But in the meantime, Romano is especially excited to see a new generation embrace KP.

She's seen it firsthand with her own daughter Izzy dancing to the theme song and playing with Kim Possible memorabilia. And she's very excited to see KP's brand of girl power inspire today's girls. She tells me, "I can’t wait to see little girls dress up as Kim Possible next Halloween."

More like this
The 'Glee' Cast's Tribute To Naya Rivera At The 2021 GLAAD Media Awards Was So Moving
By Abby Monteil
17 Tweets About Simu Liu In The 'Shang-Chi' Teaser, From Proud 'Kim's Convenience' Fans
By Dylan Kickham
This Video Of Disneyland's Marvel's Avengers Campus Is Super
By Cianna Garrison
Stay up to date