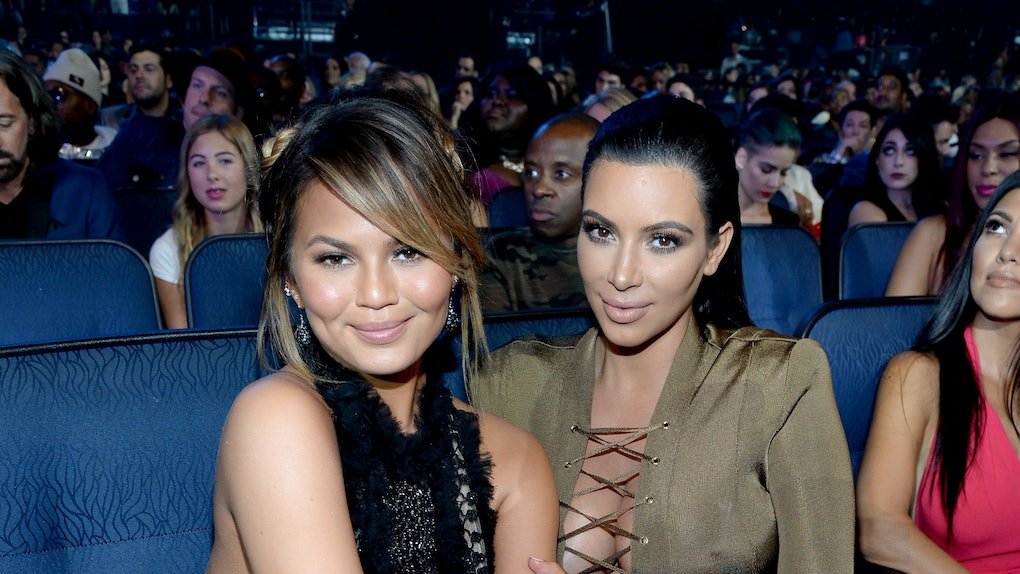 Chrissy Teigen has Kim Kardashian's back all the way throughout her divorce from Kanye West. After a tumultuous final year of marriage, Kardashian officially filed for divorce from her husband of almost seven years on Feb. 19. The KarJenner family is surely helping her through the emotional time, and her friends are doing just the same. Chrissy Teigen's quotes about Kim Kardashian and Kanye West's divorce reveal they've been in touch.

Teigen sat down with Andy Cohen on his show Watch What Happens Live on April 20 where she answered a slew of fan questions. When one fan asked if John Legend had been in touch with West amid the divorce, Teigen admitted they speak to Kardashian much more than her ex.

“I have definitely been in touch with Kim more than John has been in touch with Kanye,” Teigen responded. “Anyone knows Kanye, it’s that he goes off the grid. It’s hard to ever contact Kanye, but Kim is doing OK. I know Kim gave her all for everything.”

Teigen went on to say she thinks it's unfortunate the marriage didn't pan out and the outcome threw her for a loop. “It’s honestly a shame that it didn’t work out because I saw them being up for every relationship. I really did, but I know she tried her best," she said.

You can see Teigen comment on Kardashian's divorce below.

Kardashian and West are still navigating their divorce, but early negotiations have been amicable. Kardashian filed for joint legal and physical custody of their kids and West responded by requesting the same. The pair has a prenup in place, and neither star has contested it.

The filing was heartbreaking for Kimye fans, yes, but it hardly came as a surprise. The pair had reportedly been living separately leading up to the divorce and were said to have been in marriage counseling. Things seemed to turn especially rocky after West's 2020 presidential run, and his increasingly bizarre social media behavior, which, at times, took aim at his wife.

Kardashian has yet to speak out about the divorce, but it sounds like she's got a lot of support behind her.