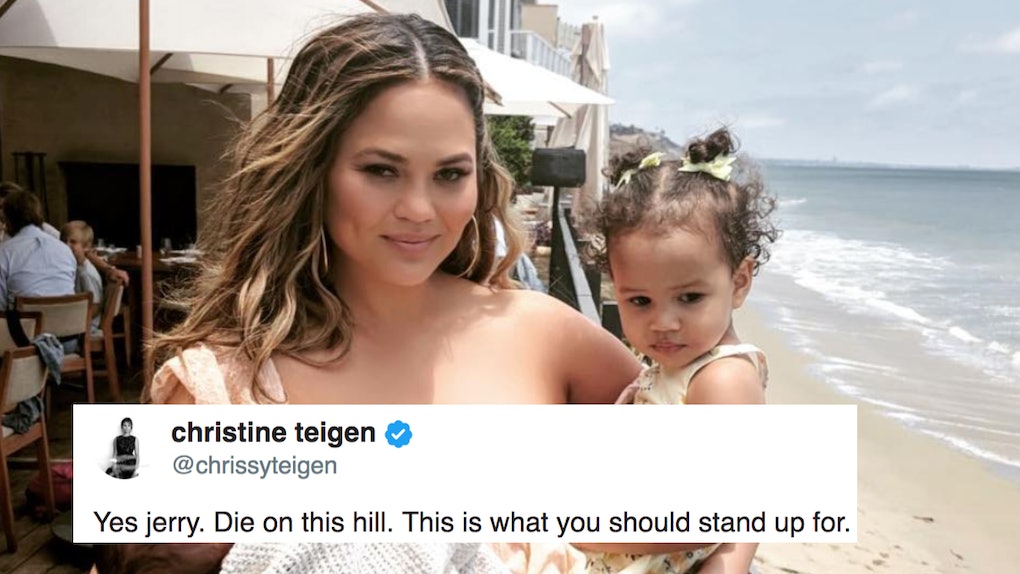 Why won't people ever learn? Do. Not. Come. For. Chrissy. The entrepreneur recently shared an unsettling story about a man who snapped pictures of her inside her car while she was privately pumping breastmilk for her baby and it's outrageous. What are you doing, bro? Can't you feel yourself being a major creep? Teigen spotted him and took to Twitter to call him out. Chrissy Teigen's message to the man who took topless photos of her is direct, to the point, and right on the money. Sure, you'd think a clapback from Teigen herself would be the end of it, but no. Other trolls jumped to the man's defense, making this whole thing even wackier. What planet are we living on, anyway?

E! Online reports Teigen first described the incident in a tweet that has since been deleted. She wrote, "... to the man who took photos into our car as I was topless and pumping you can go f*ck yourself if you sell them. If I wanted to show you my salami nipples I'd show you my salami nipples on my own doing!" While the reasons for her deleting the post are unclear, a few comments to other users who chimed in still remain online.

One Twitter user offered a lame defense for the man, claiming if Teigen's car was in clear view, then it's fair game to take pictures of her. The user also suggested she should get tinted windows if she doesn't want the public's prying eyes in her vehicle. (I can't insert an "eye roll" emoji large enough to express my feelings on this.) The reasoning and argument behind this man's logic are enough to send me spiraling into a raging feminist hole for the next week. But then again, I'm not Chrissy Teigen. She handled the jerk in a much calmer, more succinct fashion than my boiling blood would ever allow.

The man's message stated, "Then get tinted windows, it wasn't in her garage. It's still out in plain view of the public so it makes no sense to even be upset about it."

Teigen responded, "Yes jerry. Die on this hill. This is what you should stand up for. A man’s right to shoot his camera into my (tinted) car. This is a great cause."

Slow clap, please. People who can't see what's wrong with a stranger taking photos into a person's window at night while she breast pumps are the kind of people that make the rest of us question society and my efforts to fight for what's right at all.

Another woman suggested if Teigen shared a photo of herself pumping it would be a way to upstage the photo taker. Teigen, who is not shy about her personal life, responded to this woman, too, explaining the difference between making the choice to share a personal photo and having someone take the liberty of snapping one on their own.

The woman tweeted at Teigen, "You shared a lovely bf photo the other day. Share one for the pumping moms! Wind outta that fools sails." She responded, "Oh I am definitely happy to! It’s most of my day just so creepy to be sitting in a car, dark out, and see flashes and a dude."

Right. That makes sense, because... WAIT, WHY AM I STILL EXPLAINING WHY THIS MAN'S ACTIONS ARE INAPPROPRIATE?

Chrissy, I'm just so sorry. This is why we can't have nice things. You are this nation's angel warrior and everyone else is the worst.