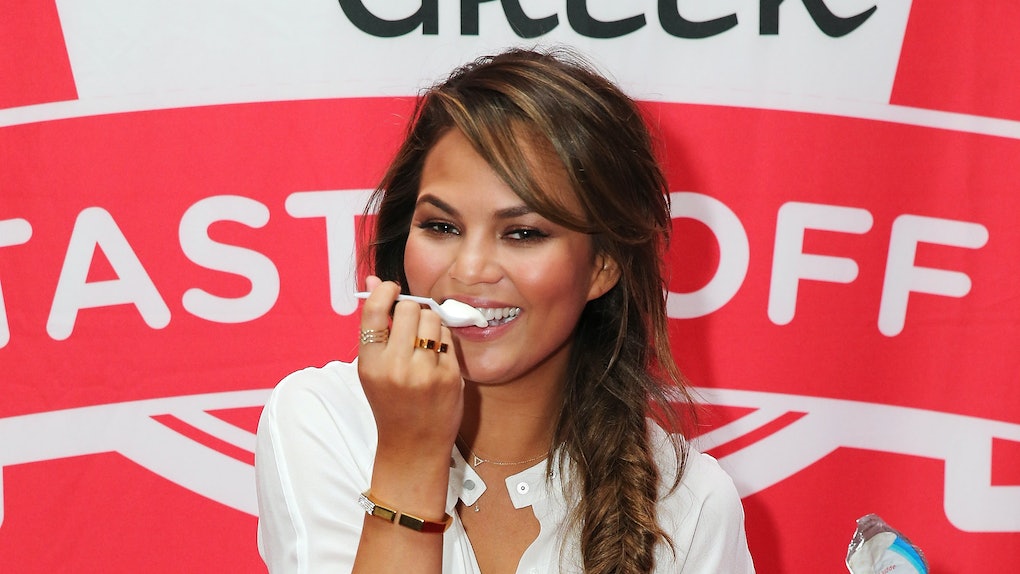 Chrissy Teigen's Favorite Foods Only Make Us Love Her Even More

If the real world held a prom, I'm pretty sure Chrissy Teigen would be unanimously voted prom queen. She's the A-list star we want but don't deserve, the all-around funny, down-to-earth cool girl that we all aspire to be. Really, it's no surprise that Chrissy Teigen's favorite foods just make us fall in love with her even more. Like, for real, watch your back, John Legend.

Teigen's favorite foods run the gamut from the least fancy food you can imagine, to some pretty complicated recipes and expensive watering holes. The reason why Teigen has become such a food icon is simple: She's honest, passionate, and actually knows what she's talking about. Teigen is a seasoned cook, with two bestselling cookbooks already under her belt. So, when it comes to food, Chrissy Teigen's opinions are taken very, very seriously.

Luckily for us mere mortals, Teigen is an open book when it comes to talking about food. She tweets about it, Instagrams it, and talks candidly about it in interviews, so the wealth of information we have about Teigen's taste buds is, put simply, never-ending.

You can never take too much advice from Chrissy Teigen (a lifestyle mantra to live by). Here are 11 of her favorite foods, ranging from a quick fast food spot to her more, shall we say, sophisticated cravings.

Pho is Chrissy Teigen's go-to when she's hungover. It's an "amazing hangover cure," she told Refinery 29. She's also just as obsessed with ramen, particularly "ramen for like that milky Tonkotsu very porky broth."

I personally love pho with cilantro and hot sauce. Chrissy, when are we getting lunch?!

One of Teigen's fast food joints of choice is Shake Shack, which she claims is better than California fast food royalty In-N-Out. If you ask me, that opinion is almost as blasphemous as her claim about Chick-Fil-A being overrated.

Look, I love Chrissy as much as the next girl, but I've got to draw the line with anyone who insults In-N-Out and Chick-Fil-A in the same damn interview. Watch yo'self, Chrissy.

One of the snacks Teigen always keeps at her house is a variety of pickled peppers. She puts them in dishes "when I want that crunchy bite of heat," but Teigen also told Delish, "I mainly just munch on them. I love intense spice, and sour, too—anything super acidic."

I can't say I've ever had a pickled pepper, but I'm way more likely to try one now.

Everyone has a weird food combo that they love. Everything bagels are the sh*t, but Chrissy Teigen prefers hers with peppercini, which I believe is just an Italian word to refer to hot chili peppers. TBH, I'm not sure how I feel about it.

I've yet to try this combo, but you can bet I'm going to get both of these snacks on my next grocery run to see how well they actually go together.

I'm very obsessed with Thai food, to the point where I'm almost freaking religious about it. So you can imagine how stoked I was to findout about Chrissy Teigen's preferences for Thai restaurants in Los Angeles: Hoy Ka and Pa Ord. Her order is usually pad see ew (me too!!!!!!), in addition to boat noodles (yeah, no clue what those are, but I will definitely start ordering them now).

Teigen's not much of a coffee person (ugh, Chrissy, you're killin' me), but she does claim to love a "super milky, super creamy" vanilla latte. I'm guessing she probably owns one of those wildly fancy, Inspector-Gadget-esque coffee machines that pumps out the perfect shot of espresso every time.

Once and for all, Chrissy Teigen has settled the age-old debate about whether pineapple on pizza is a massive yay or a disgusted nay. What's more, she thinks that the perfect combo for pizza toppings is pineapple and Canadian bacon — which, fine, I guess I can live with that.

One of Chrissy Teigen's latest cravings has been Mediterranean flavors, because she thinks the cuisine is "so affordable and so amazing." She's been incorporating a bunch of Mediterranean recipes into her latest cookbook, so luckily for us, we can get our own Mediterranean fix at home.

Panera Bread has perfected the art of the broccoli cheddar soup bread bowl so well that it gets a Chrissy Teigen stamp of approval. Honestly, I don't know anyone who isn't a fan of that cheesy, carb-loaded goodness.

Chrissy Teigen is real enough to admit there's a little bit of a contradiction in being super intense about fancy recipes then loving fast food, but she doesn't really care. She's admitted that she's very organic and clean when she cooks at home, explaining in an interview with Delish, "I'm meticulous and kind of insane about it. But sometimes you just want a Doritos Locos Taco."

If you weren't already in love with Chrissy Teigen (which I would call bullsh*t on anyways), this will make you fall for her hook, line, and sinker: She puts ranch dressing on literally everything. "I eat ranch dressing with EVERYTHING," she told Delish. "Always with fries."

Words to live by, people.