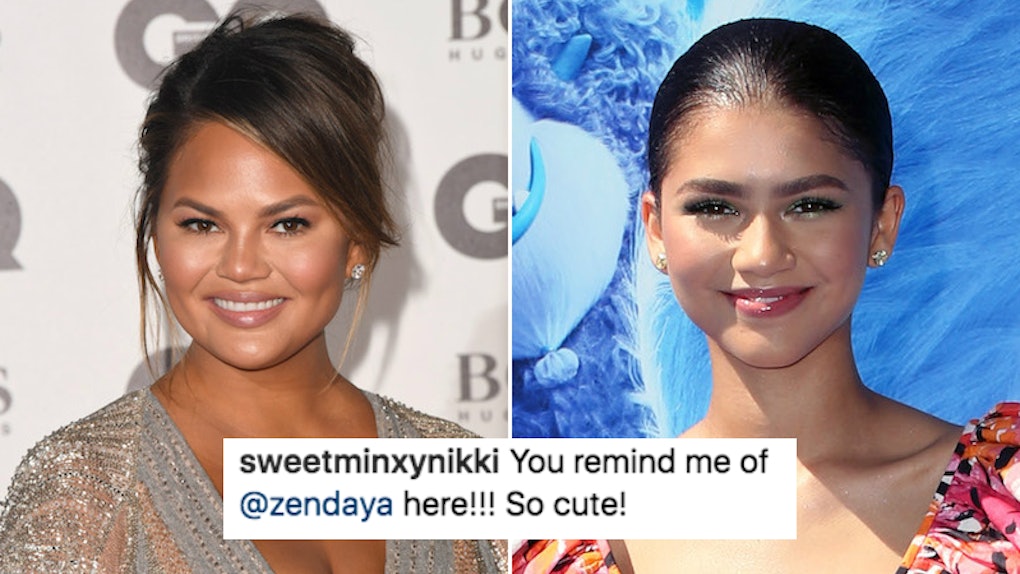 Chrissy Teigen is a phenomenon in so many ways. She is somehow so wealthy and famous but equally down to earth and relatable. She's just a few years older than me, but has established multiple careers across multiple industries, married award-winning musician John Legend, and popped out two perfect babies. She's sassy and smart and sweet and sexy and lots of other impressive "s" words. Surely, someone like her is too magical to be true. She proved this yet again when she recently shared a throwback photo of herself that has everyone doing a double take. Chrissy Teigen's childhood photo will have you shook because it looks like she traveled back in time and swapped bodies with Zendaya. You heard me right. They look exactly alike.

In fact, Chrissy Teigen's childhood photo is somewhat of a phenomenon in its own right. Immediately after Teigen posted it, fans noticed how similar she looked to a young Zendaya. It's gotta be something about their facial shape and feature symmetry, but still. It's... spooky? In the photo, a super sweet and youthful Teigen is casually smiling at a camera. Her shirt says, "It's not easy being cute." Hilariously, Teigen captioned the photo, "It really isn't." In just 12 hours, it gained nearly 700 thousand likes and lots of "Zendaya, is that you?!" comments.

For reference, here's a photo of Zendaya as a baby, too:

Sure, sure, you can see the resemblance here, but now watch what happens when I do this...

BAM! That's still Chrissy, not Zendaya. Do you believe me?

Teigen posted this teenage photo earlier in February and initially, fans couldn't help but notice how much she looked like another young star, Selena Gomez. However, upon further inspection, she also looks like a teenage Zendaya, too.

To compare, here's a picture of Zendaya making a similar smile.

You see it, right? Tell me you see it!

While I think the resemblances to Zendaya and Selena Gomez are obvious, there's one lingering lady fans can't help but see reflected back to them in Teigen's baby photo, too, and that's her own daughter, Luna.

If you put a picture of baby Chrissy next to a photo of baby Luna, they could be twins!

Those genes, yo! Naturally, Chrissy's iconic cheekbones and kind expressions were passed down to her gorgeous little baby.

Just to stay in theme, Teigen's husband and their son miles are uncannily similar, too. The moment Miles made his debut to the world, fans lost their minds over how much he looks like his dad. Have you ever seen that meme about the baby that "looks more like John Legend than John Legend looks like John Legend?" That's like Miles, but better, because it's his actual son.

What's a girl gotta do to buy some of these genetics, man? Chrissy, can you sell your and John's DNA at Target? (Is that too far?)