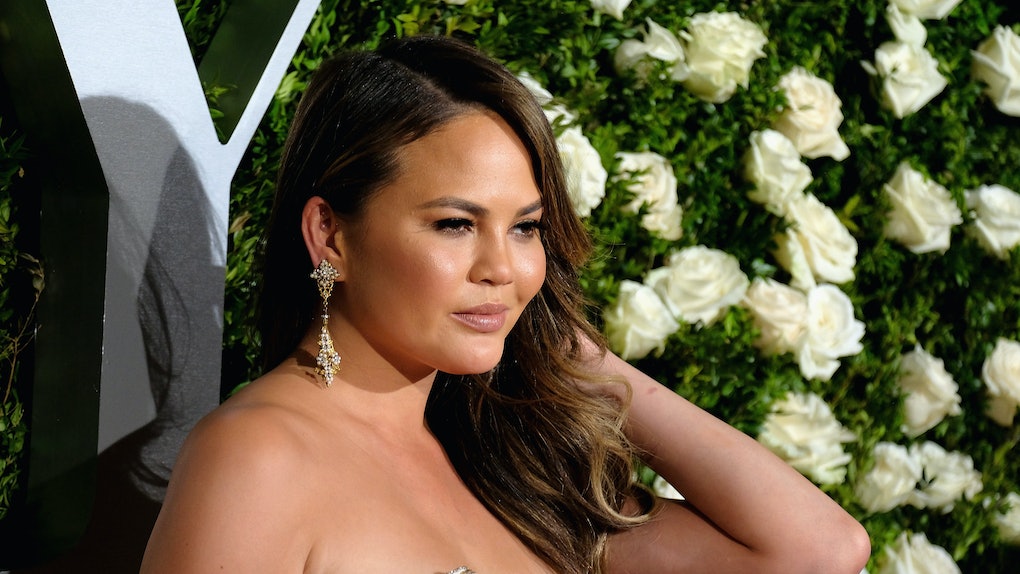 By now maybe you've heard that Chrissy Teigen has added a beautiful addition to her family. She obviously thought about it really hard, consulted with her loved ones and husband, and decided to take the next big step. Chrissy Teigen got bangs, and now we all really, really want bangs. (Plus there's that whole thing about how she's having another baby, too.)

The world is thrilled to hear that Teigen and her baby daddy John Legend are welcoming a second child in the upcoming year, and now we have more to celebrate. The hilarious model and mother put out the call on Twitter asking if she should make the hair chop or not, and heavily monitored feedback from fans. In the end, celebrity hairstylist Jen Atkin came over and had the honor of giving Teigen some serious fringe.

In her big bangs announcement, Teigen took to Instagram to post a video of Atkin pulling on her strands to prove to the haters at home that they're real.

TBH, she looks SO amazing, and it's giving us total hairstyle envy.

Congrats to @johnlegend and @chrissyteigen on the addition to their family...Chrissy’s new bangs (oh and another baby)

Teigen captioned her post, "I did it!!", and in the video tells Atkins, "I love it. You really are talented."

Thank goodness she likes it, because Teigen truly didn't take the decision lightly.

In fact, she created a poll on Twitter looking for feedback with the options "BANGS (CUTE!) (YOLO!)" and "NO BANGS (INSTANT REGRET)."

Judging by the numbers shown here, it looks like over 157,500 people weighed in and tipped the scale towards "No."

Public, you think Chrissy Teigen is going to listen to what we have to say? She's Chrissy motherf*cking Teigen! Her whole thing is doing the opposite of what she's supposed to! Still, it all worked out, and she looks amazing... because obviously.

Plus, all of this hair excitement truly does come second next to her baby news.

Teigen made the baby announcement on Tuesday, Nov. 21, by posting an adorable video of her daughter baby Luna, sitting on her stomach. In it, she asks Luna, "What's in here?" to which Luna replies, "baby."

A source told People magazine John and Chrissy are both excited to watch Luna grow into a big sister. The source said,

They are so excited to make Luna a big sister. They think Luna will do a great job with the baby and they’re really happy to be expanding their family.

Additionally, both Legend and Teigen have been open about their pregnancy struggles, making this news extra exciting.

Teigen spoke with InStyle magazine about the decision to use IVF (in vitro fertilization). She explained that after starting with 20 embryos, the couple narrowed it down to three that, "you know, that are going to be good for your body."

She's also been extremely vocal about her struggle with postpartum depression after delivering baby Luna. She said, "It wasn’t just a mental thing of, you know, ‘I’m sad.' I actually couldn’t move.”

Teigen also says she's prepared for her next baby, but understands the risk of mental health struggles that might come with it. She added,

I have really good days and really bad days, and I don’t tend to talk about the really bad days. But I would hate for people to think those days didn’t exist.

We're just so happy to see you're feeling (and looking) great, Chrissy! Congratulations on everything, bangs and baby and all.