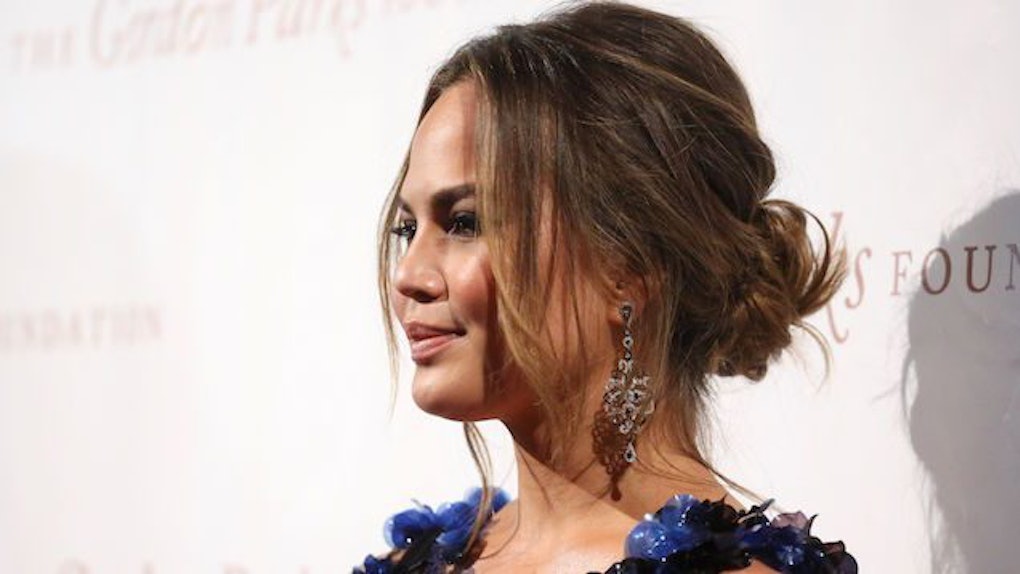 No one's perfect, but you can be forgiven for thinking model Chrissy Teigen is about as close to perfection as it gets.

On the surface, the 31-year-old Sports Illustrated Swimsuit stunner lives each day with husband John Legend and daughter Luna Simone to the fullest.

Most of the time, this family makes it look effortless, but, it appears Chrissy Teigen struggles with the same serious problems plenty of other folks do.

Recently, the 31-year-old opened up about her battle with postpartum depression and anxiety in a letter she wrote for Glamour's April cover story.

Speaking about how something inside of her changed after she went back to work from maternity leave, Teigen wrote,

Getting out of bed to get to set on time was painful. My lower back throbbed; my shoulders — even my wrists — hurt. I didn't have an appetite. I would go two days without a bite of food, and you know how big of a deal food is for me. One thing that really got me was just how short I was with people. I would be in my dressing room, sitting in a robe, getting hair and makeup done, and a crew member would knock on the door and ask: 'Chrissy, do you know the lyrics to this song?' And I would lose it. Or 'Chrissy, do you like these cat ears, or these panda hands?' And I'd be like: 'Whatever you want. I don't care.' They would leave. My eyes would well up, and I would burst into tears. My makeup artist would pat them dry and give me a few minutes

Holy hell. Would you ever think Chrissy Teigen struggles with postpartum depression?

I couldn't figure out why I was so unhappy. I blamed it on being tired and possibly growing out of the role: 'Maybe I'm just not a goofy person anymore. Maybe I'm just supposed to be a mom.' When I wasn't in the studio, I never left the house. I mean, never. Not even a tiptoe outside. I'd ask people who came inside why they were wet. Was it raining? How would I know — I had every shade closed.

Most days were spent on the exact same spot on the couch and rarely would I muster up the energy to make it upstairs for bed. John would sleep on the couch with me, sometimes four nights in a row. I started keeping robes and comfy clothes in the pantry so I wouldn't have to go upstairs when John went to work. There was a lot of spontaneous crying.

Eventually, Teigen went to the doctor, presumably to get some answers about what she was experiencing.

Before the holidays I went to my GP for a physical. John sat next to me. I looked at my doctor, and my eyes welled up because I was so tired of being in pain. Of sleeping on the couch. Of waking up throughout the night. Of throwing up. Of taking things out on the wrong people. Of not enjoying life. Of not seeing my friends. Of not having the energy to take my baby for a stroll. My doctor pulled out a book and started listing symptoms. And I was like, 'Yep, yep, yep.' I got my diagnosis: postpartum depression and anxiety. (The anxiety explains some of my physical symptoms.)

Finally, Teigen could at least put a label to everything she was coping with.

In her emotional letter, Chrissy talked about how John Legend stayed by her side through everything. She wrote,

He's exactly as compassionate, patient, loving, and understanding as he seems. I'm grateful for the people around me. John has been incredible over the last nine months, bringing me my medicine and watching horrible reality TV with me. He is not the goofiest guy, but he has gone out of his way to indulge my sense of humor. When I was having a good day, he would go to Medieval Times with me and put on the crazy period hat! He sees how much my eyes light up when he does that stuff, and he knows that's what I need. I know he must look over at times and think: My God, get it together. But he has never made me feel that way. He wants me to be happy, silly, and energetic again, but he's not making me feel bad when I'm not in that place.

Speaking about her decision to go public with her battle with postpartum depression, Teigen wrote,

Postpartum does not discriminate. I couldn't control it. And that's part of the reason it took me so long to speak up: I felt selfish, icky, and weird saying aloud that I'm struggling. Sometimes I still do. I'm speaking up now because I want people to know it can happen to anybody, and I don't want people who have it to feel embarrassed or to feel alone. I also don't want to pretend like I know everything about postpartum depression, because it can be different for everybody. But one thing I do know is that — for me — just merely being open about it helps.

Thank you for being so brave, Chrissy Teigen.

Citations: Chrissy Teigen Pens Essay on 'Painful' Battle with Postpartum Depression: 'I Couldn't Figure Out Why I Was So Unhappy' (People)