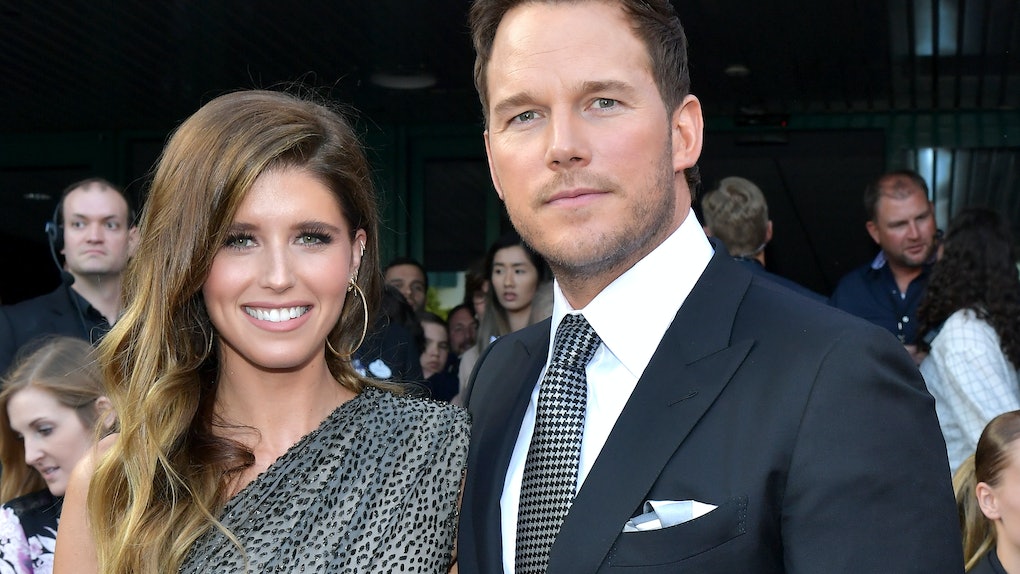 Newlywed life looks good on Chris Pratt and Katherine Schwarzenegger, and the actor is making sure to document their first couple weeks as a married couple. While it's been less than a month since the happy couple tied the knot on June 8, it's safe to say that Pratt has already gotten the Instagram husband thing down — and he's not afraid to toot his own horn. Chris Pratt's photo of Katherine Schwarzenegger and her friends has him humble bragging about his photography skills in the comments section, and it's hilarious.

On Friday, July 5, Schwarzenegger took to the social media platform to share the photo, which appears to have been taken from a family gathering. Various members of the Shriver family and her sister, Christina Schwarzenegger, were all tagged in the image, which was set across the backdrop of a stunning sunset.

In the caption, she included a shoutout to her husband for capturing the image, writing, "My ladies (incredible photography by my love @prattprattpratt )." The acknowledgement was well-deserved, and Pratt took to the comments section to give himself a pat on the back for his Instagram husband transformation with a dose of his signature humor.

“Look guys. Its no big deal," he joked. "I’m just a very good photographer. I capture real moments, that’s all. The composition? Is it breath taking? Of course. But I can hardly take credit. First I wanna thank God. Next, I must credit the makers of the iPhone. Portrait mode. Am I right?"

He then hilariously shed some light on the taking of the image by not-so-subtly taking down his fellow photographers who'd tried and failed to capture the perfect shot.

"A lot of other people tried to take pictures of this stunning group at the same time as me," he continued. "They didn’t succeed. I did. Does that make me some kind of a hero? Yes. Of course. But am I gonna sit here and brag about my photo? Nope. Not me. The photo speaks for itself. Any picture is worth a thousand words. The same is true for this picture. It speaks words like, genius, artist, photographer, wow!, etc. You get it." As the icing on the cake, he added the hashtag #behumble.

In my opinion, Pratt definitely deserves some kudos for this shot, because it's a vibe. I'm sure he had plenty of time to practice during the couple's honeymoon in Hawaii, although he took a turn in front of the camera for a hilarious NSFW Instagram featuring his naked backside just a few days earlier.

In short, Pratt got way too much sun during the couple's Hawaiian getaway, and the actor took to the social media platform to share the results.

"Suns out guns out I might have got a toouuuch crispy on the honeymoon#Aloe," he wrote. Schwarzenegger simply commented with three fire emojis.

The honeymoon might be over, but I have a feeling that we'll all be seeing more of Pratt's Instagram husband skills (and humble brag comments) during the rest of the summer.