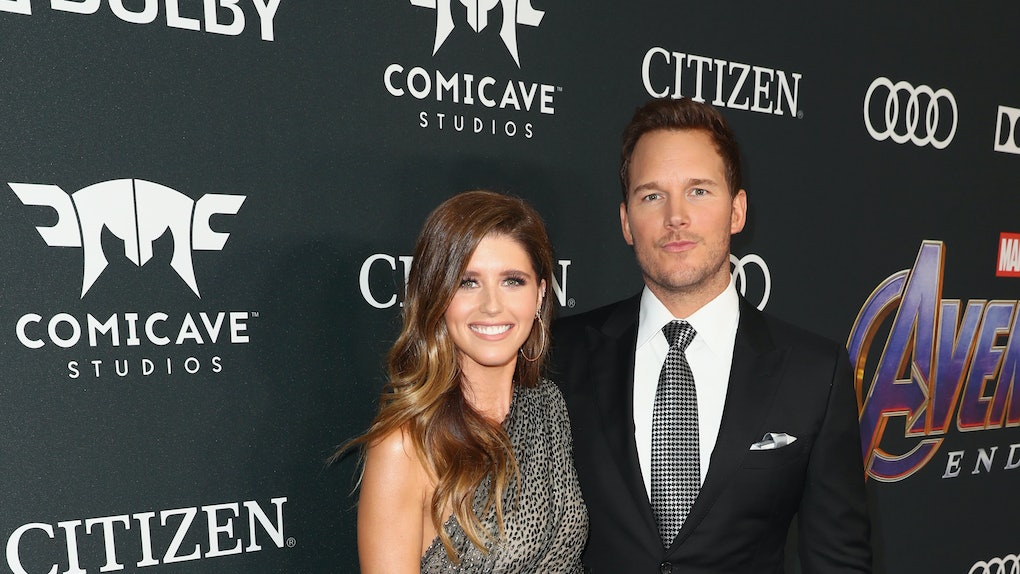 A couple composed of comedy and political royalty tied the knot on June 8: Chris Pratt and Katherine Schwarzenegger got married in Montecito, California, among an intimate group of family and friends. A wedding guest told People that venue was "beautiful" with its flowers and greenery, and that it was a "very romantic setting for a wedding." Sounds like your average, cute, nuptial moment, right? And their Insta posts reflect that, too. The couple (separately) posted the same picture of them lovingly gazing into each others' eyes. Still, Chris Pratt and Katherine Schwarzenegger's wedding Instagram captions are little strange, given that they are legit almost the same caption.

Don't get me wrong! What they said in their joint caption was sweet, and tender, and totally on-brand for these two. That isn't the problem. It's just... why are their long, drawn-out Insta captions pretty much identical?

You'd think that celebrating your wedding would be the number one moment where you'd avoid posting the same caption as the other person. I mean, it's kind of like when you and your crew all go out somewhere, and you coordinate to ensure that no two people are posting the same Instagram caption. Yeah, well, Pratt and Schwarzenegger DGAF about any of that.

This is Schwarzenegger's caption...

And then this is Pratt's:

Yesterday was the best day of our lives! We became husband and wife in front of God, our families, and those we love. It was intimate, moving, and emotional. We feel so blessed to begin this new chapter of our lives. We are so thankful to our families and our friends who stood with us.

They're literally the same up until they thank Giorgio Armani for the dress and the suit, switching off based on who's making the Insta post. They both close, "This morning we feel nothing but blessed."

Of course, there's nothing wrong with being at a loss for what to post on social media. We've all been there. But it just feels kind of next-level to roll-out the same exact picture with basically the same caption. Where is the effort? Where is the perspective?

Putting my expert detective skills to the use, I'm willing to bet that Pratt was the ghostwriter for this caption. Again, it's on-brand for both of them. But a scroll through Schwarzenegger's account shows that Pratt has come in clutch with Insta captions before. At the tail-end (literally) of one of her posts from their farm visit in February 2019, there's a note from Pratt that says, "Katherine asked me what to write, so I wrote the above even though it is not true. Full disclosure: I have very soft hands. I literally cut my hand today I think, on a lamb. I am from Hollywood. Love, Chris."

This was about a month after Schwarzenegger and Pratt announced their engagement in January 2019. On Jan. 14, Pratt shared a picture of the two embracing — engagement ring strategically facing the camera — to Instagram. The post read:

Sweet Katherine, so happy you said yes! I’m thrilled to be marrying you. Proud to live boldly in faith with you. Here we go!

My sweet love. Wouldn’t want to live this life with anyone but you.

And yeah, the two did post the same exact Instagram picture in this instance, too. But at least these posts show they can def come up with something creative and different to say when sharing couple-y posts. Why they shared their wedding pics they way they did will forever mystify me.

More like this
When Are Ariana Grande & Dalton Gomez Getting Married? Here's The Reported Tea
By Corinne Sullivan
Clare Crawley Clapped Back At A Troll Who Said Dale Moss Should Dump Her
By Candice Jalili
Bachelor Nation's Reactions To Colton Underwood Coming Out
By Candice Jalili
Stay up to date