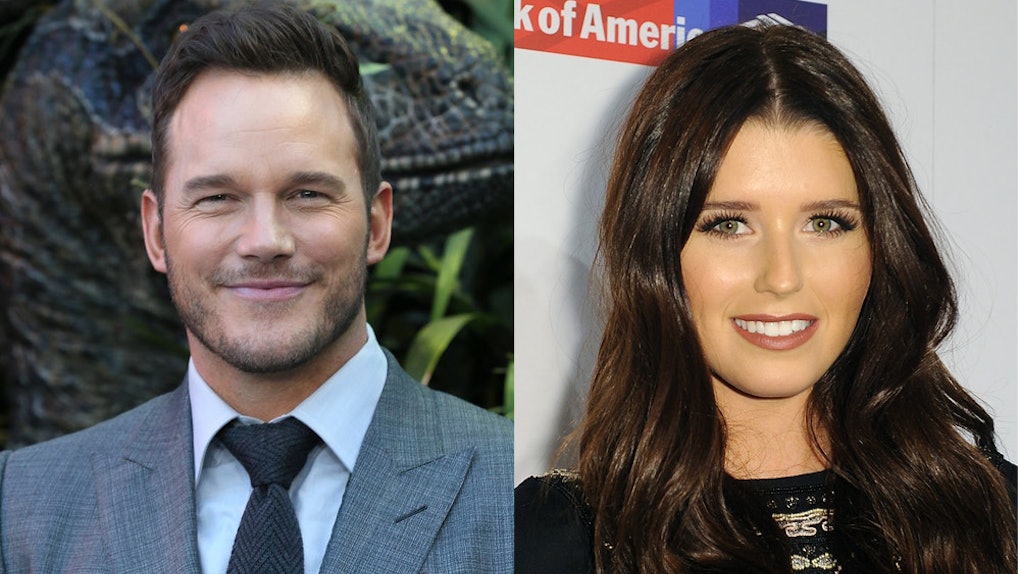 This year, Katherine Schwarzenegger got a really special present from Chris Pratt for her birthday — a public declaration of love. Yep, after months of speculation that these two are dating, Chris Pratt and Katherine Schwarzenegger are finally Instagram official. Which means it's time to say sorry, ladies, the Guardians of the Galaxy star is officially off the market and very much in love with Schwarzenegger... and honestly, they're just so adorable together, I am very much OK with that.

If you haven't been following along with their love story, it started early this summer. TMZ first spotted the two together having a romantic picnic in Santa Barbara back in June 2018. The rumors that they were dating started pretty much immediately, and were confirmed pretty quickly when sources at the time told People that they were actually casually dating and, in fact, had been set up by Schwarzenegger’s mom, Maria Shriver. (What a matchmaker!) Since then, the two have seemingly been inseparable. They've been seen attending church together, going on a bike tour in Santa Monica, out on plenty of romantic date nights, and, most importantly, meeting each other's family members. How wholesome!

But despite being, by all appearances, a legit couple, neither party had officially confirmed the relationship — not, that is, until Schwarzenegger's December 13 birthday when Pratt made his feelings and their relationship status very clear by posting a collage of photos of the two of them with the sweet caption: “Happy Birthday Chief! Your smile lights up the room. I’ve cherished our time together. Thrilled God put you in my life. Thankful for the laughs, kisses, talks, hikes, love and care.”

Chief! Of course, Pratt’s pet name for her would be Chief. Seriously, how sweet are these two? (And can you even with that photo of them in matching animal face masks on the lower left corner?) But while they may have made their relationship officially, well, official, don't start planning a wedding for them quite yet, because this new step in their relationship doesn’t mean that either of them are rushing into marriage.

"Chris just finalized his divorce from Anna [Faris] a couple months ago, and he’s happy with just dating Katherine for now,” a source told ET. “The couple has a lot of fun together and is fully involved in one another’s life," the source shared, adding that they are "in a committed relationship. There just isn’t a rush to take it to the next step right now. Chris is enjoying the dating process." But that doesn't mean he’s not taking this seriously, as the same source added that it’s a “serious relationship and everything is going well."

Well there you have it, folks. These two are just about as boo'd up as you can possibly get. Talk about an amazing birthday gift. I mean, don’t get me wrong, presents are nice, but an unequivocal public display of affection? Now that is priceless. Here's to love and wishing Schwarzenegger a very happy birthday!