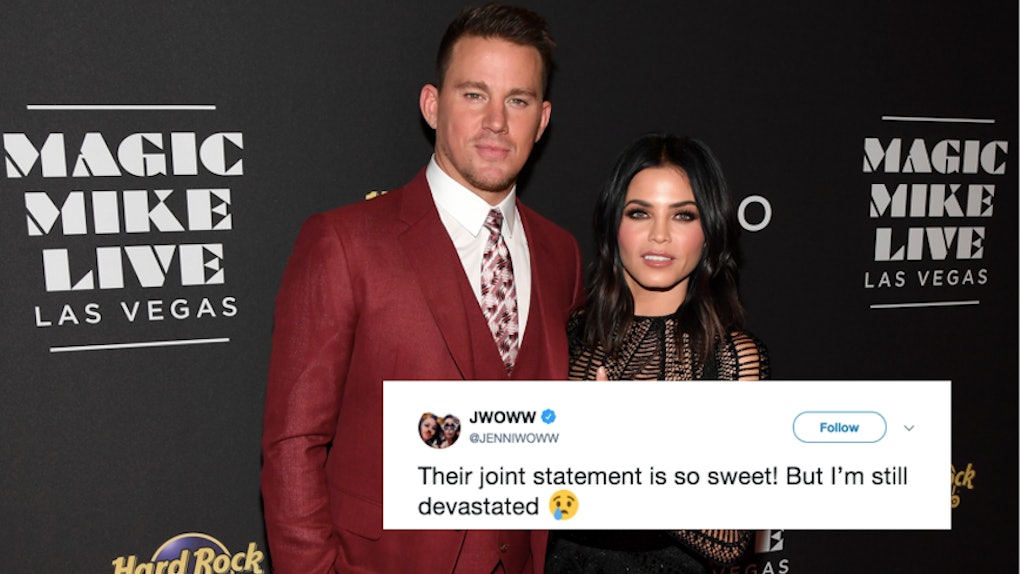 By now, it's probably safe to assume that everyone and their grandma knows that Channing Tatum and Jenna Dewan are separating. All I can manage to think about is whether or not rewatching Step Up for the umpteenth time would make me feel better or worse about this very tragic situation. As it turns out, we're not the only ones who are distraught — celebrities' tweets about Channing Tatum & Jenna Dewan's breakup prove without a doubt that pretty much everyone agrees these two were everything.

And as with any large-scale tragedy, there were several phases of coping with this troubling news. First, of course, comes the shock. Then, the utter denial. (Def googled "Channing Tatum and Jenna Dewan divorce hoax" more than I'm proud to admit.) Then, finally, reluctant acceptance.

While it might not seem fair that Hollywood continues to promise us happy endings and yet manages to drop the ball at just about every turn, it's important to realize — even when a relationship is on a public platform — that Tatum and Dewan don't owe anything to anyone when it comes to their decision to end their marriage.

And although, their joint statement was a v classy way to go, it's kind of sad that their fame made it impossible for them to separate privately. But it's also great to see that (most) of their peers are being supportive and are equally as bummed as we are.

Savannah Chrisley, from the reality show Chrisley Knows Best, pretty much sums it up. How are we ever supposed to believe in the unachievable Hollywood trope that love will conquer all when one of the most solid-seeming celebrity couples couldn't make it work? Well, because no matter you who are, celebrity or not, relationships aren't easy.

And sometimes no matter how "right" something feels at any given moment — no one can say with certainty where or with whom they'll end up, because life's got all kinds of surprises to troll us with.

Jenni Farley (aka JWoww) from the infamous reality show Jersey Shore dropped the d-bomb in her tweet commending the couple for deciding to come forward with a joint statement. But devastation aside, I must admit the intrigue over who Tatum and Dewan will be seen with next is definitely starting to pique my curiosity.

And who could forget the ultimate girl next door from The Bachelor franchise, Amanda Stanton? "Emotional" is right. Part of me wishes it was possible to create an intricate photo mosaic of the Step Up DVD cover out of pictures of everyone's faces when they heard the news.

It's OK Amanda. From one Chenna (Jenaning? Channa? Idk, are celebrity couple names still a thing?) lover to another, the pain never really goes away, but it does get easier with time.

We can always count on comedian Loni Love to turn up with some v accurate GIF realness. Although I wasn't on stage when I found out that Tatum and Dewan were through, you best believe I would have needed someone to escort me off in a similar manner if I had been.

In the end, all we can do is be thankful when we're thrown a bone from time-to-time. I had all but given up on the prospect of Beyoncé and Jay-Z sticking it out, but thankfully it ain't always bad news. Yet.

But you know what? Major props to Kim Schifino, the drummer of indie pop band Matt and Kim for seeing the glass half-full. With almost every sad experience comes an opportunity to grow and evolve...meaning maybe one of us can grow and evolve on over in the direction of newly single Tatum. Too soon? Sorry.

Fortune Feimster, the hilarious actress and comedian best known for her roles on The Mindy Project and Last Comic Standing, also wasn't pleased about the split. And I mean, she's totally right — Tatum and Dewan were one of the most natural seeming and effortless celeb couples who made marriage and kids legitimately seem like the coolest thing ever.

It's comforting to know that other celebs were just as caught-up in the rapture of these two as us common folk. If anything, it's simply a testament to what an awesome partnership Tatum and Dewan had going. But just like anyone else, wants and needs change, and it's only fair that the people involved in the relationship make the adjustments they see fit to ensure everyone's happy. If they aren't, then at the end of the day, what everyone else thinks couldn't be less important.