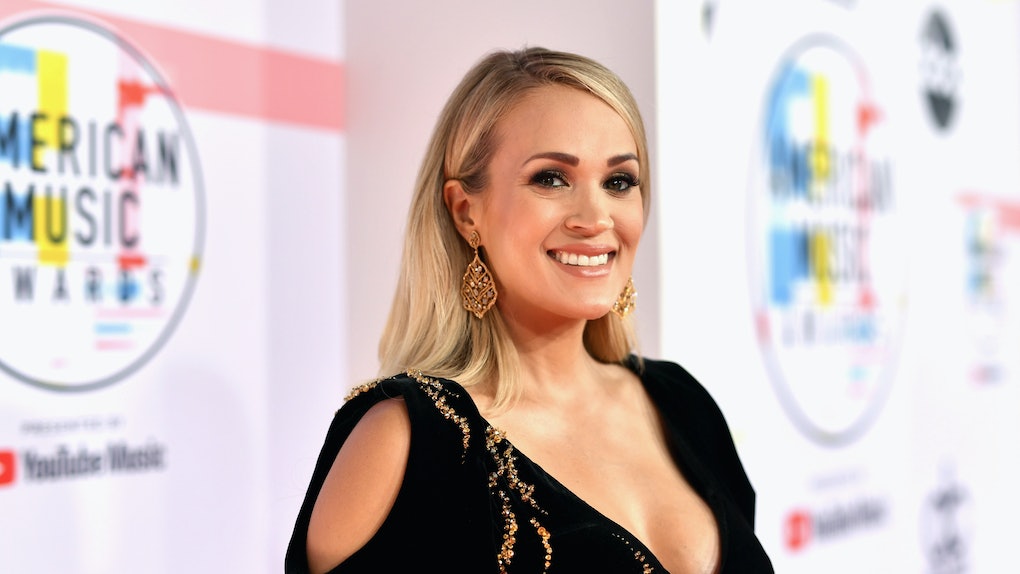 Be still, my heart! It looks like country star Carrie Underwood has welcomed her second child into the world with husband Mike Fisher, and I, for one, am elated. After she announced her pregnancy back in August 2018, I've been anxiously awaiting an update on Baby Number 2, so this day is, for me, a day of celebration. And honestly, Carrie Underwood's birth announcement is so damn adorable that I seriously just can't take it.

On Wednesday, Jan. 23, she took to Instagram to tell her fans the good news that they welcomed their son just days earlier, on Monday, Jan. 21. She also revealed her son's name, and I'm a huge fan of the moniker. (Fun fact: Underwood announced the sex of her baby back in November while opening the 2018 CMA Awards as a co-host with country star Brad Paisley.) Alongside pictures of her husband holding their newborn son, a selfie of herself, the baby, and their firstborn, Isaiah, holding his new baby brother, Underwood wrote,

Jacob Bryan Fisher entered the world in the wee hours of the morning on Monday...his mom, dad and big brother couldn’t be happier for God to trust them with taking care of this little miracle! Our hearts are full, our eyes are tired and our lives are forever changed. Life is good.

Underwood's pregnancy wasn't as easy the second time around, and in October, she told Entertainment Tonight that her second pregnancy was "different" from the first time and revealed that, in some ways, it was more difficult.

"It's definitely different than the first time," Underwood explained. "When they say every pregnancy is different, it really is. Just different symptoms. I feel like this one is a little harder on my body for some reason. But it's been really good."

Underwood was also super honest about her difficulties with getting pregnant, telling CBS Sunday Morning in September that she suffered three miscarriages from 2017 to 2018.

"My son, Isaiah, is the sweetest thing. And he’s the best thing in the world," Underwood said. "And I’m like, 'If we can never have any other kids, that’s okay, because he’s amazing.' And I have this amazing life," Underwood continued. "Like, really, what can I complain about? I can’t. I have an incredible husband, incredible friends, an incredible job, an incredible kid. Can I be mad? No."

Giving me ALL of the feels right now, Carrie.

Underwood's original announcement revealing to fans that she was pregnant came on Aug. 8, when she took to Twitter to reveal some details about her upcoming Cry Pretty tour.

"Mike, Isaiah and I are absolutely over the moon and excited to be adding another fish to our pond," Underwood told fans in her video that panned out to reveal a shiny "baby" sign was over her head. "This has just been a dream come true with [the] album and baby news and all that stuff and we're just so excited you guys can share in this with us and be a part of this with us."

No, no, Carrie. We want to thank you for allowing us to be a part of your life. A huge congratulations to her entire family on their newest addition!

More like this
Colton Underwood's First Instagram After Coming Out Is Heartfelt
By Corinne Sullivan
Maren Morris' Instagram About "Snap Back" Culture Slams Unrealistic Body Standards For New Moms
By Brandy Robidoux
Why Did Addison Rae Deactivate Her Twitter? Fans Think This Is The Reason
By Brandy Robidoux
Stay up to date