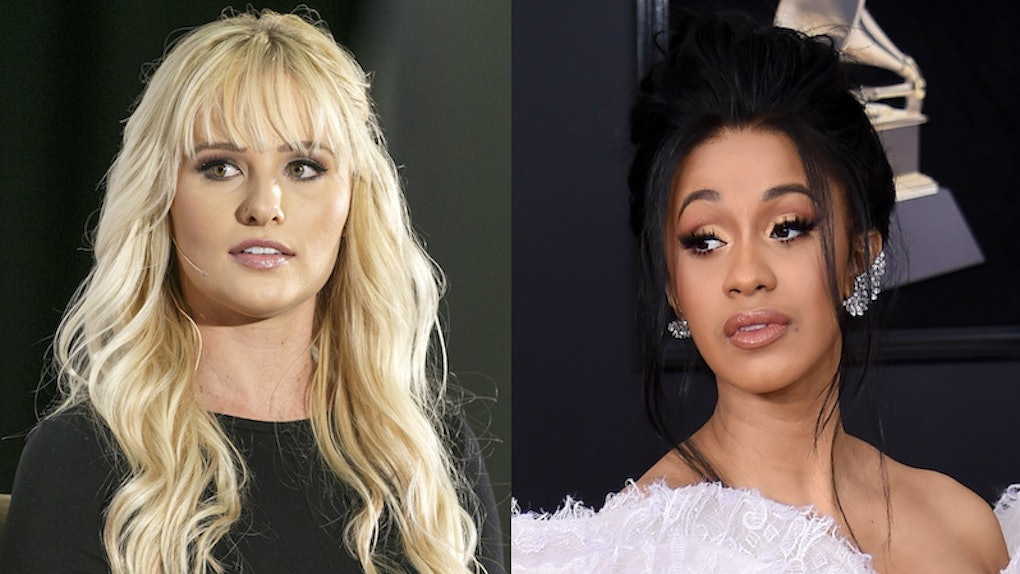 When you think about celebrity feuds, a few notorious ones probably come to mind: Britney Spears and Christina Aguilera is — hands down — my favorite one out there, along with the cringey Drake and Pusha T battle, and Kim K's disputes with... well... a few people. But recently, it appears that Cardi B and Tomi Lahren have been feuding on Twitter, and — let me tell you — their back-and-forth responses are pretty darn wild. So, if you haven't already seen Cardi B's response to Tomi Lahren criticizing her "political rambling," the "Bodak Yellow" singer seriously went all in.

In my personal opinion, Cardi B is a wicked good celeb to follow on social media. She posts super hot selfies, awesome fashion snapshots, and recently, she's been particularly politically active. The "I Like It" singer has been voicing her opinions relating to President Donald Trump's policies, including the government shutdown, and — of course — the wall, and IMO, it's awesome to see the rapper use her platform in such a productive manner. Some of her thoughts from the Jan. 16 video include her thoughts on Trump sending some furloughed employees back to work without pay. She said, "I just wanna remind you that it's been a little bit over three weeks. Trump is now ordering federal government workers to go back to work without getting paid." To close her video, she shared,

We really need to take this serious. I feel like we need to take some action. I don't know what type of action, b*tch, because this is not what I do. But b*tch, I'm scared. This is crazy. And I really feel bad for these people that gotta go to f*cking work to not get motherf*cking paid.

Elite Daily previously reached out to the White House for comment on Cardi B's video, but did not hear back at the time of publication.

NSFW language aside, Cardi B shared her thoughts on the issue. It appears that not everyone was thrilled about the rapper's newfound political voice. On Jan. 16, Fox News reporter Tomi Lahren came after Cardi B for being "the latest genius political mind to endorse the Democrats." She ended her tweet with, "HA! Keep it up, guys!" #MAGA2020"

Correct me if I'm wrong, but Cardi B doesn't seem like the type who would take anyone's B.S. As expected, she responded with — well — a little bit of heat, if you know what I mean. She wrote on Sunday, Jan. 20, "Leave me alone I will dog walk you." Elite Daily reached out to Cardi B's representation for further comment on and clarification of her tweet, but did not hear back at the time of publication.

It appears that "dog walking," when used as a slang term, means beating someone up, which is probably not the best way to deal with conflict.

The TV host replied on Sunday, taking a dig at Cardi's video from this past week, writing, "I’m sure you would. Still doesn’t make your political rambling any less moronic. #BuildthatWall"

Cardi B then proceeded to go all in with her response to Lahren, even leveling an accusation that she is "so blinded with racism." Her response in full, read,

You’re so blinded with racism that you don’t even realize the decisions the president you root for is destroying the country you claim to love so much .You are a perfect example on no matter how educated or smart you think you are you still a SHEEP!

Elite Daily reached out to Lahren's representation for a comment on or response to Cardi B's tweet, but did not hear back at the time of publication.

As of publication, Lahren has not responded to Cardi B's last tweet directed at the TV host on Sunday morning.

A Lahren and Cardi B feud might not be what you thought 2019 would deliver, but it seems clear that Cardi B is not going to sit back and watch the government shutdown without giving her thoughts. According to People, the singer apparently took to Instagram Live on Sunday, Jan. 20 to share more thoughts on why she is politically involved, saying,

A lot of people think I’m dumb, think I’m ghetto because of the way I talk…but just because I’m that it doesn’t make me dumb and one thing I really want y’all to understand about me, I’m a very passionate person when it comes to history and when it comes to political things, and I always been like that.

While Cardi B might be ready to stay vocal about politics, it looks like a friendly Twitter debate with Lahren isn't going to be a part of that voice. So yeah, I guess that's the tea, y'all.