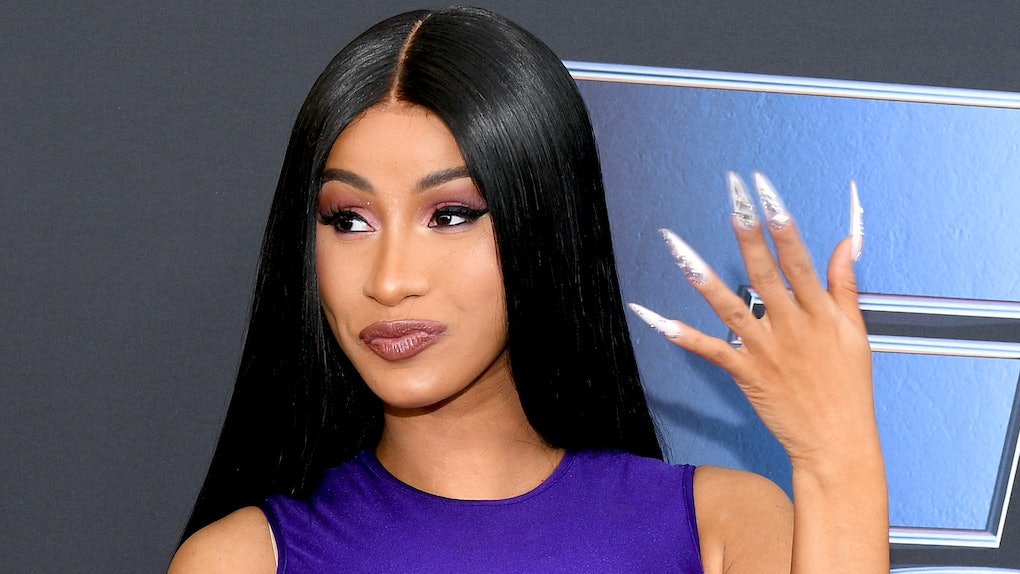 Cardi B released her latest single "WAP" on Aug. 7, and its sexually explicit themes have been quite polarizing. Far-right conservatives, in particular, have been taking aim at Cardi on Twitter over the track non-stop. But the rapper is no stranger to internet trolls, and she's learned to handle them flawlessly. On Aug. 25, Cardi caught wind of a shady tweet she couldn't slide, and she deserves a round of applause for her clapback. Cardi B's response to a troll comparing her to Melania Trump was epic.

The tweet, posted by former congressional candidate and podcast host DeAnna Lorraine, was short, but made a big statement. "America needs far more women like Melania Trump and far less like Cardi B," she wrote.

It's unclear what "kind" of women Lorraine thinks Cardi and Trump are, exactly. Whatever she meant, Cardi soon clapped back in a tweet of her own, pointing out she and Melania are not all that different.

Cardi tweeted a throwback pic from a nude photo shoot the First Lady did during her modeling days, writing, "this pic giving me ' yea you f*ckin wit some wet *ss p*ssy ' vibes ...just sayin."

Basically, Cardi flawlessly made a point about Lorraine's double standard in how she views Cardi and Trump for how they've chosen to embrace their sexuality through the years, but with her trademark wit and using her own lyrics from "WAP." Genius.

A number of conservative critics have fired off insults at Cardi and her "WAP" collaborator Megan Thee Stallion, but no one was more harsh than Ben Shapiro. The political commentator unleashed a scathing video where he read the song's lyrics aloud, criticizing each line as he went. As for Cardi, she defended her new song to the max. In an Aug. 13 interview with I-D, she revealed how she's handled the "WAP" backlash.

“I’ve been really surprised by the reaction, honestly,” Cardi said. “I knew it was gonna have a big impact, I guess, because of me and Megan. But I didn’t know it was going to be so controversial. I never expected that, you know, conservatives and Republicans were going to be talking about the song. I didn’t think the song was as vulgar as they said it was, you know? Like, I’m so used to it. I’m such a freak that I didn’t think it would be a big deal. I didn’t think people would think it was so out of this world."

Now, after seeing Cardi's spitfire response to her Twitter hater, trolls might want to think twice before coming for her.