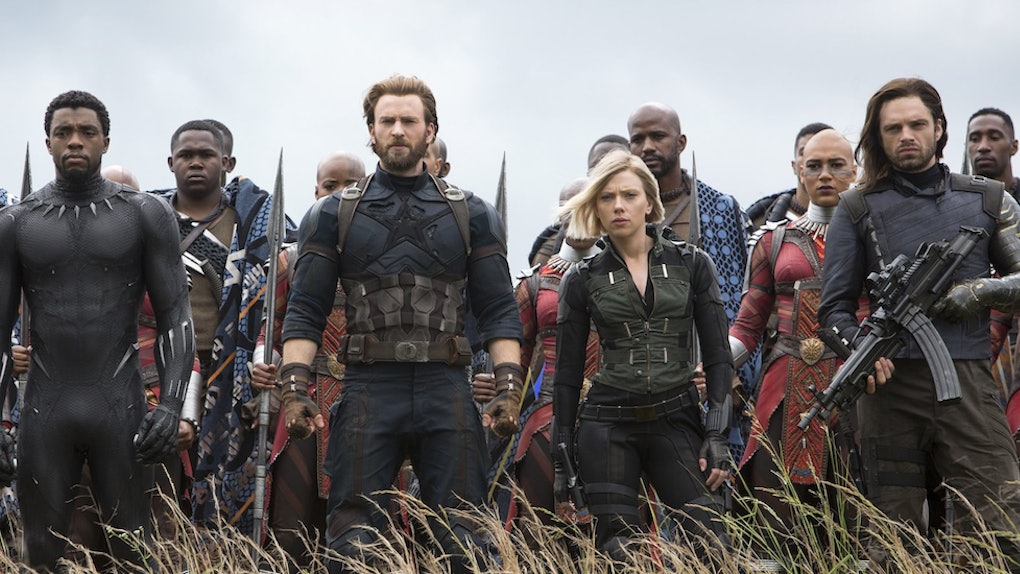 Captain America & Black Widow Are Going To Be Big Parts Of 'Avengers 4,' Say The Writers

After that massively shocking finale in Avengers: Infinity War, every Marvel fan is on the edges of their seats, waiting to see how next year's followup movie will pick up the pieces that Thanos' Infinity Gauntlet smashed apart. Well, now the writers of the upcoming movie are dropping some info about which members of the sprawling superhero team will take center stage in Avengers 4. Apparently, Captain America and Black Widow will be big parts of Avengers 4, which is great news for fans that were expecting to see more of them in Infinity War.

Marvel fans are rabid for any telling details about next year's Avengers: Infinity War followup, which has already been shot in tandem with Infinity War's production, and now screenwriters Christopher Markus and Stephen McFeely are dropping some hints. In a new interview with the New York Times, the writers shared that Captain America and Black Widow will have "a much bigger role to play" in the upcoming movie.

Although Steve Rogers and Natasha Romanoff are two of the original Avengers and very prominent in most of the Marvel movies, they took something of a backseat in Avengers: Infinity War. They showed up to help protect Vision and Scarlet Witch from Thanos' army at the beginning of the movie, and then reappeared to face Thanos with the whole team during the final battle in Wakanda. A big reasons for Captain America and Black Widow's scarcity in the movie was that most of Infinity War took place in outer space, where Thanos jumped from planet to planet to collect the Infinity Stones, but Cap and Black Widow remained completely Earthbound.

Some fans had likely already predicted that since Cap and Black Widow got short-changed in Infinity War, they will probably get a juicier part in Avengers 4. Plus, the last movie ended with half of the main cast turning into dust and blowing away in the wind, so of course we will be seeing the surviving Avengers more.

This confirmation that Black Widow and Captain America will have a larger role in Avengers 4 also seems to give more weight to the theory that this next movie will be the last hoorah for the original Avengers team. Some fans think that Marvel will use Avengers 4 to decisively shift the focus of their franchise away from the six Avengers introduced nearly a decade ago (Iron Man, Captain America, Thor, Hulk, Black Widow, Hawkeye) and towards the newcomers (Spider-Man, the Guardians of the Galaxy, Black Panther, Doctor Strange, Ant-Man, Captain Marvel). Since all of the original Avengers were left standing after Thanos' snap (presumably, Hawkeye is still around), it seems like a clear set-up for one last Avengers flick focused on the original team, possibly ending with the death or retirement of each of the six core Avengers.

Of course, we cannot be sure of anything until Avengers 4 comes out, so this is all still just speculation... even though Chris Evans' expiring contract does make it sound pretty likely. Until then, all we really know for sure is that we can expect a lot of Captain America and Black Widow in Avengers 4, as they work together to try to somehow resurrect or save their vanished friends and allies. Alongside Cap and Black Widow on center stage will likely also be the other original Avengers (Iron Man, Thor, Hulk, and the finally reappearing Hawkeye) and the other heroes who survived Thanos' snap: Nebula, Rocket Raccoon, War Machine, Okoye, and M'Baku.

If the fan speculation proves true, then we might be in for a tearjerker ending for Captain America in Avengers 4, so be sure to enjoy that increased screen-time as much as you can.

More like this
'Captain America 4': Release Date, Cast, Plot, Trailer, & More
By Cianna Garrison
Will Sharon Carter Be The Villain In 'Captain America 4'? This Theory Makes Sense
By Ani Bundel
TikTok's #NotTheMainCharacter Trend Shows The Supporting Role You Connect With Most
By Marisa Casciano
Stay up to date