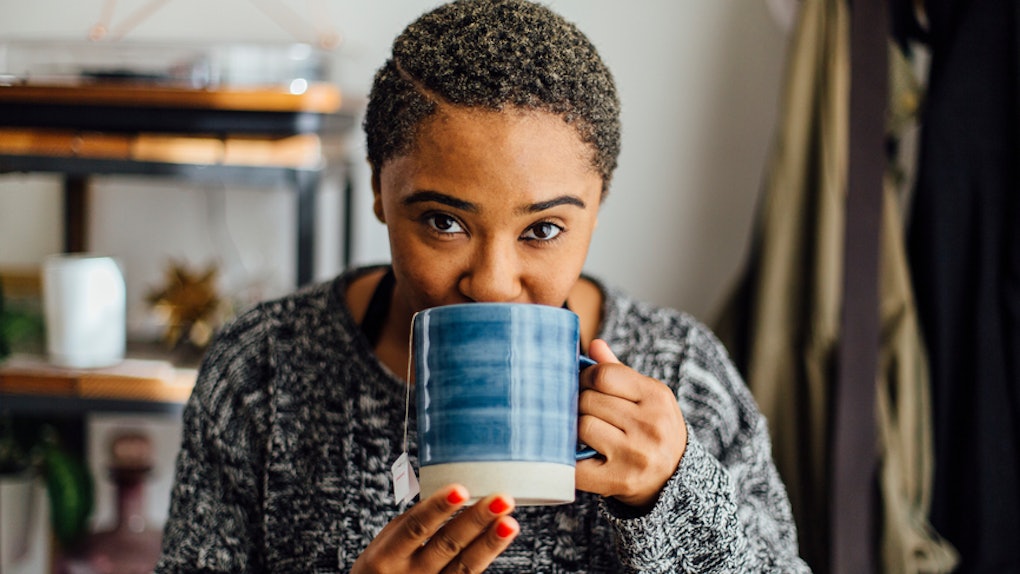 Can You Drink Tea Instead Of Water? Here's Why Tea May Actually Be The Better Choice

Not everyone likes to drink water, especially at the rate and volume it's suggested you do so. I mean, eight freakin' cups a day? When are you supposed to work or sleep amongst all the drinking and peeing? That being said, the importance of staying hydrated, whether you care much about it or not, is a necessity for your well-being, so it's in your best interest to find a way to get that H2O down your gullet, you feel me? Luckily, for the water-resistant among us, rumor has it you can drink tea instead of water, and still find your way to adequate hydration by other means that don't include filling and refilling your water bottle all the livelong day.

Of course, some people will contest this and say you need to curb your caffeine intake during the day, if for no other reason than the fact that it may affect your sleep and make you feel anxious. But in terms of tea, or even coffee, acting as an agent of dehydration, most experts say nay. In fact, according to Dr. Carrie Ruxton, a nutritionist who authored a study and survey published in the European Journal of Clinical Nutrition that looked at the health and hydrating benefits of tea, you're not only totally fine to replace straight-up H2O with mugs of tea, it might actually be the better option for you overall.

That's right — Dr. Ruxton told BBC that sipping tea all day may be even better for you than drinking water.

The nutritionist told the news outlet,

Drinking tea is actually better for you than drinking water. Water is essentially replacing fluid. Tea replaces fluids and contains antioxidants so it’s got two things going for it.

Ruxton's study (which was, full disclosure, funded by The Tea Council) was done to dispel some of the rumors going around that suggested tea dehydrates the body and potentially has a negative impact on your health because of all the caffeine in it. The nutritionist told BBC that, according to her and her colleagues' findings, black tea doesn't dehydrate you at all, even if you make what you think is a "really strong" cup of the stuff. She explained,

Dr. Ruxton added to the BBC,

Studies on caffeine have found very high doses dehydrate and everyone assumes that caffeine-containing beverages dehydrate.

But even if you had a really, really strong cup of tea or coffee, which is quite hard to make, you would still have a net gain of fluid.

Ruxton's findings suggest that tea can both hydrate your body and act as a preventative measure for things like heart disease, and even some types of cancer.

And how do a few tea leaves manage to do so much, you ask? Well, it all has to do with the helpful benefits of antioxidants and flavonoids that are found in tea. Flavonoids are basically chemicals in food (and plant leaves) that help prevent cell damage in the body, and as a result, they help reduce your risk of developing conditions such as heart disease and certain types of cancer.

But what about that whole, caffeine-is-a-diuretic (aka something that makes you pee a lot) thing? Well, according to Dr. Josh Axe, D.N.M., C.N.S., D.C., founder of Ancient Nutrition and DrAxe.com, this is more or less a bogus myth.

"Although caffeine can have a diuretic effect, this is only when it's consumed in large amounts," Dr. Axe tells Elite Daily. "Low or moderate caffeine intake, on the other hand, does not seem to increase your urine volume, so it works to hydrate the body."

BTW, Dr. Axe points out that the same is true of coffee, too — so rejoice, fellow lovers of espresso!

And remember, even if coffee and tea aren't really your thing, fruits and vegetables also contain plenty of water, along with a bunch of other good-for-you benefits, so eat up, my friends.