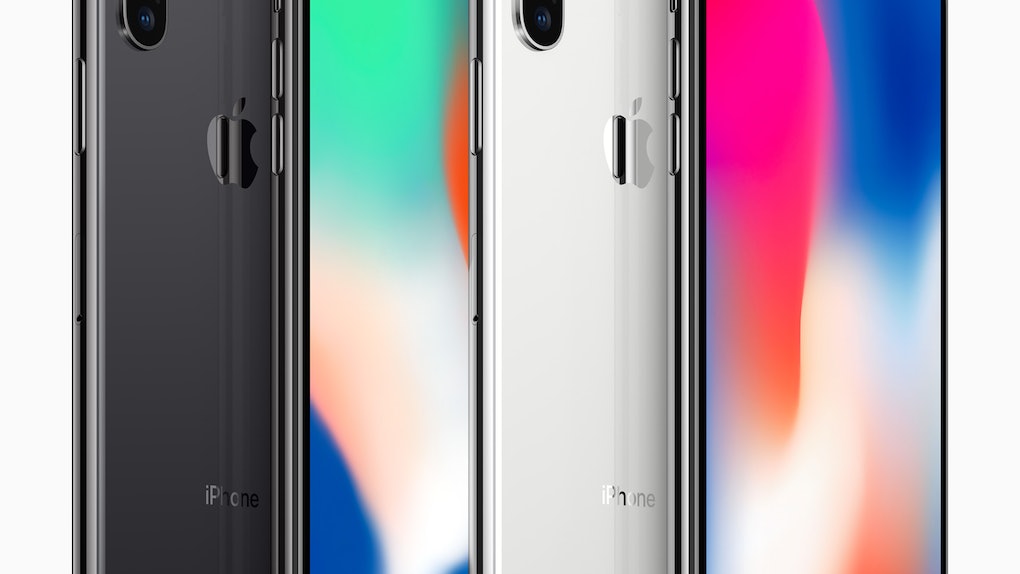 Can You Buy An iPhone X On eBay? Well, One Person's Selling

The iPhone X is finally available for preorder as of Friday, Oct. 27, which is a moment Apple fans have been anticipating since CEO Tim Cook announced its existence during the tech company's Sept. 12 keynote in Cupertino, California. In case you missed it: Apple's innovative new smartphone is jam-packed with all kinds of futuristic features like facial recognition and augmented reality, so it's no wonder people are ordering it in advance — despite its lofty $1K price tag. What's more, one person has chosen to capitalize on their successful preorder by listing their (undelivered) iPhone X on eBay for a whopping $60K. I kid you not. Their preorder!

It's as bizarre as it sounds, TBH. Mashable writer Raymond Wong pointed out the business side of buying and reselling popular items in his post re: the $60K iPhone preorder. He wrote, "I understand that it's simple supply and demand, and some of these sellers are legitimately just trying to make a living, and it's just simple business." However, he, too, was raising a brow at the major markup, continuing, "But seriously, what the hell, man?"

The eBay post in question features a screenshot of the seller's iPhone X preorder confirmation totaling $1,149 for a 256GB device in the Space Gray color. Like any other eBay item, the device (set to arrive sometime between Nov. 17 and Nov. 24, according to the order confirmation) has a product description penned by the seller. Highlighting some of the iPhone X's most desirable features, it reads,

Consider the benefits of this Apple iPhone X in Space Gray for any cellular service. This smartphone offers the most robust front and back glass design and surgical-grade stainless steel shell to minimize damage and increase resistance to dust and water. Yet, it still increases the speed of wireless charging. The iPhone X comes standard with a 5.8-inch screen which features a Super Retina HD display and face-recognition technology. With 256GB of internal storage, you won't find yourself having to delete apps or photos to add more.

Ah yes, I love that they chose to end with "you won't find yourself having to delete apps or photos to add more [storage]." As glorious as that is for someone like me who's forever running out of gigabytes, I still don't think it's worth $60K. Like, it would never be worth $60K, sorry.

Perhaps the most WTF thing about this reseller's insane price choice is the fact that the phone isn't going to be available to the buyer until mid-November — even though it officially hits stores on Nov. 3. So, say you have $60K lying around and choose to purchase this person's preorder, it's highly possible some of your friends might get the iPhone X before you for its (low when compared to $60K) retail price. No thank you! The good news is more affordable iPhone X preorders are available on eBay if you feel compelled to spend extra on one. Other sellers have similar listings priced between $6K and $20K. (Still crazy, but not as pricey as a year's worth of private college tuition, you know?)

Unfortunately, anyone lucky enough to preorder the iPhone X is likely to be plagued with delivery delays. They're apparently inescapable. $60K iPhone X person's preorder won't arrive until mid-November, and, as The Verge reports, there's a good chance some orders won't arrive until December — a full month post-launch.

It's a fun time to be an iPhone user, huh?