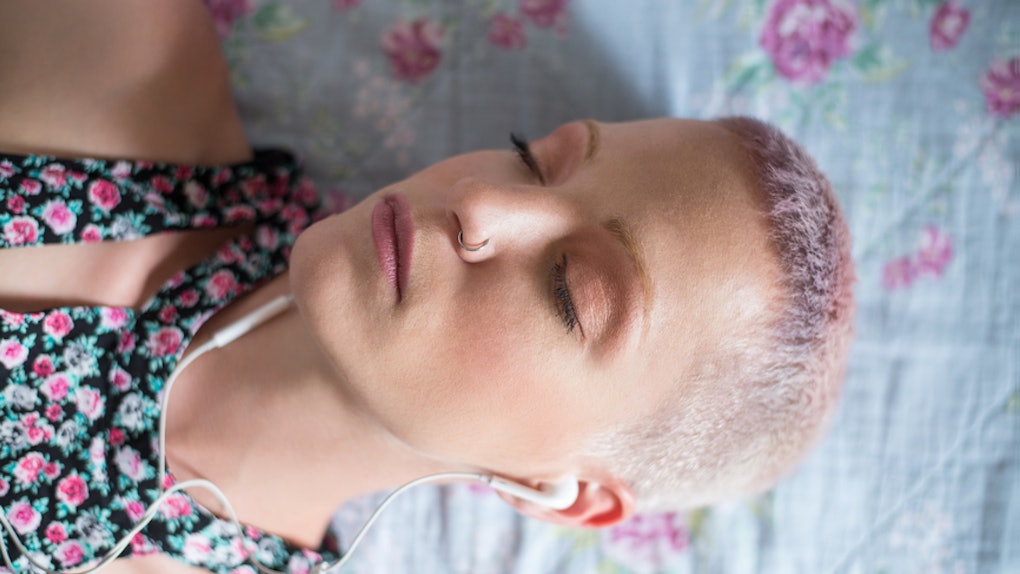 Can Music Help You Sleep? Experts Say Your Favorite Tunes Might Help You Snooze

Think back to when you were a little baby, and your mom or dad would rock you in their arms, humming or cooing a tune to ease you off to sleep. The phrase “lullaby and goodnight” is both lyrical and scientific-al, my friends, because just as quickly as your favorite playlist pumps you up, a stream of soothing music can help you sleep at night (or mid-afternoon for a cat nap, no judgment here). Sorry to break it to you if, for all these years, you assumed the parentals were just being cutesy; music was probably their go-to strategy to get you snoozing ASAP. After all, prime time television waits for no baby.

For as long as I can remember, music has always been a constant in my life, and I used it as a crutch to get me to sleep from elementary school all the way through college. When I was about 6 years old or so, I was infatuated with The Wizard Of Oz, so when my mom went out with her girlfriends, I’d make my dad watch it with me and beg him to sing “Ding-dong The Witch Is Dead” until I fell asleep on his lap. Eventually, I graduated from kiddie musicals to dance tunes (think house music for middle schoolers) that would blare from my headphones in the dark. I still don’t understand how I could ever fall asleep like that now, but way back when, I apparently thought it was magic.

Music helps you fall asleep by soothing both your mind and your physical body.

I never really understood how some people just aren’t moved by music. For me, music can stimulate all the feels: “Paralyzer” by Finger Eleven will forever be my pump-up jam, “Circles" by Jana Kramer gives me the fuzzies for my husband, and Sleeping With Siren’s “Iris” cover lulls me to sleep every time.

Generally speaking, when you set out to choose your sleepy-time soundtrack, you want to pick out songs that are slow, with melodies that you find comforting. Because music has such a strong effect on your mood and stress hormones, certified sleep science coach and founder of SleepZoo Chris Brantner tells Elite Daily, selecting “music in the range of 60 to 80 beats per minute,” like jazz, folk, or classical pieces, will “ease stress and help you calm down.”

It’s also helpful, Brantner continues, to choose songs that sound familiar to you. “Familiar melodies,” he says, “are often the most comforting.” Because the song structure is, in a sense, predictable, “it requires less active participation in listening,” so your mind can relax and enjoy the sounds.

What’s more, while the relaxing nature of certain genres of music puts your mind at ease, it also has a physical effect, as well. According to Jake Warren, a producer, composer, and co-creator of Zero Point, the human brain has the ability to pick up and respond to different sounds around you. Heart rate, breathing, brainwaves, and the chemical composition of the brain, he tells Elite Daily, “are all influenced by music.” Sounds can also be responsible for hormonal release, he adds, noting that while some cause you to release the stress hormone cortisol in response to danger, other sounds release dopamine to relax you.

Some music is actually developed specifically with the sole purpose of helping people fall asleep.

Clearly, there’s a formula to creating music that relaxes the mind and body, and because the recipe is seemingly easy to follow, producers are setting out to make music to help listeners fall asleep more easily. Considering the state of the world right now, I personally think everyone could benefit from more lullabies, don't you?

For example, according to a statement sent to Elite Daily, AXA PPP Healthcare is currently on a mission to determine whether work done by Eddie McGuire, an internationally renowned composer, or sounds produced by an artificial intelligence machine, will be more successful in helping citizens of the UK fall asleep. It's an interesting set-up, right?

Bede Williams, a leading musician, academic, and head of instrumental studies at the University of St. Andrews, hand-picked McGuire to compose an original lullaby, entitled “Lyrical Lullaby,” that would contain all the elements necessary to put both children and adults to sleep. They focused on stringing together “descending patterns in the notes” that have a sedative effect on the human mind, “inducing in us a state of restfulness.”

As for the machine, Ed Newton-Rex, founder and CEO of tech hub Jukedeck, trained his technology by using folk music. According to his statement in the release sent to Elite Daily, he noticed that “folk music and lullabies share lots of the same musical elements,” so he took that knowledge and ran with it. Pretty clever, guy.

Additionally, Warren, as previously mentioned, co-created Zero Point (which you can download now on Spotify) specifically to help people snooze quicker and longer. The project, he tells Elite Daily, was inspired by a 2008 study that showed how relaxing, classical music could reduce sleep problems. Basing their notes on this discovery, Zero Point “guides listeners through the several sleep stages we typically go through during the night” and steers the mind away from stressors and distractions, like wandering thoughts and feelings of stress.

Still, if classical music isn't your thing, you could also benefit from listening to more natural sounds when you're trying to sleep.

I can remember sleeping over my sister’s dorm back when she was in college, and when it was time to go to sleep, she turned off the lights and put on a series of whale noises. To me, it just sounded like a bunch of loud, whining sea creatures, but for her, it was soothing, and she was out like a light within minutes.

Animal noises might not be my (or your) thing, but Brantner suggests giving other nature sounds a try, like “babbling brooks and rain” to ease your mood. And even though there may not be a ton of evidence to support if white noise leads to better sleep quality, these sound machines are popular for a reason: they get the job done. Find what works for you, and let the music be your guide to a good sleep.