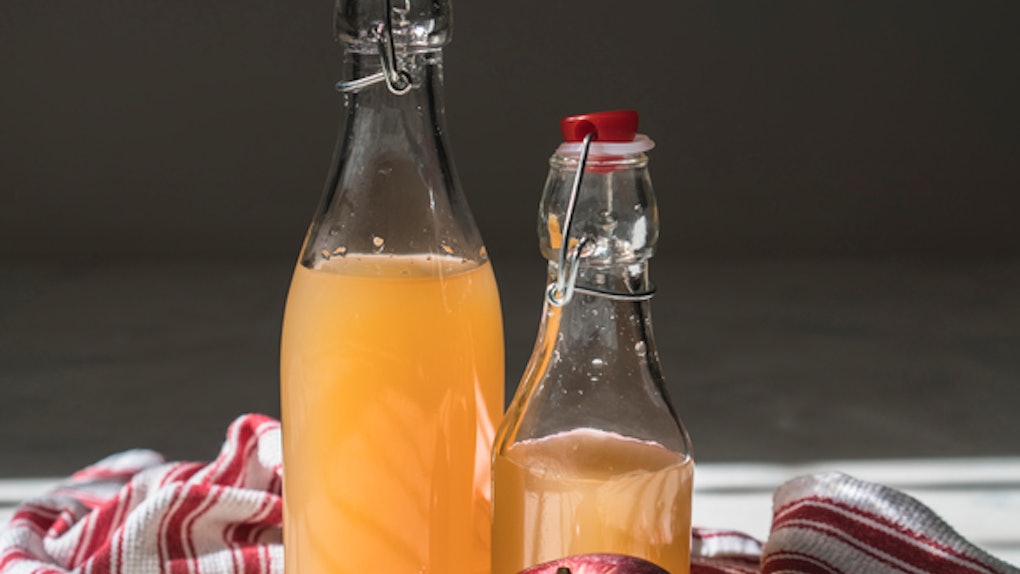 Can Apple Cider Vinegar Help A UTI? It Can, But Probably Not In The Way You Think

Apple cider vinegar is everyone's favorite secret weapon, which, yes, might mean it's not actually a secret anymore, but that's another story we don't need to get into right now. ACV can clear your complexion, boost your immune system, and balance out the pH levels in your body. For all of these reasons, it's worth considering how ACV might help you combat that annoying infection that seems to keep coming back again and again: Can apple cider vinegar help a UTI?

Since apple cider vinegar is becoming an increasingly popular solution for all sorts of internal and external bodily afflictions, it was really only a matter of time before women all over the world began to wonder if they could get rid of that burning pee sensation when they pee without having to go to a drugstore for the umpteenth time that year.

After all, urinary tract infections are one of the most common infections that women contract. Over seven million women a year make doctor's appointments for urinary tract infections. What's more, roughly 20 percent of women who have a UTI will experience another one, and 30 percent of those will have multiple beyond that. Honestly, it's pretty much like the common cold for your vagina.

Here's the truth: There's a connection between apple cider vinegar and urinary tract infections, but not in the way you'd think.

ACV is an excellent deterrent for a urinary tract infection, but once you actually have one, the last thing you should do is attempt to cure it with ACV. At first, this seems to make no sense. But let's break it down a bit.

The connection between apple cider vinegar and urinary tract infections lies in your body's pH balance. A urinary tract infection, though most commonly associated with your vagina (and that painful burning sensation when you pee), is actually an infection in any part of the urinary system, including the kidneys, bladder, and urethra. The infection happens when bacteria enters the urinary tract and multiplies (usually in the bladder) until it grows into a full-blown infection. This can happen for any number of reasons, but most often it happens as a result of having lots of sex within a short period of time. (With the good, there always come a little bit of bad.)

This is where apple cider vinegar comes in as a preventative treatment.

Apple cider vinegar is a highly acidic liquid that is excellent for balancing out the pH of your body. Since UTIs tend to occur as a result of an infection, and infections usually thrive in non-acidic areas, it follows that a diet with apple cider vinegar could make a UTI feel very unwelcome in your body.

To get your anti-UTI fix, try drinking a glass of water with a tablespoon of apple cider vinegar in it once a day to keep the bacteria from having the opportunity to multiply and grow within your urinary tract.

However, once you actually get the UTI itself, apple cider vinegar is the last thing you should use as a solution.

The same acidic qualities of ACV that can prevent a urinary tract infection from happening could actually lead to increased inflammation and pain once the UTI sets in.

Because ACV is so acidic, it won't feel too great sliding past an already inflamed organ. As a result, your pee might burn even more powerfully if you try to combat a pre-existing UTI with apple cider vinegar.

If you're someone who's prone to getting UTIs, it's an awesome idea to start incorporating ACV into your diet as a form of preventative treatment. But if you already see the symptoms of a urinary tract infection manifesting, your best bet is to go to the store, buy a ton of cranberry juice, and your favorite over-the-counter prescription to clear that bad boy up as soon as possible.

ACV may be an amazing home remedy, but it's not a miracle worker.

More like this
The TikTok Recipe You Should Try, Based On Your Zodiac Sign
By Chelsea Jackson
These 40 Clever Vaccine Selfie Instagram Captions Deserve A Shot On Your Feed
By Rachel Chapman
The Trendiest TikTok Recipes Of All Time That You'll Want To Taste With Your Buds
By Kelly Pau
Stay up to date