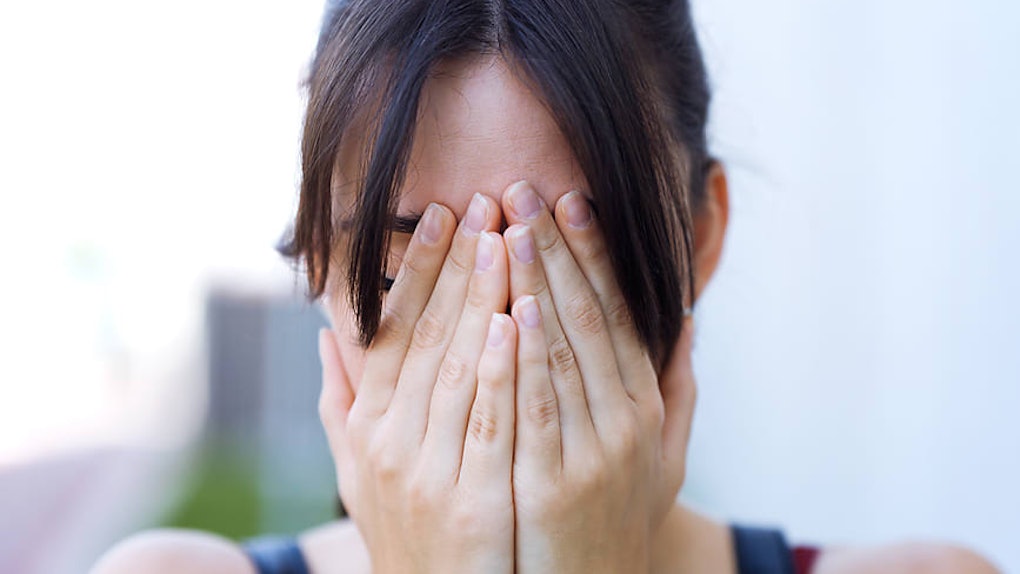 Can Alcohol Trigger Migraine Headaches? Apparently They Can, So Here's How To Cope

If you deal with migraines on even a semi-regular basis, then you know how utterly debilitating they can be. You've also probably started to figure out what triggers them for you. And if you've ever wondered whether it's that extra glass of merlot, my friends, well, you might be onto something. Alcohol can trigger migraine headaches for some, according to the results of a new study, so all that spiked egg nog and Aunt Glenda's rum punch might be a slight danger for your aching head this holiday season.

The new study, which comes from Leiden University Medical Center in the Netherlands, explored the effects that booze can have on migraines and found that, unfortunately, the two are not a great match for one another.

For the study, which has been published in the European Journal of Neurology, researchers surveyed over 2,000 people between 18 and 80 years old who experience migraines, and asked questions related to the participants' alcohol consumption, migraine triggers, as well as any reasons they might have for abstaining from alcohol altogether, if that applied to their lifestyle. The researchers also asked the participants about the time between alcohol consumption and the onset of a much-dreaded migraine attack, as per a ScienceDaily press release.

After gathering the responses, the researchers found that there definitely appears to be a link of some kind between alcohol and migraines. According to the ScienceDaily press release about the study, alcoholic beverages were reported as a migraine trigger by more than 35 percent of the survey respondents. What's more, 25 percent of the participants who said they've either stopped drinking alcohol, or have never really done so in the first place, cited migraines as the reason for their abstinence.

But is there a difference between, say, a glass of wine and a can of beer when it comes to how it can affect a migraine? According to this study, at least, it's possible: The researchers' results showed that red wine was repeatedly recognized as a common trigger for a migraine. However, the survey's findings also showed that having a tall glass of red led to a migraine attack in only 8.8 percent of participants on a consistent basis, so, take that for what it is.

Of course, you might be wondering whether a migraine could potentially be confused with a hangover in this context. Like, once alcohol is in the picture, how can you really tell the difference between a pounding hangover and a pounding migraine?

Well, according to this research from the European Journal of Neurology, it's all about the timing. A third of the participants in the survey who cited alcohol as a migraine trigger said they tend to experience the symptoms within less than three hours of having a drink, and nearly 90 percent said they typically get a migraine within less than 10 hours of having a drink.

Senior study author Dr. Gisela Terwindt, of the Leiden University Medical Center, said in a statement, as per the ScienceDaily press release,

However, the ScienceDaily press release explains, the study authors have noted that the jury is still out as to whether "alcohol is a factual or a presumed trigger," meaning more research needs to be done on the subject to determine whether alcohol itself is really playing a role in people's migraines, or if there's a different, and perhaps more subtle trigger at play.

Even so, if you get migraines on the reg, and you have a sneaking suspicion that they might be caused by drinking, perhaps it's not a bad idea to opt out for awhile, or at least drink a little less than you usually do, until you can really hone in on what exactly triggers the pain for you.

And listen, I know that might be difficult to do during this time of year, given the many holiday gatherings I'm sure you've been invited to, where it might be a little awkward to keep turning down festive cocktail after festive cocktail. But if you really want to steer clear of any potentially migraine-inducing drinks this holiday season, Carrie Carlton, a licensed clinical social worker at Beachway Therapy, says it's all about being prepared. One way to do this, she tells Elite Daily in an email, is to bring your own non-alcoholic beverages to parties. Additionally, as a general rule, she recommends trying to stick to the events where you know you'll be comfortable telling people you don't want to drink.