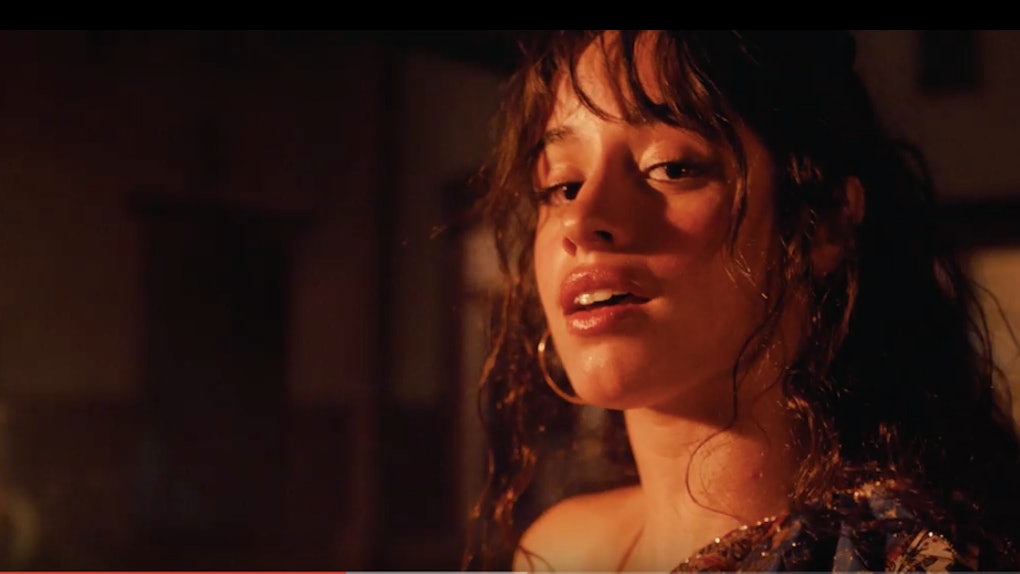 Camila Cabello just dropped some new music, so happy Thursday, y'all! "Shameless" and "Liar" are her first solo releases since 2018. The tracks are from her upcoming album Romance, and they both are pretty much straight fire. And have you seen Camila Cabello's "Shameless" music video yet? In it, the sultry singer runs down a dark street and confesses her sins to a priest. There's also lots of flames in the background, plus a bunch of Camila clones with long, curly locks dancing behind her in matching red dresses. The whole thing is just so sexy and intense!

Like, I said... it's super intense, and I am so here for all of it! But don't just take my word for it, check the full music video out for yourself below.

Cabello first announced that she'd be ushering in a new era of music on Sept. 2 when she dropped a short teaser on her Instagram Story. In the clip, the "Havana" crooner was shown with a heart-shaped lock on her chest. After it was opened by a magically floating key, it unfurled to reveal the inner-workings of Cabello's heart, which included a revolving hourglass and a big white house. Then the words: "Welcome to the world of Romance" appeared on the screen:

The teaser came shortly after Cabello posted another video on IG on Aug. 30 titled "What Do I Know About Love?"

"What do I know about love? Nothing," she asks at the beginning of the two-and-a-half-minute clip. "Where does the love go when it runs out? When does it leave? Why does it die? What do I know about love? I know love has no mercy for anyone. Rich. Poor. Independent. Codependent. Confident. Insecure. It will bring you to your knees if you did it right."

The themes of love and romance in Cabello's new music aren't all that surprising, given her reported relationship with Shawn Mendes. In fact, in an interview for the October 2019 issue of Elle, the singer admitted that this year was the first time she ever actually experienced the feeling of love IRL.

As for all those rumors that her ~love~ for Mendes may be fake?

"People can say whatever they want to say," Cabello told Elle. "They can speculate, but at the same time, we are going to live our own lives, enjoy it, and fall for each other like nobody is watching."

Looks like we're not gonna get any official confirmation of Shamila's status anytime soon, fam. But at least we now have eight Camilas to watch in "Shameless" to watch on repeat.