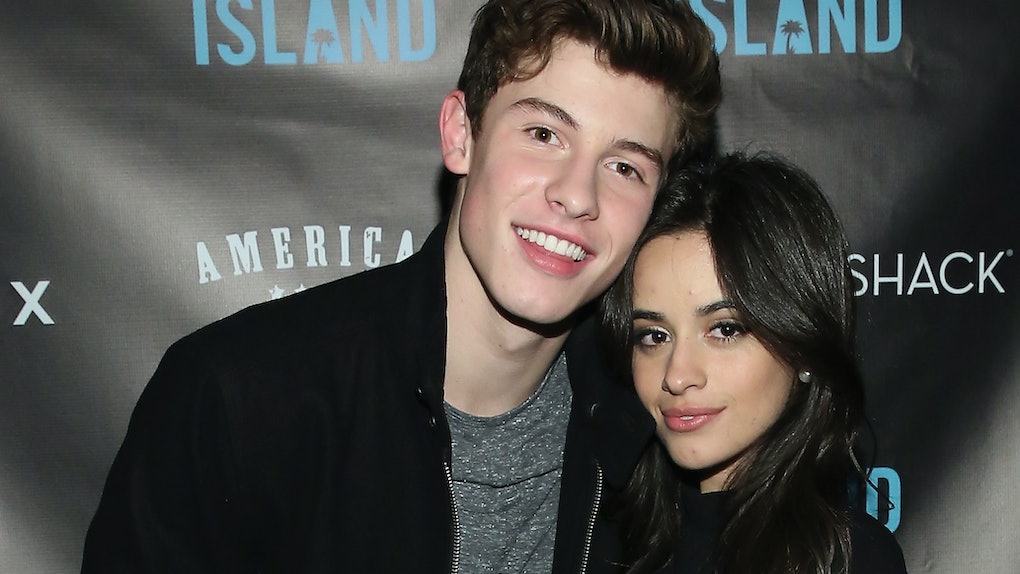 Ever since Shawn Mendes and Camila Cabello made their duet debut with "I Know What You Did Last Summer" in 2017, fans have noticed that the two singers have chemistry. While both stars previously denied being a couple, they've since been spotted kissing and holding hands in several cities this summer. Their passion for each other is so intense that some people are now wondering if, well... it could be real. These tweets claiming Shawn Mendes and Camila Cabello's relationship is "fake" are potentially kind of convincing. (Elite Daily reached out to reps for Mendes and Cabello for comment on the tweets and did not hear back in time for publication.)

After Cabello split from her boyfriend Matthew Hussey in June, the same month "Señorita," her new duet with Mendes, dropped, the singers have been regularly spotted by the paparazzi looking like they're, you know, more than friends. For instance, Us Weekly reports the two were spotted just casually holding hands in West Hollywood on July 4.

"They were sitting with each other, facing each other and look very intimate," an eyewitness told Us Weekly. "They left together holding hands." In addition to the eyewitness' testimony, paparazzi also managed to snap pictures of the two walking hand-in-hand.

Most recently, the two were reportedly spotted kissing each other at a cafe in San Francisco on July 13. Neither Cabello nor Mendes have confirmed or denied the existence of their relationship, so we still can't be totally sure. But some fans are still not convinced that their relationship is 100 percent legit. So much so that they've even taken to Twitter to share that theory that the relationship is a publicity stunt to promote "Señorita."

This fan thinks the two pop stars are giving an Oscar-worthy performance.

This fan thinks they would've maybe been cute under other circumstances.

This fan called it a "tacky" PR stunt.

This fan thinks Mendes is keeping quiet for a reason.

This fan totally believes it's just a PR stunt.

This fan has a pretty logical explanation for why it might be one.

This fan's mom is convinced it's PR.

This fan is left questioning who's worth stanning.

This fan felt uncomfortable after seeing the reported kiss.

This fan thinks anyone who believes the relationship is real is "gullible."

This fan is seriously questioning the intelligence of anyone who believes the relationship is real.

This fan is hurt by how "fake" it seems.

This fan just thinks it's PDA made for PR.

This fan has two pretty good reasons for why it would be fake.

This fan thinks the PR angle is obvious.

OK, so a lot of fans think their relationship is fake...

... but some fans still believe.

Despite what fans think, the jury is out on what their relationship status really is. The two could be involved in a publicity stunt. They also could legitimately be in a loving relationship. Conversely, the could also just be friends who occasionally like to make out. TBH, it could really be anything and nobody except Mendes and Cabillo know the truth about how they feel about each other.

So, I guess all we can do is sit back, relax, and wait for one of them to either confirm or deny the rumors.