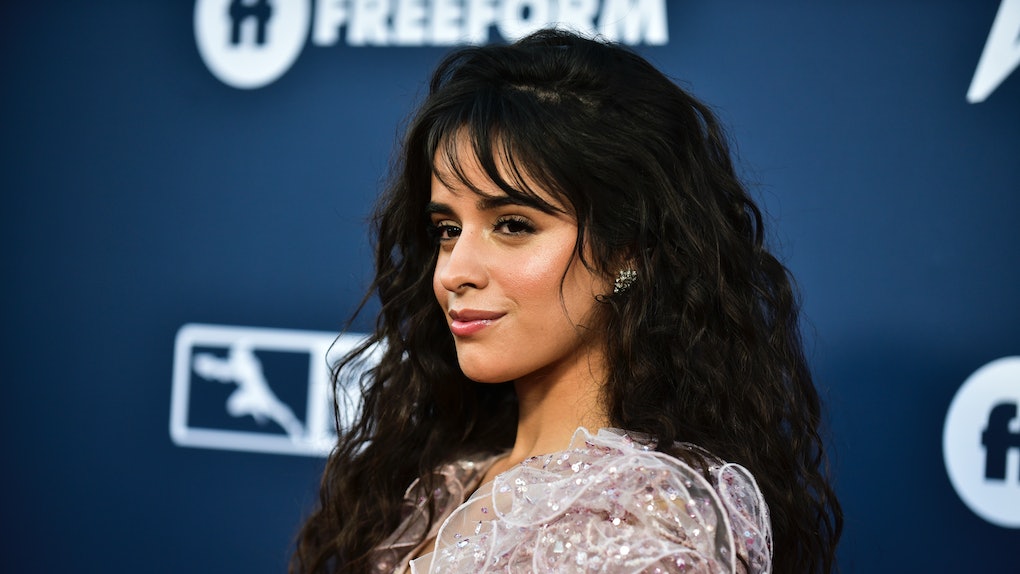 Camila Cabello is hot as Havana, and I don't think anyone can disagree with that. The only thing sexier than Cabello might just be her music. Though the former Fifth Harmony member does sing about heartbreak and longing, Camila Cabello's lyrics about love are where things really get spicy. Her forthcoming album is called Romance, after all, and with things (maybe) heating up between her and Shawn Mendes, I expect that her new music is going to be steamier than ever.

So many of Cabello's songs revolve around desire. Sometimes she sings about knowing what she wants but being afraid to give in to temptation. Sometimes she sings about being consumed by love and unable to escape. Her songs aren't necessarily inspired by particular exes or lovers (as far as fans know anyway), but it's hard not to wonder if at least some of these songs were inspired by Mendes, especially one of her two new singles, "Shameless." Whether she had Mendes in mind when she penned any of these songs or not, one thing is clear: Cabello has love on the brain. These Camila Cabello song lyrics are filled with longing, and if they don't turn you on even a little bit, you're probably lying.

"Never Be the Same"

"Never Be the Same" is about an all-consuming love that's totally transformative but also pretty dangerous. While clearly smitten, Cabello also sings about how this person's love has the intoxicating effect of chemicals, able to lower her inhibitions and keep her coming back for more.

Cabello acknowledges that this is the kind of love she should run from, but says "it would be useless" to even try, because she'll never be able to quit this person.

With its catchy Reggaeton tune, Cabello makes it clear that "Inside Out" is meant to be straightforward and lighthearted. She has her eye on a person, and she wants to know everything about them. And once she has them, she has no intention of letting them go.

Cabello assures this person that, once they have her love, they won't be able to think about anyone else. "'Cause once you're with my love," she sings, "there will never be enough."

In "Shameless," one of her first singles from her new album, Cabello sings about wanting a person so badly that she's willing to abandon her pride for them. For so long, she's only dreamed of being with this person, but now she's ready to speak her intentions loud and clear.

So many mornings I woke up confused / In my dreams, I do anything I want to you / My emotions are naked, they're taking me out of my mind

"I need you more than I want to," she sings, and though she wishes that her desire didn't make her so vulnerable, she's helpless to contain that desire any longer.

Some people are harder to let go of than others. In "All These Years," Cabello sings about a person she still harbors feelings for, even years after their relationship has ended. Her love is so great that even the smallest interaction can take her back to the time when they were together.

That person has no idea she still feels this way, and though they've since started seeing someone else, Cabello still regrets never making her feelings known. "But does she kiss you like I kissed you?" she asks. "Ooh, I wish I loved you like I miss you."

"Only Told the Moon"

"Only Told the Moon" is all about a secret crush that Cabello is only comfortable divulging to the moon. "I told her that I'm scared that all my thoughts, they look like you," she confesses. What she really wants the moon to tell her in return is whether he thinks about her, too.

So how are you? How you've been? / Lately I wonder how it feels to taste your lips / Nothing much, just fine I'm doing well / And you can read between the lines but God, I fell

While she's too nervous to tell her crush how she feels, she only hopes that he feels the same way, too — and that he'll read between the lines and know the crush is mutual.

The lyrics for "Señorita" are just as hot and full of lust as the music video, which is almost too sexy to handle. Just like in "Never Be the Same," Cabello sings about an instant connection that turns into a love she "should be running" from, but that passion is just too difficult to resist.

Ooh, when your lips undress me / Hooked on your tongue / Ooh love, your kiss is deadly / Don't stop

"I wish I could pretend I didn't need you," she sings, though she admits that — even if she were to leave — she would just come back for more.

"Consequences" describes the aftermath of a breakup, and Cabello reflects on a relationship that was once sweet but ultimately became destructive. Though there were warning signs that she couldn't change this person and that they would let her down, the love was fun and freeing before it soured.

"Every siren that I was ignoring, I'm payin' for it," Cabello admits, and the love that once felt wonderful eventually became a love that felt "dumb, dark, and cheap."

"Into It" is all about desire. In the song, Cabello knows that hooking up with this person is pretty much inevitable, and she wants to act on her passion without discussion. "Don't even ask the question," she tells that person, with that question no doubt being, "Do you want this as badly as I do?"

Whatever trouble that you're thinking, I could get into it / I see a king-sized bed in the corner, we should get into it / All of the things I wanna do to you is infinite / I mean, if you're into it, I'm into it

"Enough of the conversation, baby, let's get into it," Cabello sings, because her yearning for this person is so great that she simply wants to fulfill it rather than to question it.

In "Bad Things," Cabello describes a "complicated" love that she doesn't think anyone else would understand. Just like in "Never Be the Same," she sings about how this relationship is like a drug, and though their love is rough and carnal, it's what they both want, and they don't care what other people think.

She expresses that what they do in the privacy of their bedroom is only their business, and if they want to do "bad things" to each other, then they're going to do them.

Only time will tell whether Romance is just as sexy as the rest of her music, but I think it will be worth the wait. But TBH, I'm not sure how much longer I can wait for her and Mendes to officially clarify their relationship status. Camila, I know you're busy, but if you could let me know where you and Shawn stand when you get a chance, it would be appreciated.