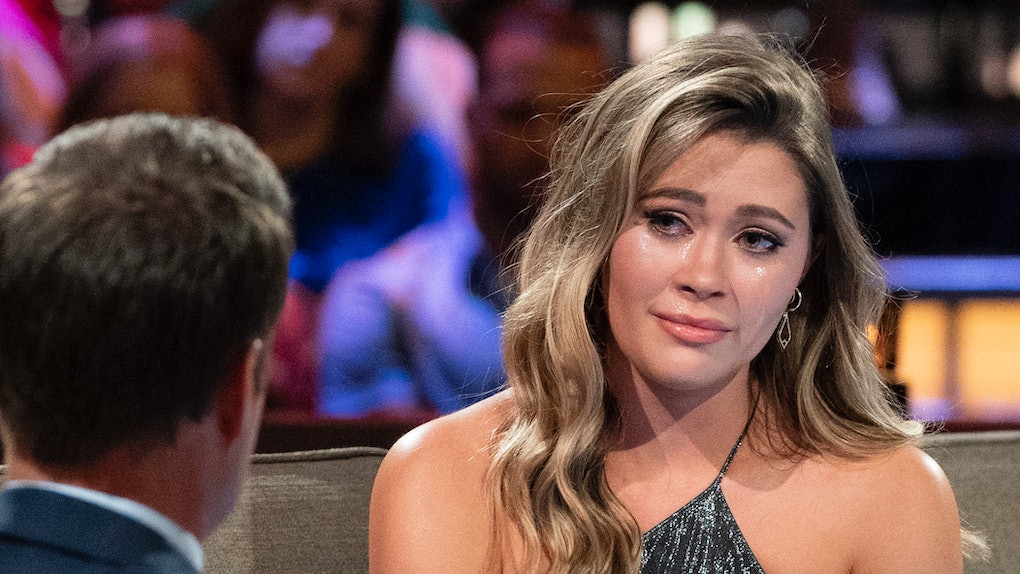 There's a song that says the world is meant for beauty queens, but judging by Caelynn's tears on The Bachelor's "Women Tell All" special, she hasn't heard it. The former Miss North Carolina spent her time in the hot seat tearing up about what she once had with Bachelor Colton Underwood, and I'm sure we could all relate to her rehashing the details of her heartbreak. However, Caelynn and Colton's discussion on "Women Tell All" fell flat, and Caelynn definitely didn't receive the closure she wanted.

Emerging as one of Colton's frontrunners early in the season, Caelynn was initially a favorite among fans too. On her first one-on-one date with Colton, she opened up about being a sexual assault survivor, and when it came to her side of her pageant feud with Miss Alabama Hannah B., Caelynn originally came across as the more stable one in the argument. Her flattering edit took a negative turn when other women began accusing her and her BFF Cassie of wanting Bachelor fame more than they wanted a relationship with Colton. Caelynn denied these rumors, but the way she reacted to the gossip wasn't exactly the nicest.

Despite seeming to have a strong relationship with Colton, Caelynn's hometown date in Virginia would be their last outing together. Although Cassie and her hometown visit reeked of uncertainty and doubt, Colton gave her a rose rather than the more vocally committed Caelynn. Understandably, the cut pageant queen was totally blindsided, telling Colton at the time, "I saw it. I have never felt like this in a relationship, and I felt like we just had this connection from the start. I feel like an idiot."

Any women who unexpectedly meets heartbreak on The Bachelor is inevitably due for some one-on-one time with Chris Harrison on the "Women Tell All" special. She first had to hold her own when Katie confirmed the Bachelorette-related conversation that happened between Caelynn and Cassie. Long story short, they wanted whoever didn't get engaged to become the next lead, although Katie claimed the term they used was "winning." Meanwhile, Caelynn still insisted she was genuinely in love with Colton.

Then while speaking to the host, Caelynn, 23, confessed that she was so sure it would be her and Colton together at the end of the season. "Feeling not loved back sucks and feeling like you met your person... watching this back, each episode I'm reassured there was love there," she tearfully said. "I think we all felt we had a connection... but with me, I knew something was different."

She still didn't understand what went wrong between them, so when it was time for Colton to address the women, a shaky Caelynn getting answers from him was a top priority.

We now know that Colton was so in love with Cassie that he couldn't fathom sending her home. Caelynn might've figured that out by now, but it seems that both of them were a little reluctant to address that elephant in the room. When talking to him, Caelynn said the hardest thing for her was having no real explanation behind her elimination for her family. Colton blamed the mood of that particular rose ceremony, regrettably admitting he gave her no closure and was unsure if he could give her any more reasoning for his choice.

Well, that was a little anti-climatic. We can't all have amicable breakups, but it looks Caelynn and Colton may not be able to move on to being friends any time soon. Maybe they can attempt a better resolution off camera.