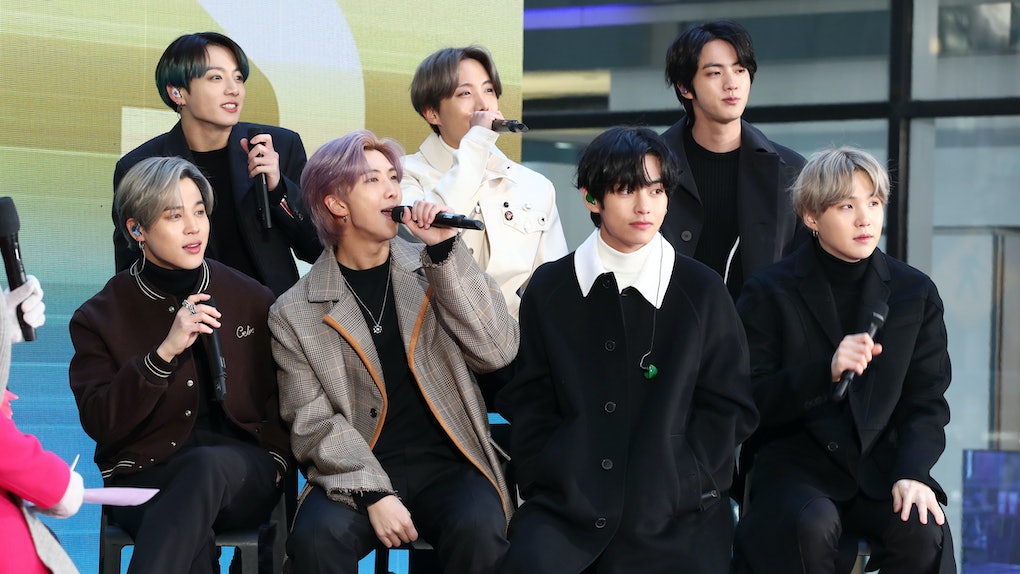 No one is more excited over BTS' 2020 Grammy nomination than the boys themselves. After receiving the exciting news they are up for their first-ever Grammy at the 2021 awards show, they shared their reaction to Twitter for ARMYs to see. BTS' video reacting to getting nominated for a Grammy is the best thing you'll see all day.

BTS has notoriously been snubbed by the Recording Academy in years past, but not this time around. It's finally BTS' time to shine at the Grammys with their single "Dynamite" receiving a nod for Best Pop Duo/Group Performance. Moments after receiving the good news on Nov. 24, they uploaded their reaction video.

In the clip, four of the bandmates, Taehyung, Jungkook, Namjoon, and Jimin, were seen waiting anxiously as the 2021 nominees were announced. When their name was finally announced, they leapt up and cheered with excitement. Taehyung may have kept his cool the entire time, but that's probably just because he had a feeling they would get the nomination all along.

While fans felt it was a snub the band didn't receive a nomination for Record of the Year or Album of the Year like many fans had predicted, they were still thrilled to see them get nominated in a major category at music's biggest night.

You can see the band's reaction to their Grammy nomination below.

Fans were elated to see BTS receive a nomination, and their endearing reaction video only added to the excitement. ARMYs couldn't get over the special moment.

Fans loved seeing the bandmates so happy. "THIS TRANSITION IS MAKING ME EMOTIONAL. LOOK AT HAPPY THEY ARE OMG," another person tweeted.

ARMYs were living for the moment Namjoon threw his phone out of sheer excitement.

BTS performed at the 2020 Grammy Awards with Lil Nas X, and while this year's list of performers has yet to be announced, fans have their fingers crossed they'll hit the stage again. Either way, it looks like there's a good chance the guys will be making an appearance.