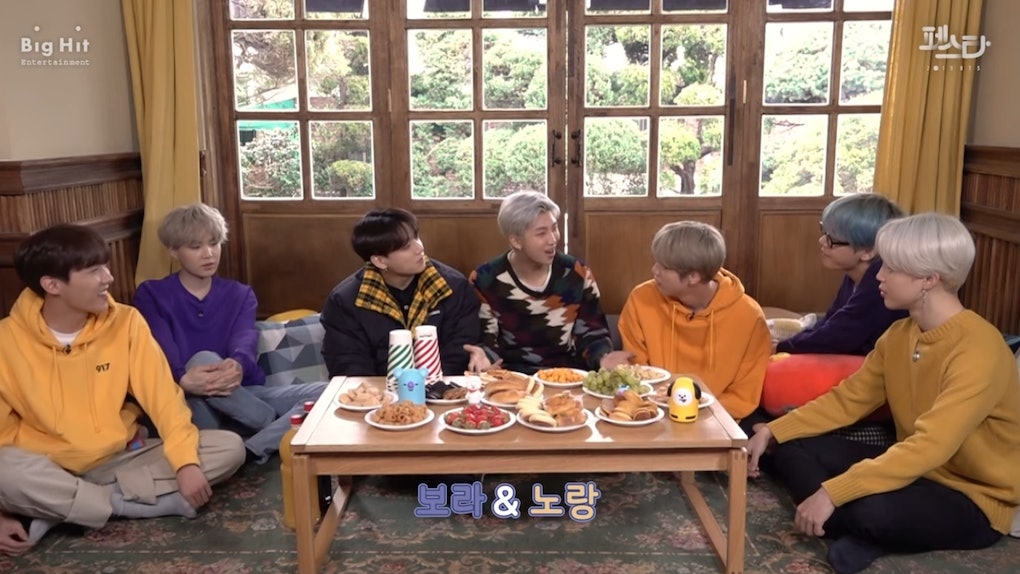 The world knows BTS as "the biggest boyband in the world," "next generation leaders," "princes of pop," and more, but in 2013, they were just Bangtan Sonyeondan, a seven-member group with a dream of sharing their music and message with the world. You know the Drake lyric, "started from the bottom now we here"? Well, that perfectly describes BTS' success because they worked tremendously hard to get to where they are today. They went from handing out flyers for a free concert to effortlessly selling out stadiums across the world. Although they've achieved fame and success, BTS is still made up of the same humble guys they were back then. But BTS quotes about how they've all changed since debuting in 2013 reveal how much RM, Jin, Suga, J-Hope, Jimin, Jungkook, and V have grown and how they're actually not the same guys as before.

You're probably wondering why I'm getting all sappy about BTS' debut days, but BTS actually started it, so it's not my fault. June 13 marked the group's six-year anniversary since their debut. In the weeks leading up to the date, the group shared a ton of content (both old and new) with ARMYs. The two-week event is known as BTS FESTA, and for the final day, the guys shared their hour-long "Bangtan Attic" video, in which they discussed all things, from their childhood memories and dreams for the future, to — you guessed it — their debut days.

J-Hope was up first and he described Suga. He said, "I looked up the old videos we did, and seeing Suga, what should I say...I noticed he had this massive energy. He's become more himself now." J-Hope wondered if Suga was really like that, but Suga revealed that it was because he felt like he had to be that way in order to stand out.

Suga said that "Jungkook started all of this before understanding himself," and that he really struggled.

He added, "At some point, he's overcome that. and he knows who he is now. 'Grown up' isn't the word I'm looking for, but he's become more human now. Before, he was more of a child."

"Compared to how he was before and now, Jungkook is the most understanding now," V added.

J-Hope agreed, chiming in with, "What should I say... He has a bigger heart now."

Jungkook said that he remembers having a lot of fun together during BTS' early days, but looking back now, he realizes that because RM is the group's leader, he must have felt a lot of pressure.

"He had so much on his mind. He tried not to let it show, but he struggled," Jungkook said. "That went on for a long time. I hoped he would monitor less... But that wasn't easy for him. Right?"

He also looked at RM and said, "I think you're doing that less these days. I can tell that RM is more relaxed now."

Jimin definitely understood what Jungkook was talking about. "I talked to him for three hours because of what you said. Four hours before our morning schedule, I told him we should talk. I sat him down and told him not to be like that for three hours."

RM said that he's found more productive ways to block out all the noise since then — his hobby of collecting. "Wandering around and collecting stuff, I've found things that can comfort me. That makes me feel better, so now I can brush off what others say."

RM said that at the beginning, Jin wanted different things than their label, and "he had to lock away what he wanted to do at the start." Through the years, Jin has learned to open himself up more, and RM said that Jin has "become more natural."

"I think that's important. I don't know what's inside his heart, but I find him natural now, and he's an awesome guy I'm comfortable with," RM shared.

Jin admitted that he didn't understand V much in the beginning. "Taehyung, not long since our debut, just like RM couldn't get me, I couldn't understand him," Jin revealed. "It was something like this. When you say not to do something, some people do it more. He was unique like that. With time, we talked a lot about that. We asked him to mind certain stuff. But after having all those talks, I think he's changed so much. Out of everyone in the group, he's had the most positive changes."

He thought V was "unique" and "free-spirited" and that's what drew people in to the group. Jin said, "Taehyung's become an awesome guy."

In response, V shared that his outlook on happiness has changed a lot. "I think what makes me happy has changed," V said. "What made me happy before was when everything was great for me. But now, having all seven BTS members happy together is what makes me truly happy. That change has made who I am today. I think seeing the good in things can make you happier."

V revealed that Jimin's concept in their debut days affected his personality. Around when they first debuted, he seemed a little "sensitive," he shared. "Sensitive because he was anxious. He's a good friend, and I can even say he's my best friend."

V went on to reveal that the beginning stages of their friendship wasn't so smooth, though. "We're very different people, and he was sensitive about that difference we had, so it was hard for me to reach him. But as time went by, he's become less anxious."

V has a theory about what made Jimin's anxiety so bad: the lack of a creative outlet. "Back in our 'Danger' days, he didn't have many songs to express himself," V shared. "After trying that out, it didn't suit him. Who Jimin is now suits him the best. And now he has many BTS songs to express himself. I think that's why he's less anxious."

"My personality was strange for sure," Jimin acknowledged as the group agreed, albeit with the caveat that they were all a little strange back then.

J-Hope was probably the easiest to describe, because according to the boys, he's changed the least. Jimin said, "He's the same nice and awesome guy and good as he has always been."

Wow. I haven't recovered from hearing the piano version of "Euphoria" or watching Jimin's tribute video to ARMYs, and BTS went ahead and did this. That's OK. Whatever. I'm OK. No, I actually I'm not. If you feel like crying for the next hour or so, too, then watch BTS' "Bangtan Attic" video below. BTS start talking about how each member has changed around the 23:30 mark.

Happy BTS FESTA, I guess? Even though it's over now and I'm in tears. At least I'm not alone, right ARMY?